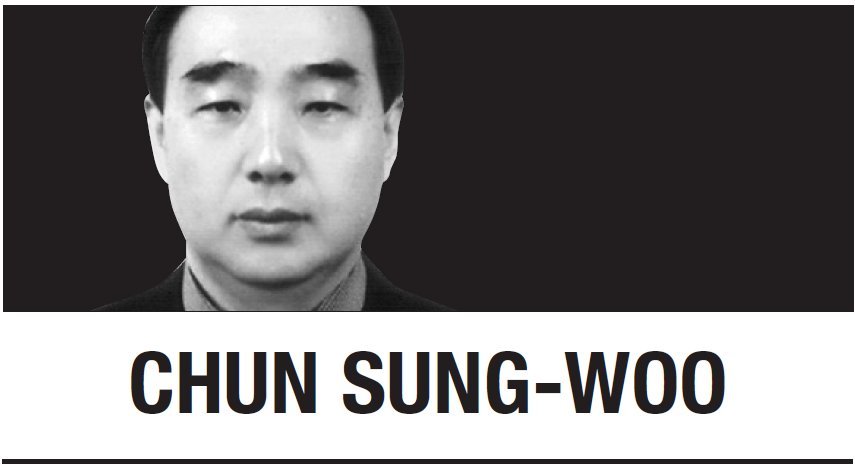 Two years ago, the curtain rose on a new play.

It was billed as a show never imagined before. The director said his play would depict a society without privileges and misconduct. He put up a sign that read, “Opportunities will be equal, the process fair and results righteous.”

The title of the first act was “Elimination of Evils.”

Only misconduct by conservatives and rightists was uncovered. Over 100 people who worked for the previous government were indicted, and more than half of them were put behind bars. Four took their own lives during investigation. A well-known businessman was locked up and later released. For the first time in history, two former presidents were arrested and their trials are ongoing.

On the other hand, those on the other side enjoyed privileges. They expelled senior officials from public organizations and took their positions.

The government discouraged real estate speculation, but a spokesman of the presidential office bet all he had on a building, then stepped down amid boos from onlookers.

Despite comments that the drive to eliminate evils has gone far enough, the director has no intention to end this play. Many critics now call the first act “New Evils and Hypocrisy.”

The title of the second act was “Income-led Growth.”

From the beginning, experts had expressed concerns this was too experimental. They noted that growth leads income, not the other way around. People had also wondered what the title meant, questioning if related policies would improve their lives.

However, they were assured the economy would get better and were told to wait.

The minimum wage was hiked sharply and working hours shortened. Then side effects came about. Low income earners lost their jobs, and the poor became poorer. Eventually, growth turned negative for the first time in 16 years.

Experts called repeatedly for a change of course but their advice fell on deaf ears.

Rather people heard their leader say, “The tide is rising. Now is the time to row the boat.” “Economic fundamentals are still solid.”

Meanwhile, the chief architect of the growth policy effectively confessed that it had failed. He said he had been an idealist, but insisted his idealism was rooted in reality. He left the country for China to serve as ambassador.

As economic indicators went south, a task force was formed, though its job was not to fix problems but to find and publicize the bright side of the economy. In addition, the head of a national statistical service was replaced.

Most critics were harsh on the second act, also known as “The Cart Put before the Horse.”

Furthermore, a scene titled “Nuclear Phase-out” was shocking. Its script appears to be inspired by a movie about nuclear accidents. The country’s world-class nuclear industry began to crumble fast. Spectators were dumbfounded as the protagonist tried to sell nuclear plants that he had tried to dismantle to foreign leaders he met during overseas trips.

The third act was bigger in scale and international, titled “The Denuclearization of North Korea.”

But it appears that the North Korean leader had no intention to do so. The storyline has gone back to where it began.

The North Korean leader effectively told the South Korean president to stop being “a meddlesome mediator. Behave in the interests of North Korea without minding the US president.”

Still, the South Korean president’s faith in the North Korean leader was unshaken. He believed adamantly that North Korea would denuclearize if sanctions were eased and the South helped the North. However, the US president was not convinced and appeared to keep a distance from the South.

To the surprise of everybody, North Korea abruptly fired new weapons, which looked like missiles. South Korea, however, insisted they were not ballistic missiles and said it wants to give food to the North to restart dialogue.

Reviews were somewhat mixed, but the third act is now called “Reckless Belief.”

This play runs for five years. Many onlookers have already grown sick and tired of it.

Still, at least 40 percent of the audience seem to continue to applaud. Spectators will evaluate the play a year later. Attention is now on whether the play will be able to go on.


Chun Sung-woo
Chun Sung-woo is an editorial writer for The Korea Herald. He can be reached at swchun@heraldcorp.com -- Ed.