[Elizabeth Drew] Trump is now above the law 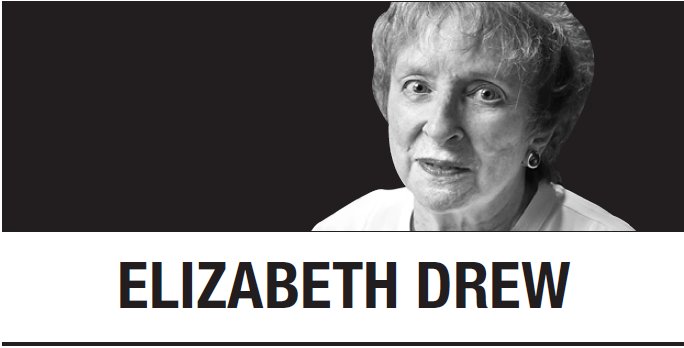 Things have gotten ugly in Washington since the release last month of special counsel Robert Mueller’s report on Russian interference in the 2016 US presidential election, and they’re about to get uglier. It’s now clear that the United States has an attorney general who believes his job is to protect the president, facts be damned. During his testimony before the Senate Judiciary Committee last week, William Barr, the country’s top law-enforcement official, obfuscated and lied with contempt and abandon.

Barr’s self-designation as President Donald Trump’s defense attorney and fixer came as no surprise to those who recall how, as attorney general in President George H.W. Bush’s administration, he helped to cover up the Iran-Contra scandal of the late 1980s. He auditioned for his second stint in the post by writing an unsolicited 19-page memo arguing that, by definition, a president cannot obstruct justice, and that Mueller’s investigation of that issue was thus “fatally misconceived.” It is his preposterous position that a president can block an investigation of himself if he believes it’s unfair.

In Barr, Trump finally has his Roy Cohn, the infamous New York attorney who got Trump out of various legal scrapes. Trump was furious that his first attorney general, Jeff Sessions, recused himself from the Russia investigation, and eventually fired him. Despite providing 10 examples of likely obstruction, Mueller observed a questionable Department of Justice guideline against indicting sitting presidents, abstained from deciding whether Trump should be charged, and called on Congress to decide. But Barr stepped in to declare Trump’s innocence, first in a March 24 letter to Congress ostensibly summarizing Mueller’s conclusions, and again in a bizarre press conference 90 minutes before he released a redacted version of the report. In his Senate testimony, he claimed not to understand why Mueller declined to decide about obstruction charges. By the time Barr testified, his March 24 letter had been discredited.

The day before Barr’s Senate testimony, the Washington Post disclosed that Mueller had written to Barr to object that his letter “did not fully capture the context, nature, and conclusions” of the report. Mueller urged Barr to release Mueller’s own summaries of the two volumes of the report. By writing his own and waiting to disclose the report, Barr gained time to spin a false narrative about its findings -- “total exoneration,” as Trump put it. Though Mueller would not recommend charging Trump, his report said explicitly that it wasn’t exonerating him. More than 450 former federal prosecutors have since signed an open letter stating that, but for the Justice Department guideline, Trump would have been charged with obstruction.

After overseeing a two-year investigation with no leaks at all, Mueller’s “going to paper,” as it’s called in government circles, was extraordinary. It is understood that the writer intends such communications to become public. In his Senate testimony, an obviously annoyed Barr dismissed Mueller’s letter as “snitty,” and said that it was “probably written by one of his staff people.”

More significantly, after Barr had received Mueller’s letter, he testified to the House Appropriations Committee that he didn’t know how Mueller felt about his own March 24 letter. Now that Committee members knew Barr had already received Mueller’s letter, they called on him to resign. Nancy Pelosi, the Democratic Speaker of the House, accused Barr of lying to Congress, noting that this was “a crime.”

Barr disgraced himself in his Senate testimony and emerged badly bruised. Not surprisingly, he refused even to show up for a scheduled House Judiciary Committee hearing the next day. (Ostensibly, he objected to the committee’s plan to have staff counsel ask questions -- a routine matter.)

The question now is whether House Democrats will launch impeachment proceedings against Trump. So far, Pelosi has resisted this, fearing a partisan brawl that would rally the Republican base to support Trump all the more fervently. And, because the Republican-controlled Senate is unlikely to provide the two-thirds vote needed to convict Trump and remove him from office, she believes that Democrats should devote their energy to defeating him in the 2020 election. And a Democratic victory had to be decisive, she said recently, or Trump might challenge the result and even refuse to leave office -- a prospect that has gained currency in Washington.

On the other hand, failure to hold a president accountable between elections could set a dangerous precedent and encourage even more authoritarian behavior from Trump. Even if Senate Republicans continued to protect Trump (privately, most believe him to be dangerous), House Democrats could still make clear that the president’s behavior was unacceptable.

Pelosi has insisted that, “We’re not there yet.” Both she and Trump appear to be stalling for time -- at some point, it will be too close to the 2020 election to launch an impeachment process. But events may force Pelosi’s hand. Trump is now trying to shield himself against further inquiries, not just into the Russia matter but also into his business practices (he’s the first president in decades not to disclose his tax returns), and whether his private dealings affected his foreign policy. “It’s done,” he proclaimed, portraying the Democrats as obsessed with investigating him rather than getting on with issues that interest the public -- a charge many Democrats fear. Trump now opposes allowing current and even former officials to testify, and his administration is ignoring congressional subpoenas. And, well acquainted with the power of television, he reversed himself and opposes a congressional appearance by Mueller. Similar behavior served as the basis of one of the three articles of impeachment brought against President Richard Nixon.

Meanwhile, Trump is leaving the door open for Russia to come to his aid again in 2020. The White House and congressional Republican leaders have been blocking a bill to secure US elections against foreign attacks. And administration officials have been instructed not to raise the issue of Russian interference with the president, lest it cast a shadow on his legitimacy.

The next phase in this affair is already coming into focus. Barr, with the help of Trump’s golfing buddy Lindsey Graham, the Republican chair of the Senate Judiciary Committee, is now enlisted in peddling the president’s fantasy that the Mueller investigation was a “witch hunt” orchestrated by “deep-state” supporters of Hillary Clinton. Once again, current and former FBI agents will be targeted, either because they expressed criticism of Trump or because they opened a national security investigation into a hostile power’s meddling in the US presidential election (which continued in the 2018 midterms). FBI director Christopher Wray, commenting on the Mueller report, said that the Russians are “upping their game” for 2020.

With the attorney general’s office corrupted and a complaisant Republican Party, a vengeful Trump is set on placing himself above the law. The next round of bloodletting is coming, and innocent people are going to get hurt.