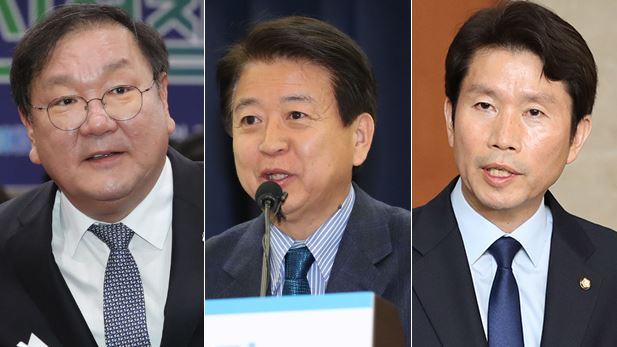 [1] The race to become the next floor leader of the ruling Democratic Party is heating up, with all eyes on who will be selected to lead the party through multiple tasks and next year’s general election.

[2] The party is slated to elect its next floor leader Wednesday from among three three-term lawmakers: Rep. Lee In-young, Rep. Noh Woong-rae and Rep. Kim Tae-nyeon.

[3] The election comes amid deepening conflict between the ruling party and the Liberty Korea Party due to the recent fast-tracking of key reform bills, which has prompted the main opposition party to stage protests across the country.

[4] Lee and Kim are widely expected to lead the race based on their solid support base and strong presence, political analysts said.

[5] Noh, who has joined the floor leader bid for the third time, is also making all-out efforts to garner support from fellow party members.


2. Woman, 28, dies after being hit by two cars on expressway

[1] A woman in her 20s was killed by two consecutive collisions on an expressway that occurred at 3:52 a.m. Monday.

[2] Gimpo Police Station said it had obtained video footage from the dashcam in the woman’s car, a Mercedes-Benz C200, showing that she stopped in the middle lane of the three-lane expressway with emergency lights on, got out of the car and moved to the back. She was soon struck by a taxi. She was then hit again by an SUV.

[3] She died in the ambulance from head injuries while being taken to a nearby hospital.

[4] The two other drivers are being investigated on suspicions of speeding in the death of the woman.

[5] The woman’s husband, who was in the passenger seat prior to the accident, told police he and his wife stopped the car in the middle lane of the Seoul-bound Incheon Airport Expressway because he had to go to the bathroom.