Last year alone, the country saw a record inflow of 3.8 trillion won ($3.2 billion) of venture investment. The figure for the first quarter of this year is poised to set a quarterly record.

Based on such explosive growth, veteran venture capitalist Chung Sung-in, who took the helm of the Korea Venture Capital Associations two months ago, projected that venture investment would hit 5 trillion won ($4.28 billion) over the next two years.

But though optimistic, Chung bears a heavy responsibility leading one of Korea’s government-led associations for venture capitalists, founded in 1989.

“My top priority will be changing the perception toward the industry to see it as a truly independent one,” Chung told The Investor in a recent interview. “Venture capital is not a mere tool to support SMEs or venture companies.”

Chung said the industry is betting on the upcoming enactment of the Promoting Venture Investments Act, which is pending at the National Assembly. It combines two similar but different laws: the Support For Small and Medium Enterprises Establishment Act and the Act on Special Measures for the Promotion of Venture Business, which have been criticized for raising regulatory hurdles.

It may not be perfect, but the enactment of the laws is an important stepping stone that will enable the venture capital industry to fine tune the legal framework, Chung said.

Chung has worked in the venture capital industry for 40 years. After graduating from Seoul National University, he began his career at KTB Network -- one of the oldest venture capital firms, which began as an investment arm under the government in 1981.

He founded Premier Partners in 2005. The company’s most popular fund’s recent portfolio includes Cafe24 and Bluehole, a game developer behind “PlayerUnknown’s Battlegrounds.”

The CEO believes it is time to shift his focus to industry-wide efforts to change the culture of the venture capital industry.

“Now I want to do something for this industry. Things I couldn’t say or do as the CEO of a venture company, I want to raise important, industry-wide issues and make changes.” 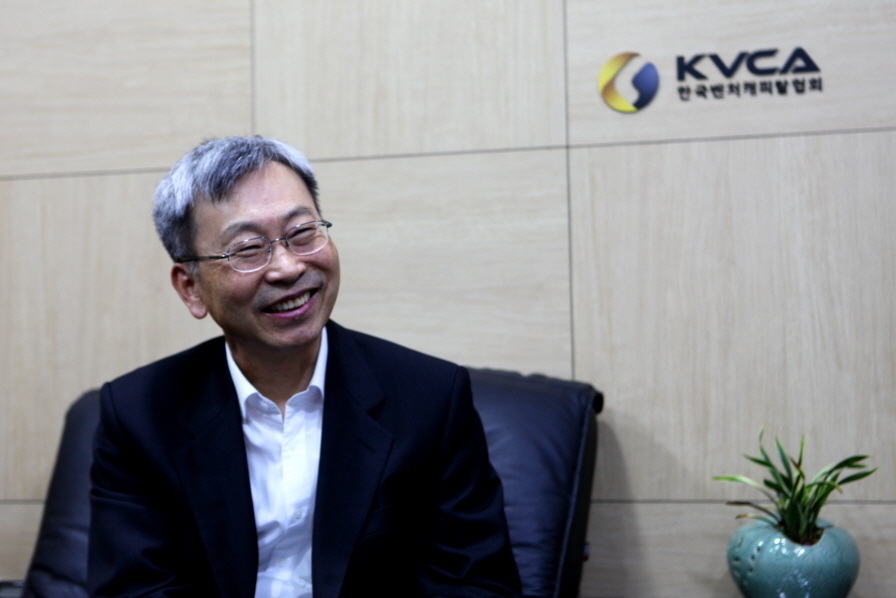 One of the biggest problems is that Korea has not fully embraced the venture capital culture of high risks and high returns.

The public has high expectations toward Korea’s venture capital companies, as they were initially developed by the government as policy tools to promote small and medium companies. Therefore, when members of the public hear about failed investment attempts, they berate such companies for wasting taxpayers’ money.

Chung hopes to change such negative perceptions during his term -- or at least help create the right setting for eventual change.

He also wants to help recruit more investment professionals, including those who have experience outside the industry, and create an ecosystem under which venture capital investment can become a long-term plan and not a short-term exit scheme.

Touching on global standards, Chung said Korea’s venture capital should go overseas for two reasons: The first is to get familiar with the advanced systems of developed countries and the second is to utilize their experience to seek better opportunities outside the increasingly saturated domestic market.