Kim looked for an ingredient she had not used before and settled on one that would be familiar to everyone.

“We eat rice every day,” she explained why she focused one of the most basic and essential staples of the Korean diet.

“It was harder than we thought because rice itself does not boast a strong flavor,” she elaborated.

To create layers of flavors, textures and aromas, Kim and her team drew inspiration from Korean cuisine, including nurungji -- the roasted crust of rice at the bottom of the pot -- and makgeolli -- a fermented rice wine.

To infuse the cake with a nutty flavor, nurungji was ground and incorporated into a rice mousse that was then perched over a layer of makgeolli ganache and a dacquoise made with brown rice.

Shaped like a grain of rice, the resulting dessert is incredibly delicate and aromatic, boasting floral and umami nuances, likely from the makgeolli, along with nutty and buttery notes from the mousse, while the dacquoise at the bottom, closely resembles a monaka shell, a wafer crafted from glutinous rice, in texture and flavor.

Rice makes another appearance in the form of a macaron at Happy Happy Cake. Puffed grains of rice coat the sweet treat, with its rich ganache center and chewy, soft almond meringue shells.

In addition to rice, Kim also uses other ingredients familiar to the Korean diet like locally sourced mugwort and yuja to create her toothsome macarons.

Kim and her team also demonstrate a knack for infusing their desserts and drinks with a savory kick.

Gorgonzola cheese imparts a rich, addictive funk to a buttercream ganache as the center of one of Happy Happy Cake’s macarons. Cool, creamy with a fermented endnote, this macaron begs to be paired with a glass of sparkling white wine. 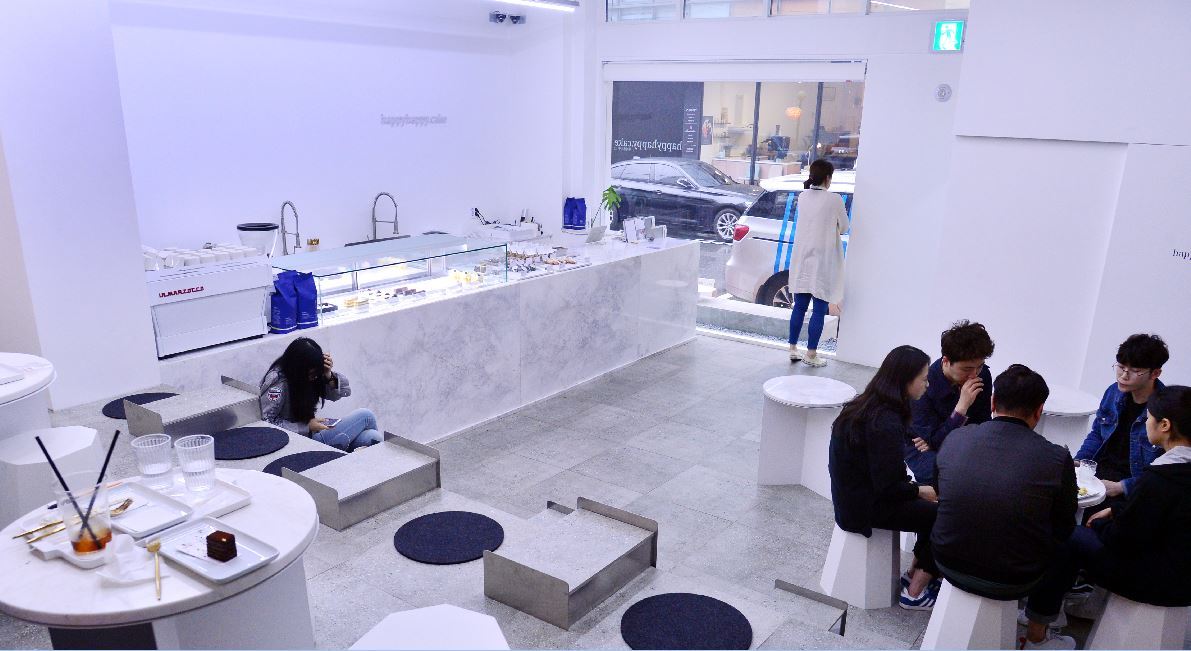 Salinity amps up the sweetness of the salt coffee at Happy Happy Cake, which features a salt-infused cream that is layered over the coffee.

Over seven years have passed since Kim first swapped a full-time job at an electronics company for baking, which initially started out as a hobby.

Kim still remembers when she first opened an atelier to hone her baking skills. Then she started to teach classes before opening a dessert shop in Bundang.

This January, Kim decided to expand to a second location in Seoul’s Nonhyeon-dong.

At Happy Happy Cake’s latest perch, Kim created a spacious, multi-tiered spot where she and her team could teach classes and where customers could stop by for desserts and tea or coffee.