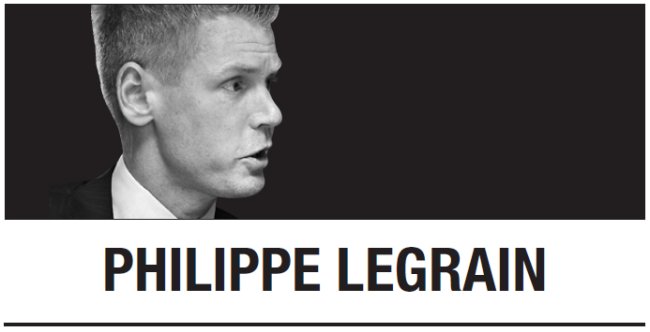 Europeans can’t agree on how to handle a rising China. While European Union leaders were gathering in Brussels recently to discuss a more assertive common approach, Chinese President Xi Jinping was visiting Rome. Xi was there to mark Italy’s independent endorsement of the Belt and Road Initiative, his $1 trillion pan-Eurasian infrastructure investment plan that aims to bolster China’s economic and political influence. So much for a unified EU stance.

How, then, should the EU engage with China? As the United States and China stumble toward a new Cold War, each wants the Europeans in their camp. US President Donald Trump’s administration barks at Europeans to follow its aggressive lead in confronting China over trade, technology and security. Meanwhile, China woos the EU by pointing to their shared interest in defending the multilateral trading system, the Paris Agreement on climate change, and the Iran nuclear deal against Trump’s attacks.

Ideally, the EU ought to chart its own course. But as long as it remains weak and divided, it will struggle to do so.

Until recently, the EU considered China a strategic partner -- and primarily a source of growth and jobs. But its new draft China strategy, developed by the European Commission and the EU’s External Action Service, is tougher and more nuanced. China is now regarded simultaneously as “a cooperation partner with whom the EU has closely aligned objectives, a negotiating partner with whom the EU needs to find a balance of interests, an economic competitor in pursuit of technological leadership and a systemic rival promoting alternative models of governance.”

Like their American counterparts, albeit less vehemently, European policymakers increasingly fret about the challenge from an authoritarian, statist and technologically dominant China. The centralization of power in Xi’s hands and the overtness of his “Made in China 2025” industrial policy, which seeks Chinese dominance in 10 key high-tech sectors, have dashed earlier European hopes for political and economic liberalization. Europe’s politicians are increasingly receptive to business complaints that China is buying up EU firms and their technologies while denying reciprocal access to Chinese markets.

Given this, the EU ought to be a natural ally for the US in seeking to open Chinese markets and safeguard foreign investors’ intellectual property. But Trump has no time for allies, labels the EU “a foe” and threatens a trade war with Europe over its huge trade surplus with the US, notably in cars. EU policymakers hate Trump’s unilateral protectionism and his “America First” worldview. And they don’t trust him, rightly believing that Trump could readily cut a deal with China at the EU’s expense. As a result, the EU is understandably loath to line up behind Trump’s China policy.

That provides an opening for China, which makes all the right noises about multilateralism and has a genuine interest -- at least for now -- in sustaining the open, rules-based international system. Furthermore, it engages seriously with the EU; Premier Li Keqiang is due in Brussels on April 9 for the annual EU-China summit. But at the same time, China is undermining the EU by negotiating with European governments bilaterally and playing them off against each other.

In this regard, China has established the “16+1” forum to engage with 16 countries in Central and Eastern Europe, 11 of which are EU members. Because these countries are poorer and are often treated as second-class Europeans by the likes of France and Germany, they particularly welcome China’s attention and investment.

China is also pouring funds into southern European economies that have been starved of investment since the eurozone crisis. It has invested in the port of Piraeus in Greece and Portuguese energy companies, and now plans to revamp the Italian port of Trieste. In total, 15 of the EU’s 28 member states have so far signed up to the Belt and Road Initiative.

To be sure, Chinese investment in Europe is often beneficial, and increased trade and improved infrastructure are mutually advantageous. But, like the US Marshall Plan after World War II, Belt and Road also has a political dimension -- namely, drawing Europe into China’s sphere of influence.

That raises fundamental long-term strategic questions. Does Europe’s future really lie primarily with Eurasia rather than with the West? If so, what would being China’s junior partner entail? And how, then, could Europe best advance its interests? Unfortunately, hardly anyone is posing these questions.

The EU is not only divided, but also weak. Although an economic colossus, the EU is a geopolitical dwarf ill-equipped for this new era of great-power competition.

True, a united EU can impose itself against lesser powers such as the United Kingdom, and hold its own with the US and China in purely economic terms. Its $19 trillion single market gives it huge clout in trade negotiations, competition policy and setting regulations and standards.

But when economic policy intersects with foreign policy and security, the EU lacks the will and capacity to act strategically. Apart from France and the UK, which is leaving the EU, member governments lack a geopolitical mindset. The EU itself has no military power, and most of its members rely on the US for their defense. Moreover, the EU is increasingly a consumer of cutting-edge digital technologies developed elsewhere.

The upshot is that the EU finds itself caught between the US and China. It desperately needs to discover the sort of common purpose and strategic capacity that French President Emmanuel Macron seems to be almost alone in advocating. Until then, the EU will struggle to advance its interests and will be increasingly likely to fall victim to great-power plays.