Back from injury, S. Korean midfielder looking to create synergy with young players

After a yearlong absence due to a right Achilles injury, Kwon earned the opportunity to resume his international duty after making it on the South Korean football squad for friendly matches against Bolivia and Colombia this month. 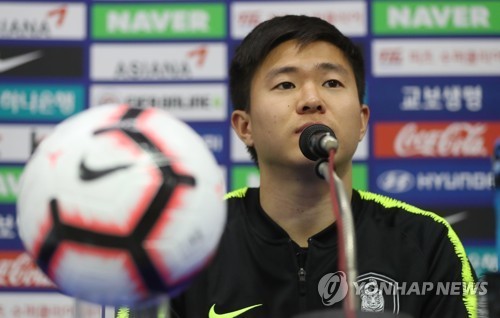 The Dijon FCO attacker will make his first appearance under head coach Paulo Bento if he plays against Bolivia at Munsu Football Stadium in Ulsan on Friday. Kwon's last match with the Taeguk Warriors was in March 2018 against Poland.

"Son is doing lots of things as a captain, and we know that he has a big influence on the team," he said. "I'm sure Son will do fine as captain in any situation."

Kwon, 24, is also joined by young players on the national team such as Lee Kang-in, the 18-year-old from Spanish club Valencia CF, and Kim Jung-min, the 19-year-old from Austrian club FC Liefering.

"There are many young players, and they are giving this team great energy with their fighting spirit," he said. "If we can work as one, I'm sure there will be synergy between us."

Asked about his encounter with Bento, Kwon said he is satisfied with the Portuguese's coaching style.

"He explains this team's philosophy in detail, so that the players can understand it easily," he said. "After experiencing Bento's style of football, I thought about what I should do for this team. I think I still have lots of things to learn."

Kwon, who can play both flank and center midfield, said he will give his best when he gets playing time in his national team return.