Owner and chef Choi Hyo-ui and creative director Lee Jae-hoon teamed up to open a casual hangout specializing in grilled and roasted fare with a gourmet attitude.

Choi, 28, who studied at Le Cordon Bleu Sydney and racked up experience at restaurants while there, relies on both a grill and an oven to create flavorful dishes like their crackly crisp pork belly and juicy spice-rubbed chicken.

“The foundation is wood and charcoal,” Choi explained, breaking down how he alternates between a three-tiered charcoal and wood grill, which allows him to adjust how close the ingredients get to the flames, as well as a wood-fired oven to create an eclectic selection of smoky, flame-kissed fare.

Often paired with punchy sauces and draped with equally flavorful garnishes like hazelnuts, pumpkin seeds or charred green onions, Soot’s food is anything but one-dimensional.

Roasted cauliflower, simply seasoned with oil, salt and pepper, is amped up with a sauce crafted from charred chilies, garlic and bell peppers and dabs of smoked yogurt.

Grilled chicken, brined in buttermilk, is paired with a veloute sauce redolent of cumin, nutmeg and fenugreek seeds. Roasted pumpkin seeds add crunch to a dish that marries velvety, succulent and crispy textures with intense hits of salinity and spice.

Then there is Soot’s pork belly, which fuses a puffed, crackly exterior reminiscent of fried pork rinds with a silken, unctuous mouthfeel.
Choi divulged the secret to this duality of textures, “The pork belly is slow-boiled in saltwater.” He continued to explain how the crust is salted and left to rest in the refrigerator before going into the wood-fired oven.

“The crust then puffs up and becomes crackled,” Choi said.

Slices of this crackly pork belly are paired with strands of grilled green onions, roasted hazelnuts and a fermented chili and garlic sauce.

Choi also dishes out a sturdy flat iron steak with a no-frills attitude, focusing on the beef and how it is grilled.

To achieve his vision of a solid steak, Choi starts out on the lowest tier of the grill, closest to the heat, before letting the meat rest on the third tier.

The steak is then served, sliced with pureed potatoes and garlic confit, sans sauce.

Lee stocked the bar with a selection of single malt, bourbon and rye whiskeys, along with five different draft beers.

Beer and plates of piping hot food fresh from the fire are served up in the cozy 28-seat space with sturdy wood tables and terracotta accents. When the weather gets warmer, Lee and Choi revealed plans to open the terrace. 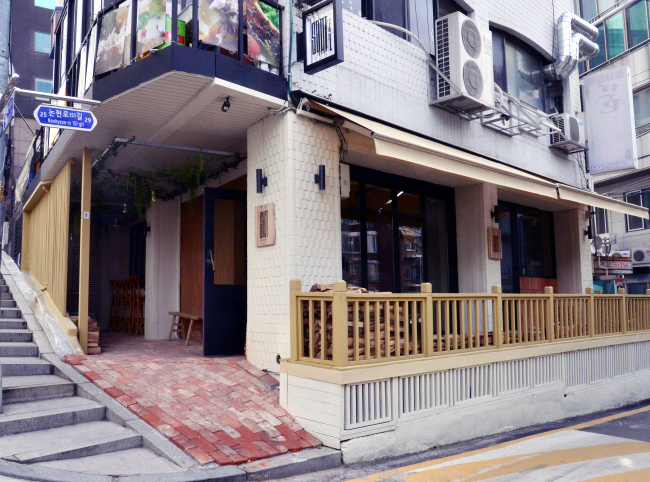