[Feature] Tycoons let their hair down, but is it more style than substance?

Employees wearing sweat shirts, sneakers and blue jeans marched into the office, with some seniors in hiking tops and pants receiving morning greetings from younger ones, awkwardly, as if they came to realize at that instant that they were a bit off from what business casual really meant.

For the first time in the carmaker’s half-a-century history, Hyundai workers were granted their choice of fashion, ditching the formal office dress code that had been blamed for making the work culture overtly hierarchical and uniformed.

It may look trivial, but for many insiders at the world’s fifth-largest carmaker, it is the biggest change at work they have ever had.

“It took quite a long time to get here, though it wasn’t, after all, a difficult choice,” Ahn Dong-wha, who works on product marketing for Genesis, said of the company’s new policy that went into effect as of March 4. “Our bosses may have lost their fashion sense as they worked in suits for many years, but I’m sure they will become the best dressers soon.”

Hyundai Motor, the nation’s second-largest conglomerate, is the latest example of how Korean conglomerates are seeking a change in corporate culture notorious for its rigid hierarchy and demands for unconditional loyalty.

Ironically, such changes top-down decisions -- made by the sons and grandchildren of chaebol founders.

Hyundai says it was Executive Vice Chairman Chung Eui-sun, the only son of Chairman Chung Mong-koo, who wanted to create a flexible and creative work environment, by easing up on the dres code. Chung himself even made a surprise video debut last month, asking junior-level workers to join hands to innovate the 51-year-old carmaker, which is struggling to find a growth engine for future.

SK Chairman Chey Tae-won is probably the busiest tycoon when it comes to changing corporate culture into a happier one.

Since early this year, the 58-year-old chairman has held a series of “talk shows” with young workers of the group’s affiliates across the country. Already nicknamed “the preacher of happiness” by the local media, Chey invites young SK members to a two-hour, open-mic show where they navigate the meaning of pursuing a happy life. He even shares how taking a walk himself, instead of taking the backseat of his limousine, or his choice of socks that day, make a fulfilling day for him.

The CEO and the largest shareholder of SK Holdings, a holding company that controls energy-to-chipmaking empire valued at 200 trillion won, has talked about the importance of being happy at work more than a decade ago. But it is the first time that he pushed himself on stage and pledged to do so for 100 times this year. He has done 30 times so far, according to the company.

Though not as public as Chey or Chung, Samsung Vice Chairman Lee Jae-yong was also spotted at a staff cafeteria of the electronics giant’s Suwon office in January.

The de facto leader of the world’s largest chip and smartphone maker and the nation’s third-richest man was seen lining up along with rank-and-file workers for a bowl of jjamppong, Chinese-style spicy noodle, which was the lunch menu that day. 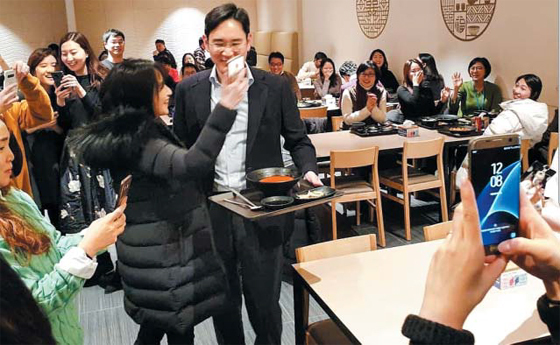 Pictures of Lotte Group Chairman Shin Dong-bin having lunch at staff cafeteria of Lotte Tower last week also became the talk of the town. While releasing his selfies with 20-something workers, his PR team later elaborated that it was not his first time there. The chairman frequently enjoys having lunch on an open area at the cafeteria, and there’s no VIP room for him, they said.

Tycoons seen mingling well with young employees is not for PR, but a self-made decision, officials stressed.

The second- and third-generations of the nation’s top conglomerates are definitely not mimicking themselves as adventurous self-made billionnaires in Silicon Valley. But they know as much as those enterpreneurs on T-shirts that bonding or communicating with their people for greater unity in corporate culture would make the difference in the future, according to some communication experts.

The influx of younger generation, particularily those born around the 90s, to the corporate world, and their presence slowly rattling the nation’s corporate culture is the point where they feel challenged and curious at the same time, they added.

Shin’s rationale of tycoons making efforts in reaching out to the young is because they are a new generation that didn’t exist before. The 20-somethings care less about corporate politics or hierarchy, often acting based on their belief systems in ways that could be seen as disobeying their bosses and risking their jobs.

“As social values change, CEOs know that keeping a pool of talented workers and moving the organization forward requires a new corporate value ... and that is ... to make them feel that they are valued and not being controlled.”

In the past, strong leadership from the above supported by their subordinates’ sacrifices were vital drivers of companies’ growth. But that is not what the nation’s new workforce desires, Shin said. There should be a stronger reason for them to stay, and that doesn’t necessarily mean money, he added.

According to SK, even if it still sounds abstract, it’s the happiness that it hopes will motivate its workers.

“The chairman believes that (SK staff) coming to work should be about pursuing happy lives, not just making money,” a SK official said. “Making a profit should not be a single reason why the company exists, but producing greater good for the society should also be the reason for the company’s existence and the key to drive the company’s future growth,” he added.

Keeping the teams motivated and creative is crucial for South Korean chaebol to survival.

“From Samsung to SK, the intelligence level of South Korean companies, in terms of their strength in marketing and efficiency, is pretty much the same. What makes corporates different nowadays is the quality of that intelligence, meaning that the healthier the organization is, the bigger synergy could be produced among its members,“ professor Shin said.

But the question is, have tycoons’ grand gestures, brought significant change beneath the surface?

Yes and no, insiders say. Although they might have opened the window for a change, the workers don’t expect to see a noticeable change immediately.

“Hierarchical corporate culture can get softer tone with this policy that now gives us a free fashion choice. But I don’t think this militant corporate culture that has dominated the work scene for a very long time would go away anytime soon,” said a Hyundai Motor worker who requested anonymity.

A worker at Samsung Electronics identified only by his surname Koo, said he would never feel comfortable having the vice chairman and executives sitting next to him during lunch.

“And I don’t believe that the work culture we have today would change just because they have lunch with us. It has to change within our office, between us and the actual bosses we are working with.”

An employee of a textile arm of a conglomerate, meanwhile, said that sometimes, authority is not always to be shunnned, and that this campaign for a horizontal work culture can be misinterpreted.

“Yes, it is good that we are more casual with each other, but when it comes to decisions being made and getting the organization going, I need an authoritative figure that can take the responsibility for the team,” the worker surnamed Suh said.

Park Ju-gun, head of CEO Score, a local corporate tracker stressed that the nation’s deeply-rooted militant work culture is not that easy to eliminate.

“Samsung tried for years to remove that hierarchy in its work system, by eradicating ranks, creating smart offices, urging employees to call them by their names not by their ranks, but it never worked,” he said.

“Tycoons, of course, want such rigid culture to go away, but it never will by spending a just few hours with workers.”

“Tycoons’ move itself is meaningful, considering that such decision was made while we are still experiencing rigid corporate culture today,” he said. “But still, they shouldn’t push for a change. That hinders efforts of creating freer and creative communication platforms within companies and disrupts the ongoing process of eradicating such (top-down hierarchy).“