[From the Scene] ‘Change has already begun’

Every March 8, celebrations and protests take place across the world with the goal of making the world a better place for women.

South Korea has celebrated International Women’s Day since the 1920s, but it was only in 1985 that the country officially began to hold events to support women’s rights.

“Today is the biggest day in the country for female activists in Korea who are striving for gender equality and women’s rights,” Baek Mi-sun, a standing representative of Korean Women’s Association United, which organized Friday’s event, told The Korea Herald.

“Through recent feminist movements here, Korean society is slowly changing into a place where women can speak out and define themselves as feminists. As their voices burst out, gender inequality issues prevailing in our society have come to the surface in terms of violence, labor and politics.

“Today, we aim to address the unsolved problems that need to change, and show our solidarity by bringing up the issues together.”

In Seoul this year, over 5,000 people took part, including the marching crowds, according to the association. It was a significant increase over last year, when some 3,000 people from across the country gathered in Seoul for the celebration. 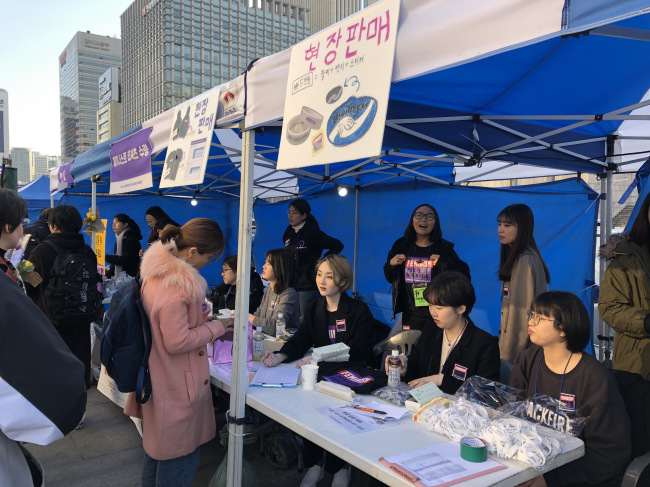 “We expected about 2,000 people would come this year, but the actual number was way more than that, as many passersby and students from feminist groups in colleges joined in,” said Lee Jae-jeong, event coordinator of the women’s group.

“We felt that Women’s Day has now grown into a big event among citizens as well, breaking the view that such events are held only for the sake of women.”

Clad in purple, the color that symbolizes the day, participants seemed to be enjoying the festive mood. The flags of feminist groups were on full display, and cheery songs made the square even more joyful.

The central theme of this year’s event was “Me Too -- we’re changing the world,” to commemorate the #MeToo movement that swept the country and revealed the enormous extent of sexual violence and sexual exploitation at workplaces, schools and many other events that affect women’s daily lives. 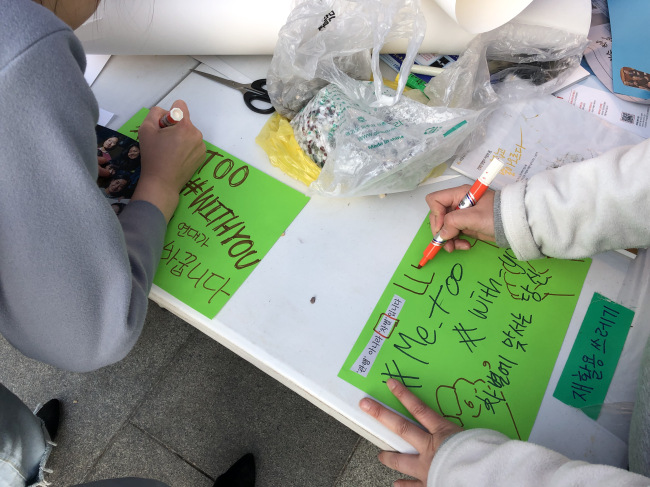 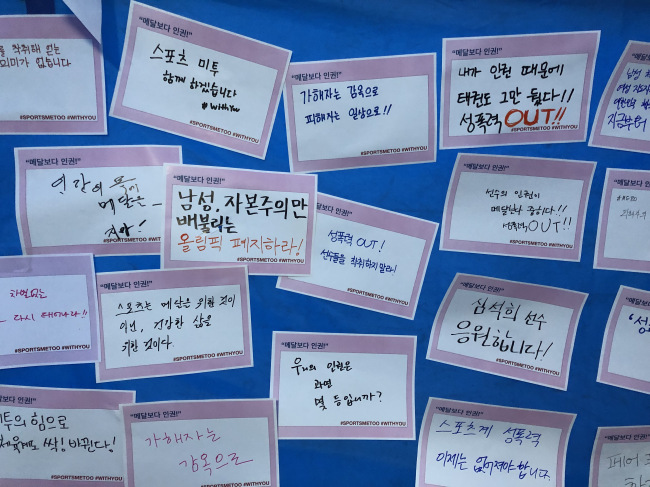 On the sidelines, some 30 activist groups set up booths to promote awareness of the need to expand women’s presence in politics, end sexual abuse in sports, embrace vegan feminism, stop young people from being exploited through sex trade, end sexual harassment in cyberspace and achieve justice for the elderly survivors of wartime sex slavery.

“I felt a bit lonely when I raised my voice online, but I felt happy and encouraged after meeting many people supporting my ideas today through the event,” Do Woo-ri, a female activist who works against sexism in Korea's dating culture, told The Korea Herald. 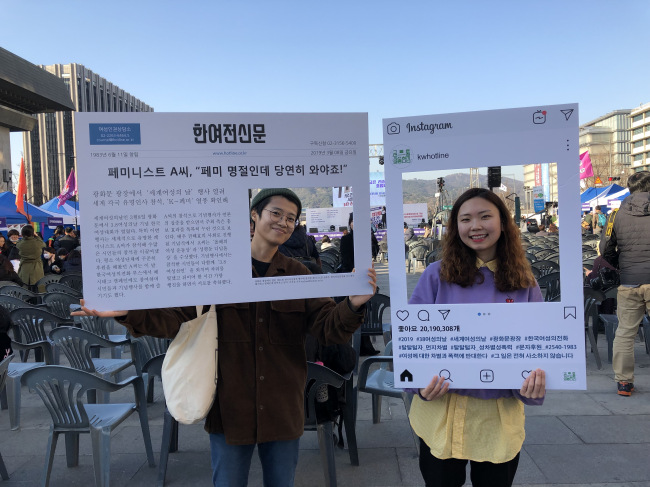 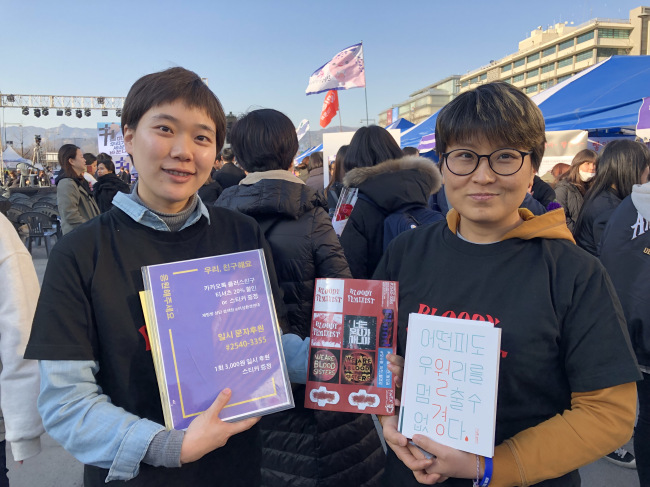 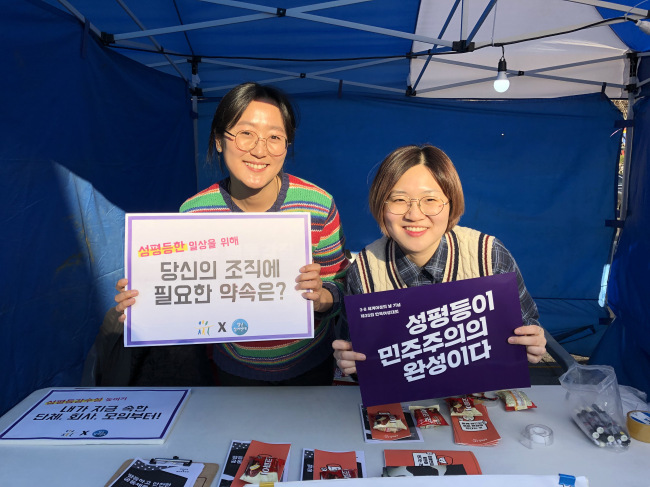 Living as a feminist in Korea

Although the square was open to everyone, the majority of participants seemed to be women in their 20s and 30s.

According to a recent survey conducted by the Korean Women’s Development Institute in July 2018, about half of the 1,004 female respondents said they consider themselves feminists.

Many at the march said they felt that society’s attitude toward feminism had been slowly changing, as movements are taking place across the country to promote gender equality and fight sexual violence.

“When I entered university two years ago, many of my friends often asked me ‘Why are you so sensitive about everything?’ But now, more and more people are saying, ‘What you said was right,’ and support my ideas,” said Ji-hyung, a college student at the event.

“Three or four years ago when I started studying feminism, many people didn’t even recognize the importance of that area of study. However, over time, many friends are listening attentively to my opinions and send support when I talk about the difficulties of living as a woman in Korea,” Pyo Jeong, another participant in her 20s, said.

Like Ji-hyung and Pyo, many people at the event said they are hopeful about the prospects of social changes, as more people have become sensitized to the issues that feminists raise.

“I think the recent #MeToo movement brought many changes in our society -- besides that more victims can now cope with their nightmares rather than hiding it, more people are now censoring their words and behavior whether it is harassment of others,” activist Do said.

Despite the changes, some participants said they felt the feminist movement in Korea is just getting started and there is still a long way to go to achieve gender equality.

“The movement created an atmosphere where people can raise questions on unfair things that were not even considered as problems in the past. However, when I think, ‘Is Korea now a safe and equal place for women to live in?’ my answer is ‘not yet,’” Kim Ik-joon, a male feminist in his 20s, told The Korea Herald.

Participants also said harsh “backlash” from haters who oppose the feminist movement is a factor in hindering the progress of feminism here.

“The new atmosphere enabled feminists to come up with claims more openly and confidently compared to the past. More feminist clubs are being created in colleges, and the number of supporters has significantly increased nowadays.

“However, as more feminists raise their voices and unite, haters tend to express their hostility against the movement more directly and publicly,” Lee Jae-jeong of the group that organized the march said.

Lee, who is currently writing a book about feminism on campuses, said many student feminists suffer from various kinds of threats and verbal attacks from “the haters.” Hatred toward feminism is especially prominent on cyberspace, Lee said.

“When activists organized events at their schools to promote feminism, some even write on online communities that they would beat them with their shoes until the female students become ‘awakened.’ The haters sometimes reveal the personal information of the activists online. The most important thing is that such hatred content still gets tremendous support and ‘likes’ in cyberspace.”

“Women are asking for a simple thing -- the right to live as a human being in the world without experiencing discrimination and fearing threats. That’s all. We are not trying to harm others or deprive them of their rights, but it’s frustrating seeing people take the movement’s message in distorted ways,” Ahn Soo-hyeon, a feminist in her late 30s, said.

Besides the backlash, young feminists said they often face difficulties trying to convince other people to consider their perspectives.

“I’ve met so many people, especially old people, saying, ‘You don’t understand the ways of the world yet,’ or ‘You’ve only seen the world through Twitter. … Whenever I hear them saying ‘that’s just how it is, so you should accept it,’ I feel resentful,” Michelle, a feminist in her early 20s, said.

“Since I started to call myself a feminist, many of my male friends whined, saying they experience gender inequality too so I should stop complaining,” Ji-hyung said.

“Men often complain that they feel discriminated as they work harder than women, pay for the dates and such things, but women are talking about life-threatening experiences they are exposed to daily.

People should listen to what women are trying to say through the movement, rather than only focusing on how feminists express the message, Baek added.

During the ceremony, Lee Hyo-rin from Korea Cyber Sexual Violence Response Center made an inspirational speech, receiving a round of applause.

“We will think harder, speak louder and act without fear to make the new commonsense that we imagine will become natural in our society. The change has already begun.”