By Park Ju-young
Published : Feb 28, 2019 - 16:57       Updated : Feb 28, 2019 - 17:31
The March 1 Movement was a massive protest joined by hundreds of thousands of people shouting “manse!” nationwide on the streets, but the protests are often remembered as the achievements of few independence activist men who played vital roles in the event.

Women were relegated to the sidelines while history was written centering on these men’s stories, and the women independence fighters were often referred to as someone’s mother or wife, instead of by their names. 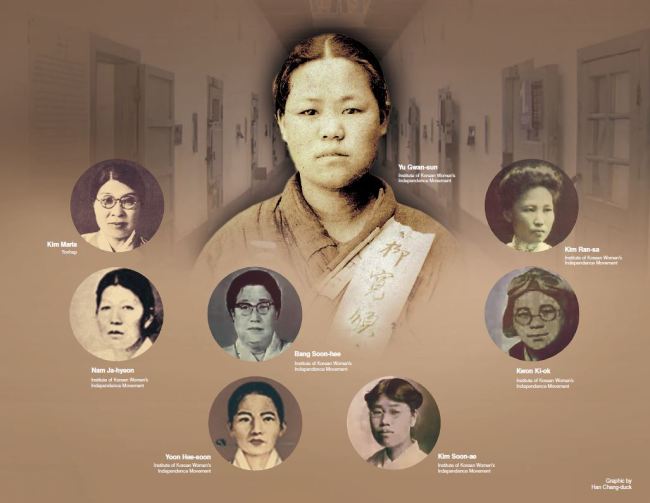 Some 100 years later, Korea has been shining new light on the stories of female independence activists who fiercely fought for the country’s freedom against Japanese colonial rule.

In a speech marking the 99th anniversary of the March 1 Movement last year, President Moon Jae-in highlighted the activities of the “founding mothers who devoted themselves to the establishment of the Republic of Korea,” by briefly mentioning their contributions to Korea’s independence movement.

Behind the Moon administration’s efforts to discover and recognize women independence activists’ contributions, the Ministry of Patriots and Veterans Affairs decided to confer decoration to 75 women activists this year. It marks the largest number since 1990, when 81 women were awarded medals.

Also, the government decided to confer the Republic of Korea Medal -- the highest grade of national decoration -- to independence fighter Yu Gwan-sun on Tuesday, amid mounting public sentiment calling to elevate her medal status from the third-grade Independence Medal to the first.

“As history has focused on male independence fighter’s stories in the patriarchal Korean society, the efforts of countless female independence activists have not been discovered yet,” Sim Ok-joo, chief of Institute of Korean Women’s Independence Movement, told The Korea Herald.

Sim, who has been working on uncovering unsung female independence activists over the last decade, stressed the importance of recognizing the role of women in Korea’s independence movements, even if they did not take part in armed protests with guns and knives.

“Women were everywhere when the independence movements took place nationwide. Some of them taught young children at schools, while others supported fighters by preparing meals and clothes. However, it’s tough to track down their contributions at this belated time, since most historical records have already disappeared and many of the related figures have died,” Sim said.

Despite the difficulties, Sim has welcomed growing public interest in women’s participation in the independence movement.

The movie released in 2015 features a woman sharpshooter leading the assassination plot of a high-ranking Japanese officer. The character is based on the true story of independence activist Nam Ja-hyeon.

“People may have thought that women played passive roles during the protests, but the movie broke that fixed idea by portraying the female shooter’s story. The movie triggered people to pay attention to female independence activists, and interest has been growing ever since,” Sim said.

The exhibition “I Married Korea’s Independence” is one of the cultural events that aim to spread the stories of unsung women fighters in Korea’s independence movement. The exhibition chronicles the lives of six independence fighters: Yu Gwan-sun, Kim Maria, Yoon Hee-soon, Kim Ran-sa, Nam Ja-hyeon and Kwon Ki-ok.

“In addition to the famous activist Yu, the exhibition selected five additional female independence fighters who protested Japanese colonial rule in various ways, but were forgotten by the generations that followed,” Hwang Dong-jin, chief of the Seoul Education Museum and who curated the exhibition, told The Korea Herald.

Half of the exhibition space is dedicated to the story of Kim Maria, the independence fighter who organized a women’s independence activism group and led the March 1 movement by secretly bringing the Feb. 8 independence declaration from Japan to Korea.

The title of the exhibition comes from Kim’s own famous words: “I married Korea’s independence.” The statement expressed her determination to bring freedom to the country, even at the sacrifice of her personal life.

The exhibition also introduces the achievements of the first chief of an all-women militia Yoon Hee-soon, the first Korean female aviator Kwon Ki-ok who tried to bomb the Japanese Government General of Korea, educator Kim Ran-sa who inspired many young female independence activists, including Yu, by teaching them the terrible realities the country faced and activist Nam Ja-hyeon, who was arrested after trying to assassinate Japanese military commander Nobuyoshi Muto.

“There are many other female activists who fought for Korea’s independence whose stories are often overlooked or have never been told yet,” the curator said.

“While public attention on the March 1 movement has never been greater as it marks the 100th year in 2019, we hope more and more people get to know about the female heroes and their achievements through the exhibition.”

The exhibition runs until Nov. 31 at Seoul Education Museum.