Tottenham Hotspur's South Korean forward Son Heung-min has extended his scoring streak to three matches in the English Premier League since returning from his international duty.

Son sealed Tottenham's 3-1 win over Leicester City at Wembley Stadium in London on Sunday (local time) with his goal in the second-half extra time. It was his 11th goal in the league this season. The 26-year-old also has four goals from domestic cup competitions.

With his latest performance, Son has extended his scoring run in the EPL following his return from the Asian Football Confederation Asian Cup in the United Arab Emirates, where South Korea suffered a quarterfinal exit last month. Son played three matches at the Asian Cup but failed to bag a goal. 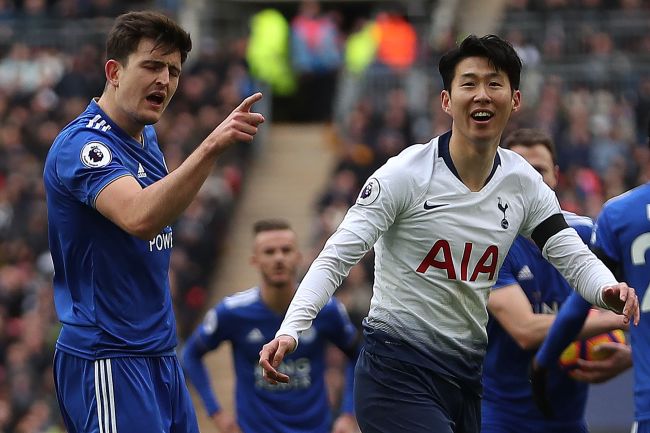 But since returning from the Asian Cup, Son has started to show his scoring instinct.

In his first Premier League match after the Asian Cup, Son scored a crucial goal in Tottenham's 2-1 win over Watford on Jan.

With Tottenham's main striker Harry Kane and key attacking midfielder Dele Alli sidelined with injuries, Son has been given an important role to lead the London club's offense.

Against Leicester, Son started as a left winger behind Spanish striker Fernando Llorente. In the 15th minute, Son was brought down by Leicester center back Harry Maguire but was booked for diving.

It was his second yellow card in the Premier League this season.

With Tottenham leading 2-1 in the second half, Leicester pushed forward to get an equalizer, but Son quashed the visitors' rally with his superb individual effort.

A clearance by Moussa Sissoko from Leicester's corner kick found Son, who outpaced defenders and ran half the length of the pitch before finishing neatly with his left foot against goalkeeper Kasper Schmeichel.

"I was confident because I was one-on-one," Son was quoted as saying to Sky Sports. "The keeper was very big, but I was confident to score with my left foot."

"After 2-1, we struggled a little bit," he said. "I think the moment was very important to get one more goal."

Asked about his yellow card situation, Son said he should have been awarded a penalty.

"My feeling, it was a penalty. He (Maguire) touched me, and he was a little bit late," Son told Sky Sports. "I was very, very disappointed, and I was surprised. But a referee decision is part of football. We have to accept it."

Son will now try to extend his red-hot form to the UEFA Champions League, where Tottenham take on Borussia Dortmund of Germany in the first leg of the round of 16 match at home on Wednesday.

Son has not scored a goal in the UEFA Champions League this season. He has played in six group stage matches but only bagged one assist. (Yonhap)