By Bae Hyunjung
Published : Oct 17, 2018 - 17:42       Updated : Oct 17, 2018 - 17:42
South Korea’s global competitiveness has made some progress this year on the back of its strong macroeconomic fundamentals and ICT, but continues to face challenges concerning market autonomy, corporate hierarchy, diversity and innovation, a global report showed Wednesday.

According to the Global Competitiveness Report, released by the World Economic Forum, Asia’s fourth-largest economy ranked 15th out of 140 countries, marking its third-strongest showing ever and its best since 2008, when it ranked 13th. Korea peaked at No. 11 in 2007.

In simple numerical terms, Korea climbed 11 notches from a year earlier but this on-year leap is largely attributable to changes to the WEF’s evaluation criteria.

Seeking to better reflect transitions in economic environments amid the impact of the “fourth industrial revolution,” the WEF did away with outdated indicators such as the tuberculosis rate and added new ones such as market capitalization, the patent application rate and the number of internet subscribers. Under this renewed system, Korea’s ranking for last year would have been No. 17 instead of No. 26. 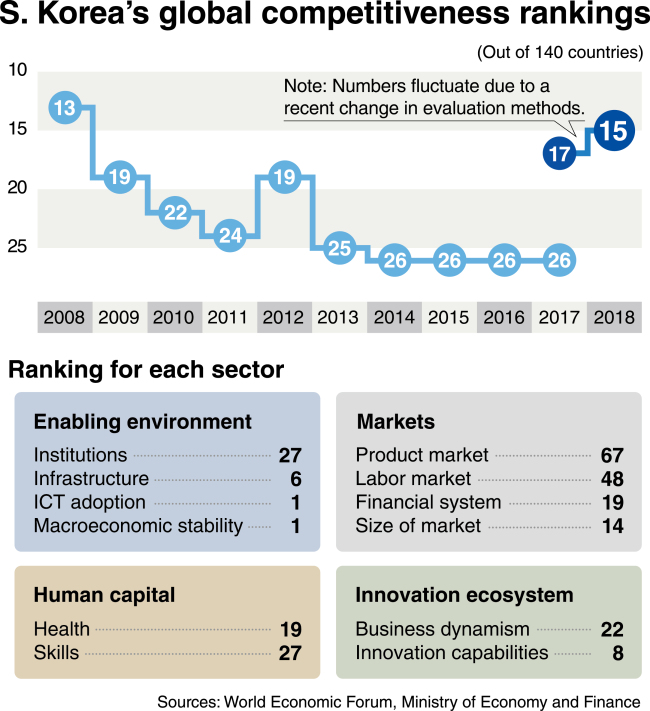 Seoul’s most notable achievements were in the areas of ICT adoption and macroeconomic stability, where it maintained the No. 1 position. The country was also evaluated as the sixth most competitive in terms of infrastructure.

Its weaknesses were its product market and its labor market, which respectively ranked 67th and 48th in the world, the report showed. The most serious problems in these areas included market monopolies, labor relations and workers’ rights.

Even in more competitive categories, however, Korea was hindered by lower scores in innovative thinking, market autonomy and human diversity.

For instance, Korea scored in the mid- to high range on skills, ranking 27th overall, but drew below-average scores in particular subcategories of skills. For example, in terms of teaching critical thinking, Korea stood at No. 90.

In terms of innovation capabilities, despite ranking No. 2 in R&D expenditures and No. 3 in patent applications, Korea was held back by its No. 82 ranking in the diversity of its workforce. The country’s reluctance to diversify its labor force also affected its ranking for ease of hiring foreign labor, which stood at 104 and affected its overall showing in the labor market category.

“A reason that Korea and Japan lag slightly behind their high-income peers on key innovator drivers, such as entrepreneurial culture and diversity, could be a tendency toward uncertainty avoidance,” the WEF report stated.

Despite some recent increases, Korea has shown a significantly lower appetite for entrepreneurial risk than the United States and this could be making it more difficult for its public to embrace disruptive ideas, the report said.

“Our task is to achieve inclusive growth, which includes both income-led growth and innovative growth,” said the Ministry of Economy and Finance in a press release.

The government is set to hold a public-private joint policy meeting on national competitiveness next month, in which it is to come up with improvement plans for underperforming criteria, according to officials.