The candid interactions between South Korea’s presidential couple of Moon Jae-in and Kim Jung-sook are endearing in every way, and what their impact would be on their North Korean counterparts Kim Jong-un and Ri Sol-ju one could only surmise.

Moon and his wife don’t put on a stuffy show for the camera. Their open dialogue invites the general public to see them more as the friendly neighborhood couple than distant rulers of the nation. 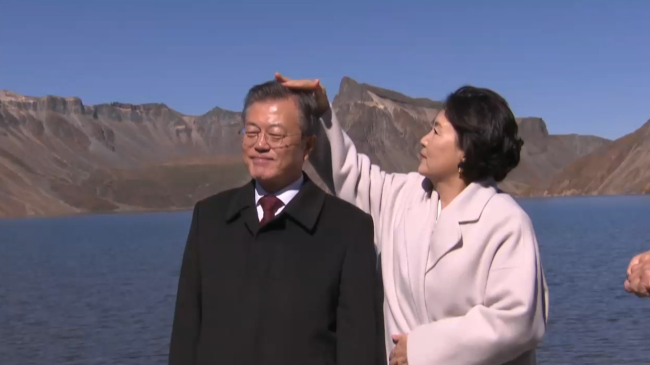 "Here, let me tidy up your hair" (Pyeongyang Press Corps.)

1. Presidential public display of affection? Moon Jae-in and Kim Jung-sook posed in front of the famous Chonji crater lake, or Heaven Lake, on top of Paektusan to have a souvenir photo taken. Seeing Moon’s hair flying about in the air, Kim carefully flattened it for him. She just wants her husband to get the best shot! 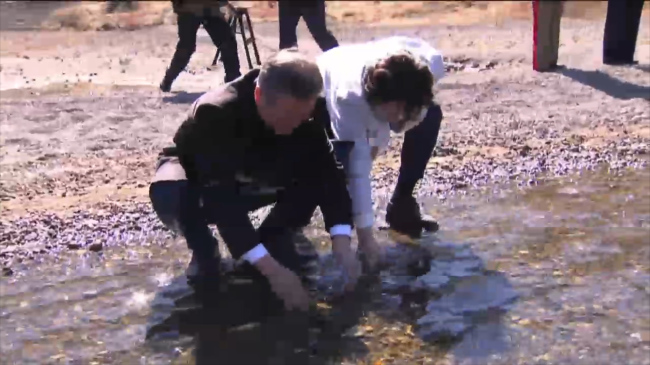 "That's not the way to do it!" (Pyeongyang Press Corps.)

2. First lady Kim Jung-sook had brought a bottle containing water from Jeju Island’s Hallasan, the tallest mountain in South Korea. Hallasan also has a crater lake called Baekrokdam. Kim intended to pour half of the bottle in to Chonji and refill, mixing water from the two Koreas. President Moon Jae-in crouched down to scoop up Chonji water for Kim’s bottle, but as he fumbled, Kim rushed to his side to show him how it should be done, reprimanding him a little as she got to it. 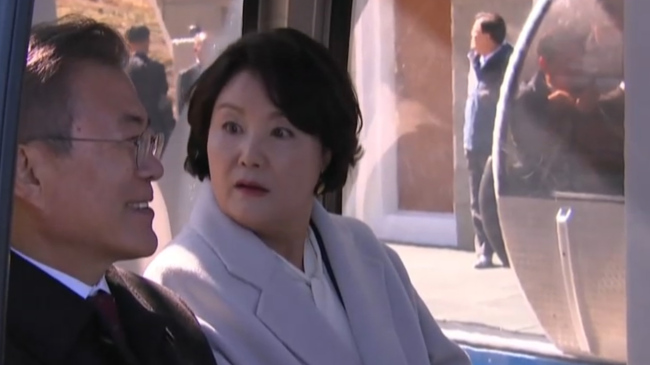 "You did what?" (Pyeongyang Press Corps.)

3. Settled in the cable car to take them down from the Paektusan peak, Kim Jong-un, a bit out of breath, asked Moon if he wasn’t tired after all the walking. Moon replied that he still felt good. As the two couples broke into laughter, amusing over Moon’s health, first lady Kim worriedly shared how Moon had been ill from working too hard. A doctor had told Moon he must exercise more even when he is busy. As Moon thinks going to hiking once a month is enough exercise, Kim said she tries to get Moon away from work for his weekly exercise. Moon confessed he hadn’t been working out for the past two weeks and his wife threw him surprised dagger eyes.