By Joel Lee
Published : Sept 17, 2018 - 16:37       Updated : Sept 17, 2018 - 17:23
With France’s largest container harbor, a picturesque beach promenade, world-class amenities and bucolic scenery that formed the backdrops of impressionist paintings, Le Havre has all the ingredients for a hedonistic seaside life.

The city is located on the bank of the Seine Estuary in the Normandy region of northwestern France. In recent years, it has been an apposite recipient of decentralization from Paris, a move intended to strengthen the city’s global competitiveness and its democratic governance.

Le Havre, meaning “The Harbor,” is ripe for investment in shipping and logistics, among other sectors, said Mayor Luc Lemonnier in an exclusive interview with The Korea Herald last week.

“The bulk of our economic activities, comprising about one-third of all employment, occurs around our port, which is the biggest in France and fifth in Europe pertaining to large container carriers. So businesses and investments related to the port are very important to us,” Lemonnier said.

Lemonnier came on his first official visit to Korea with a delegation of businesspeople, tourism professionals and educators. He met with Incheon Mayor Park Nam-choon and other officials and visited the Seoul Startup Hub.

“Not only shipping and logistics, particularly with large-size containers, we are also putting efforts to develop our cruise industry,” according to the mayor. “Le Havre’s port was developed before the city and the two have intimate relationships. Therefore, urban planning is another major concern of our city administration. We have devised and implemented various policies and schemes to utilize the port in everyday lives of our citizens and tourism industry.”

The port of Le Havre is the second-largest seaport in France in terms of trade volume, behind that of Marseille, and 50th largest in the world. Its major industries are shipping and logistics, petrochemicals, oil and gas, aeronautics, wind turbine production and thermal power. Major services include shipping and logistics, maritime insurance, digital innovation, design, tourism and education.

In 2005, Le Havre’s central city was recognized as a UNESCO World Heritage Site. The Andre Malraux Modern Art Museum has the second-largest number of impressionist paintings in France.

“The interest and commercial collaboration between Normandy and Korea have grown substantially over the years, boosted by the visit of Herve Morin, president of the Normandy region, to Korea in October last year,” the ambassador said. “We are striving to enhance partnerships between French and Korean ports, including those of Incheon and Busan.” 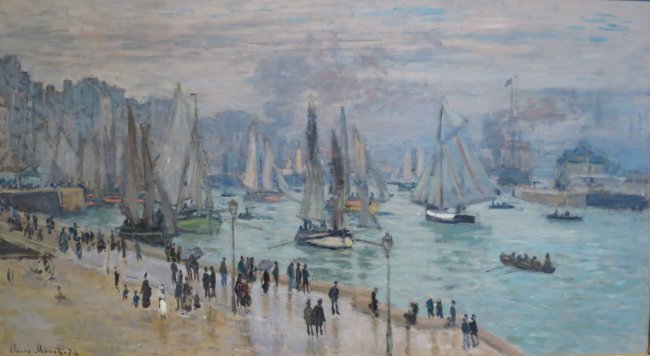 "Le Havre, Bateaux de Peche Sortant du Port" by Claude Monet, 1874
According to the French Embassy in Seoul, Le Havre and Incheon formed a partnership in 1977. This opened the way for the increased flow of maritime transport and for more official exchanges between the two cities. Le Havre played an instrumental role in helping design Incheon’s cruise terminal, and Incheon officials visited the French city to study its sustainable business practices.

In education, many schools in Le Havre -- including the University of Le Havre, with its Ecole de Management de Normandie and Grande Ecole Sciences Po, and Ecole Superieure d’Art et Design Le Havre-Rouen, as well as secondary and vocational schools Lycee Saint-Joseph and Lycee Le Cesne -- have maintained numerous agreements and exchange programs with Korean partners for more than 30 years.

The mayor and ambassador highlighted France’s decentralization efforts since 1982 with the enactment of the Gaston Defferre Laws, which devolved various powers to local governments comprising regions, departments and communes. Prior to 1982, French municipalities and departments enjoyed limited autonomy under laws passed in the late 19th century.

“Significant progress has been made in decentralization over the years,” Lemonnier said, adding that much of their economic development is carried out autonomously and also in cooperation with the central government. “Decentralization has occurred not only in the economy, but also social, educational and international affairs.”

As a result of their new powers, many cities and regions are turning their eyes abroad for partnerships, Lemonnier stressed, pointing to the economically dynamic Asia, historically intertwined Africa and resource-rich Middle East.

Responding to this reporter’s observation that decentralization is generally difficult and has proven challenging in Korea, Lemonnier said, “Personally, I think that to succeed in decentralization it takes a lot of time and patience. But for France, already over 35 years have passed and we have seen tangible improvements in this regard. Since Korea started later than France in decentralization, you will come to realize its importance and benefits in time.”

Korea started implementing true local self-governance in 1995 and has seen a number of pros and cons, largely due to the entrenched legacy of centralized governance going back centuries.

“You need professional expertise to succeed in decentralization. The relationship between local and central governments is important and it has to be a complementary one,” said Penone. “The key is to start devolving powers in fields of competitive advantage and expertise, while leaving policy authorities to the central government for larger territorial matters. Issues more direct to citizens are better dealt with on the local level.”

The envoy said vitalizing local regions is critical for both France and Korea, as both nations were largely centralized historically. “I receive a lot of questions about France’s decentralization experience when I meet Korean mayors and politicians,” Penone said.

On the issue of popular support for the European Union, as France has recently been riven by a populist backlash against the European project, Lemonnier said, “What I can tell you is that I try to convey a message that Le Havre is better off by being open than closed, outward-looking than inward-oriented. Le Havre, as much as France, needs globalization.”

The mayor explained that Le Havre first spawned as an open port in 1517 with the specific purpose of “discovering the New World.”

“Over 85 percent of Le Havre was destroyed during the Second World War, but the city was reconstructed with EU’s succor and funding. The EU also architected the city’s social policies,” he said. “Populist politicians tend to blame the EU for problems created within their nations. The EU, despite its foibles, is very much embedded in Le Havre people’s lives. I also think that France without EU is existentially meaningless.”