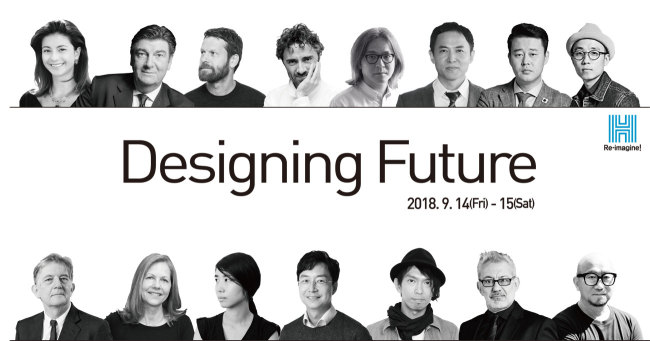 The forum will invite internationally recognized designers, architects and CEOs to discuss how design can help us picture a better future.

Dana Firas, princess of Jordan and president of the Petra National Trust, and Peter Red Dot founder and CEO are among forum’s 15 speakers. 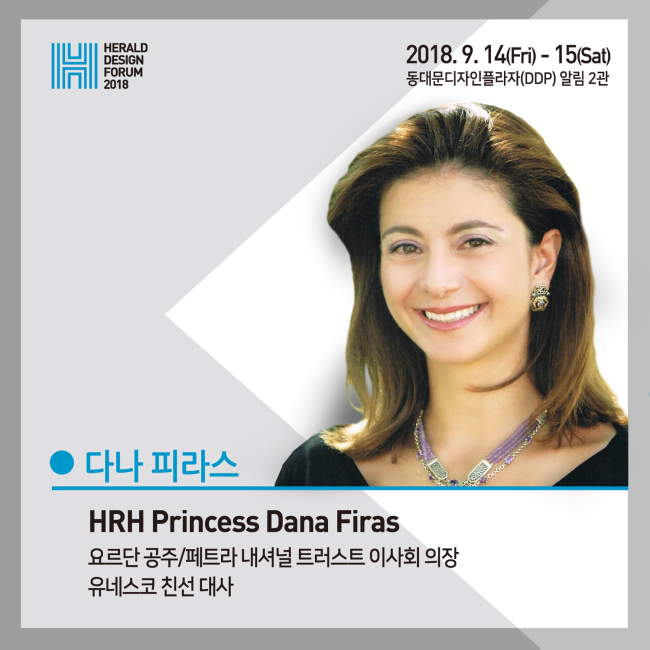 Princess Dana Firas
Princess Dana Firas is the wife of Prince Firas bin Raad. She is currently president of the Petra National Trust, a Jordanian nongovernmental and not-for-profit organization dedicated to the preservation, protection and conservation of the UNESCO World Heritage site of Petra.

In 2017, Princess Dana was designated as a UNESCO goodwill ambassador in recognition of her outstanding commitment to the protection and preservation of heritage for sustainable development.

Princess Dana has won the Arab Heritage Person Award for 2018 as well. She is the first woman and first Jordanian to be selected.

Princess Dana holds a bachelor of arts in economics and international relations from Boston University, a master of science in development studies from the London School of Economics and Political Science and a master of public administration from Harvard University’s Kennedy School of Government focused on sustainable development and environmental policy, where she was a Fulbright Scholar. 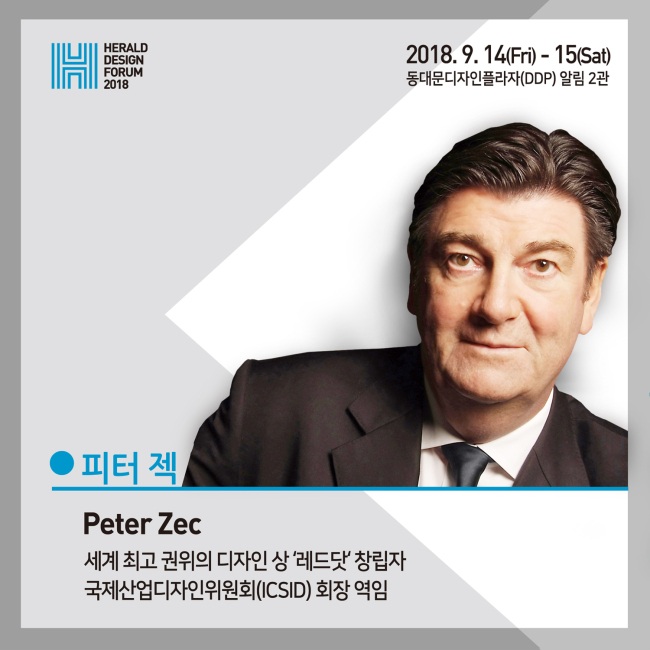 Peter Zec
Peter Zec is the founder and CEO of Red Dot.

In 1991, he took over at the helm of Design Zentrum Nordrhein Westfalen in Essen, Germany, which has hosted a design competition since 1955. Zec further developed what had until then been a national competition, transforming it into an international platform for the evaluation of design. He established its global gearing and expanded the Red Dot brand.

In 2006, German business magazine Wirtschaftswoche selected him as one of the “20 creative lateral thinkers who changed the face of their companies or created entirely new markets,” while Marketing Club Ruhr awarded him the title of “Head of the Year” in 2016. In the same year, he was awarded honorary citizenship of the city of Seoul for his work on behalf of the South Korean capital.

Before joining Design Zentrum, Zec was head of the visual department at the ZKM Center for Art and Media in Karlsruhe, worked as managing director of Bund Deutscher Grafik-Designer and the Association of German Industrial Designers. In 1993 he accepted a professorship in business communication management at the HTW Berlin - University of Applied Sciences, where he taught for 17 years.

After more than 25 years as the head of Design Zentrum Nordrhein Westfalen, Zec is more actively integrated than ever in the world of design -- as managing partner, author and editor as well as the host of the Red Dot Gala. In addition, he is a sought-after adviser and speaker on all of the world’s continents -- one who consistently emphasizes, recognizes and respects the value of good design. 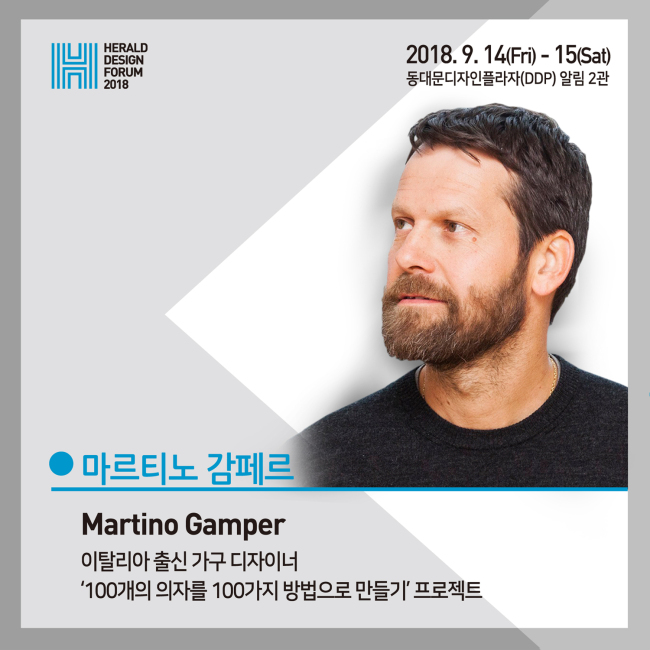 Martino Gamper
Martino Gamper is a London-based Italian designer. Starting as an apprentice with a furniture maker in Merano in northern Italy, Gamper went on to study sculpture under Michelangelo Pistoletto at the Academy of Fine Arts, Vienna. He completed a masters in 2000 from the Royal College of Art, London, where he studied under Ron Arad.

Working across design and art venues, Gamper engages in a variety of projects from exhibition design, interior design, one-off commissions and the design of mass-produced products for the cutting edge of the international furniture industry.

Gamper started to build his reputation through his solo exhibition “Confronting the Chair,” at the Design Museum in London and gained international recognition through his landmark show “100 Chairs in 100 Days” in 2007, where he reconfigured 100 abandoned chairs he had rescued over a two-year period.

Gamper was the recipient of the Moroso Award for Contemporary Art in 2011 and the Brit Insurance Designs of the Year, Furniture Award in 2008 for his project “100 Chairs in 100 Days.” 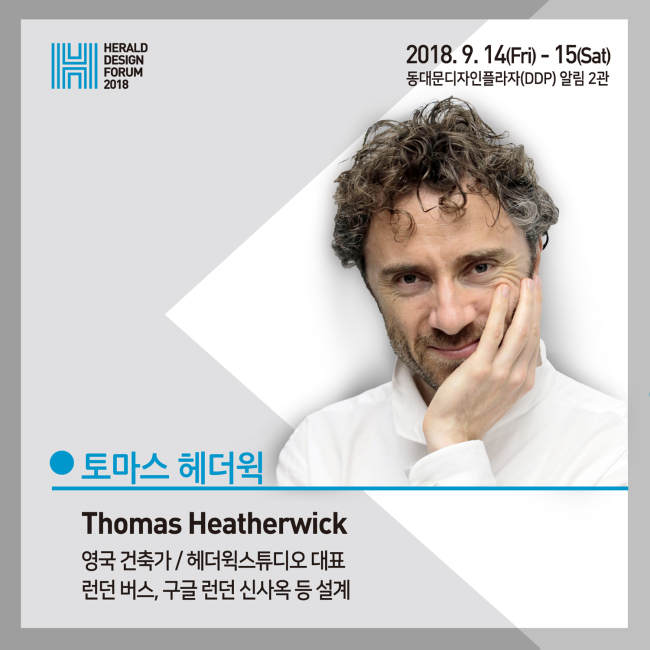 Defying the conventional classification of design disciplines, Thomas founded Heatherwick Studio in 1994 to bring the practices of design, architecture and urban planning together in a single workspace.

Thomas leads the design of all Heatherwick Studio projects, working in collaboration with a team of 180 highly skilled architects, designers and makers. Thomas’ unusual approach applies artistic thinking to the needs of each project, resulting in some of the most acclaimed designs of our time. Based in London, Heatherwick Studio is currently working on four continents on projects valued at over 2 billion pounds ($2.56 billion). Following the Gold Award success of the UK Pavilion for the Shanghai World Expo in 2010, Heatherwick Studio has gone on to win design briefs including for the Google campus in Silicon Valley, Coal Drops Yard in Kings Cross, London and an overhaul of London Olympia.

The studio has recently completed the 420,000-square-meter Bund Finance Centre in Shanghai, a collaboration with Foster + Partners, and the Zeitz Museum of Contemporary African Art in Cape Town, the first museum of its kind on the continent.

Thomas has been appointed as a Commander of the Order of the British Empire, a Royal Academician and in 2004 became the youngest Royal Designer for Industry. 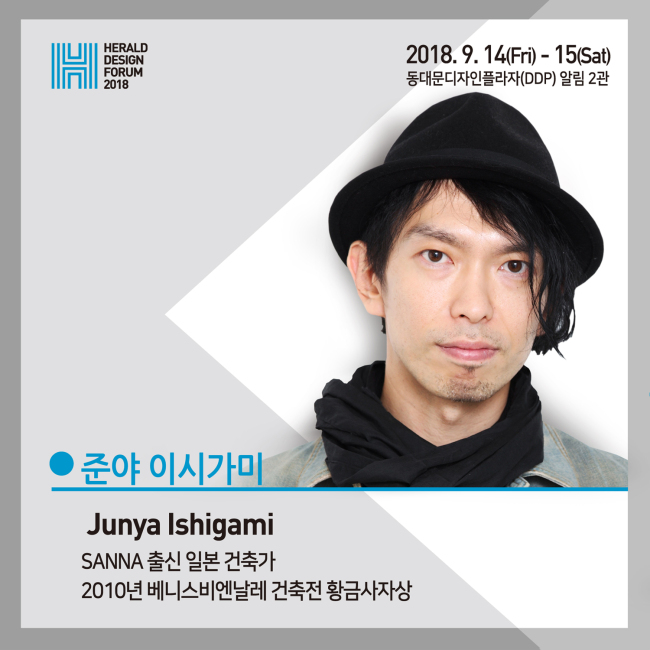 Ishigami worked with Pritzker Architecture Prize winner Kazuyo Sejima between 2000 and 2004 before starting his own architecture firm, junya.ishigami+associates, in 2004. 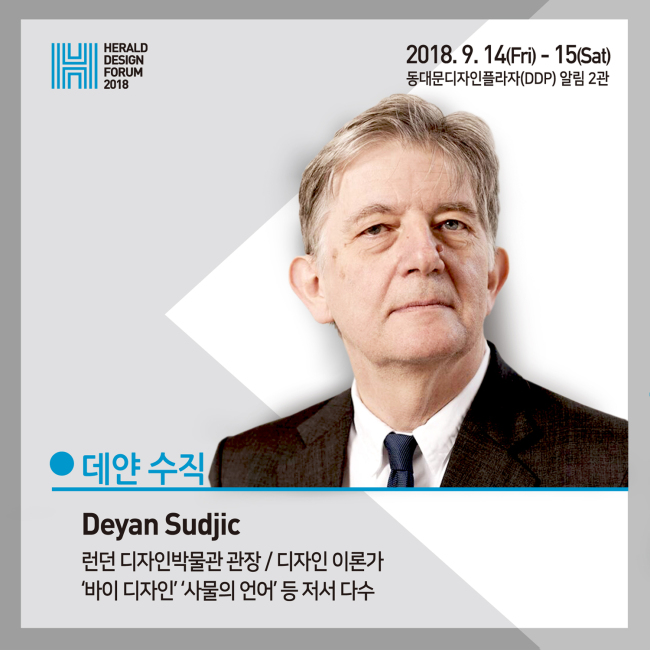 Deyan Sudjic
Having become director of the Design Museum in London in 2006, Deyan Sudjic’s career spans many different areas, including journalism, education and writing.

Sudjic was director of Glasgow UK City of Architecture in 1999 and curator of the Venice Architecture Biennale in 2002. 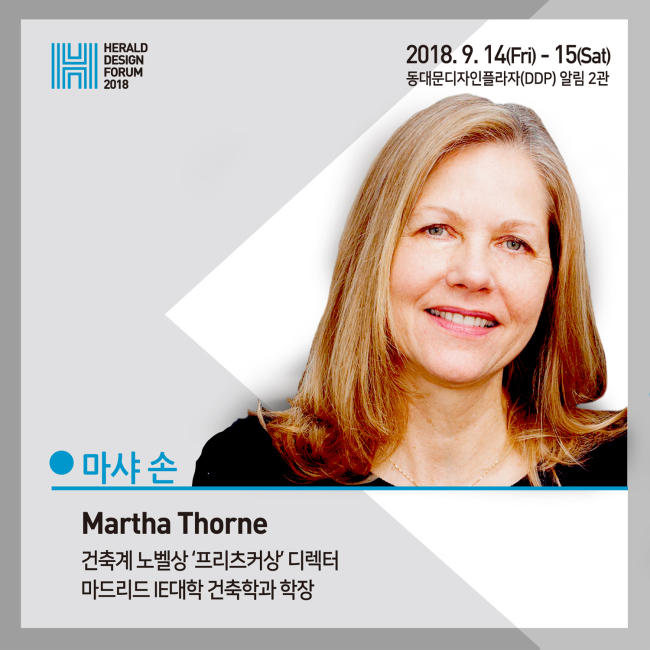 Prior to her current role, she worked as a curator at the department of architecture at the Art Institute of Chicago. In her curatorial position, she undertook research, exhibition production and collection development, as well as editing books and writing numerous articles for architectural journals and encyclopedias.

She has been a member of the jury for the international prizes ArcVision-Women and Architecture Award and on the board of the International Archive of Women in Architecture, as well as other initiatives to support women in contemporary architecture.
Thorne holds a master of city planning from the University of Pennsylvania and a bachelor of arts degree in urban affairs from the State University of New York at Buffalo. She undertook additional studies at the London School of Economics. 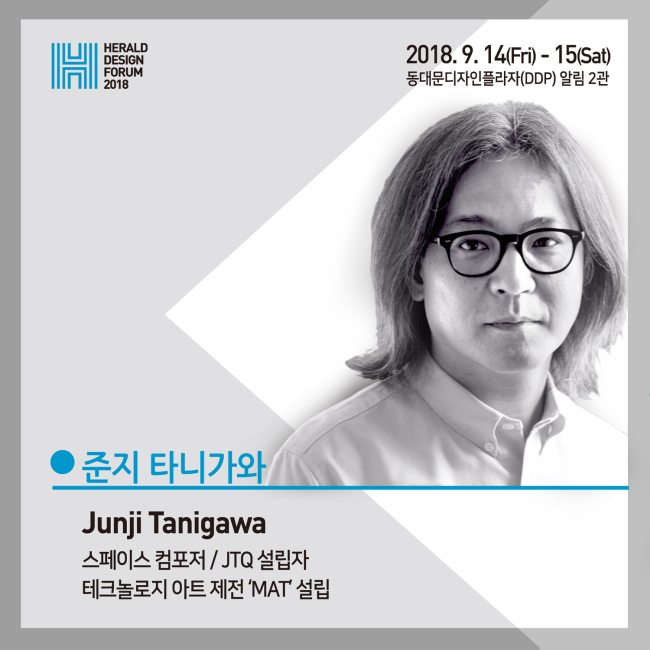 Junji Tanigawa
Tanigawa, born in 1965, is a Japanese artist, product and spatial designer.

Tanigawa is CEO at JTQ, a space creation consulting firm he founded in 2002 that is dedicated to “deliver messages through the medium of space.”

He advocates his own spatial development method, “Space Compose,” and his experience design combining environment and situation, gaining much attention from various fields.

His major works include the Japan Media Arts Festival from 2005-08, Kansei Exhibition at the Louvre’s Museum of Decorative Arts in 2009, Yakushiji Hikari Emaki to commemorate the 1300th anniversary of Heijyokyo in 2010.

Tanigawa has been selected for the D&AD Awards, as well as winning numerous DSA (formerly DDA) Awards for his outstanding contributions to spatial design. 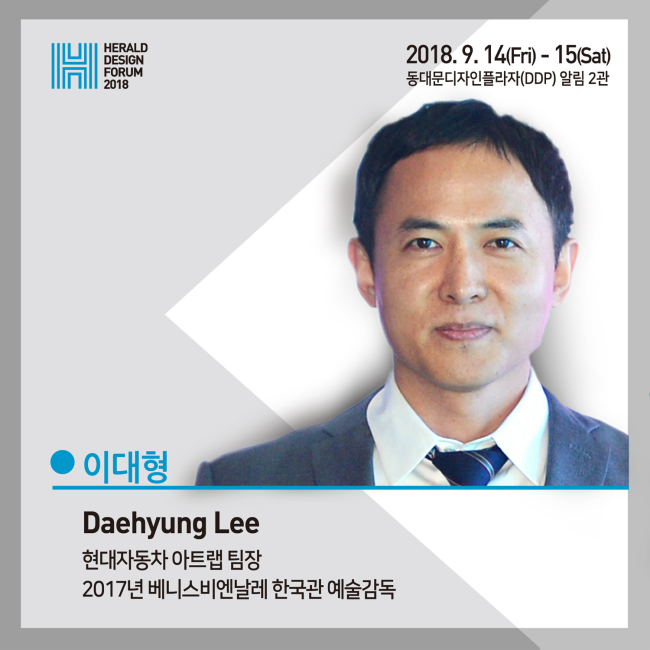 Having started his career at Art Lab in 2013, Lee has managed numerous notable projects including the “MMCA Hyundai Motor Series,” “Hyundai Commission” at Tate Modern, “The Hyundai Project” at Angeles County Museum of Art, Bloomberg “Brilliant Ideas” and the “Hyundai Meets Art” project. In 2017, Lee was appointed as curator of the Korean Pavilion for the 2017 Venice Biennale.

He majored in art history at Hongik University in Seoul and holds a master’s degree in curatorial studies from Columbia University in New York. 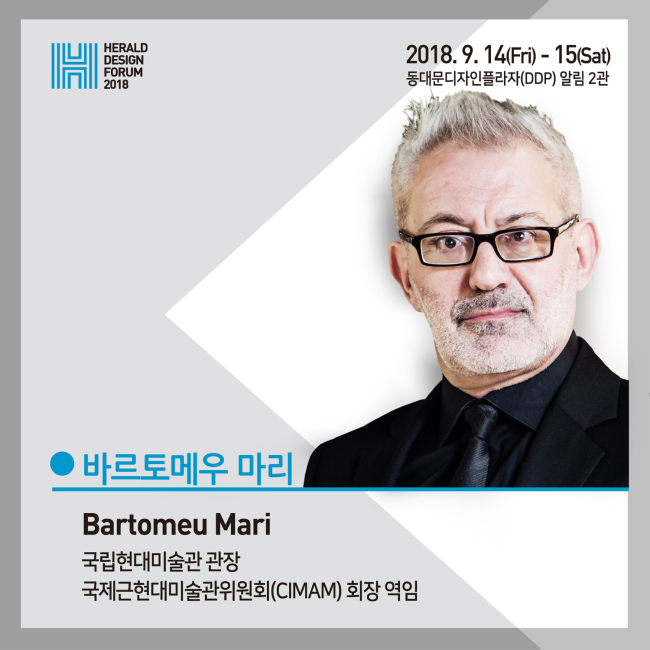 Bartomeu Mari
Bartomeu Mari is an internationally renowned author and curator. He is currently director of the National Museum of Modern and Contemporary Art in Korea.

Since his inauguration in 2015, the first-ever foreign director of MMCA has been putting in efforts to reinvent the museum system, as well as to offer quality programs to local audiences here.

Previously, Mari served as director of the Museum of Contemporary Art of Barcelona, from 2008-15. He was the chief curator and head of the Exhibition Department at MACBA from 2004-8.

In 2005, Mari was curator of the Spanish Pavilion at the 51st Venice Biennial.

From 2010-13, Mari was secretary treasurer of the International Committee for Museums and Collections of Modern Art, where he served as president from 2014-16.

Mari was born in 1966 in Ibiza, Spain. He has a degree in philosophy and sciences of education from the University of Barcelona. 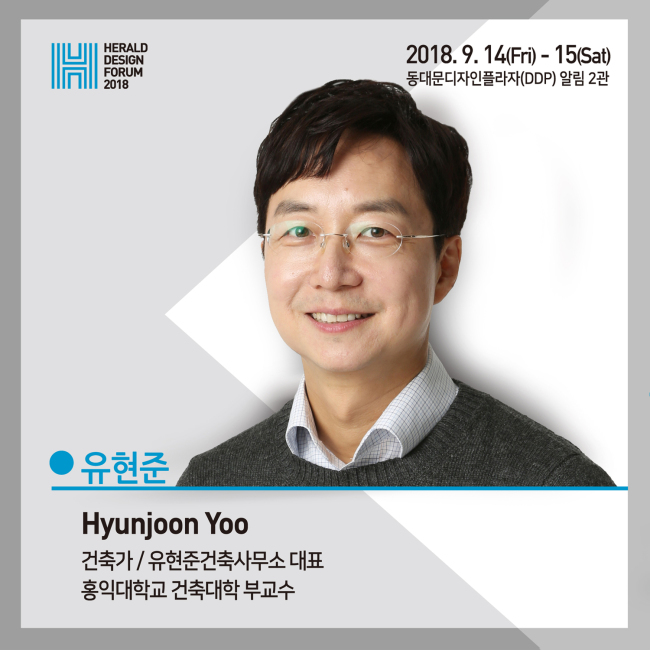 Yoo Hyun-joon
Yoo Hyun-joon is perhaps one of the architects most widely known to the public here. Yoo started to gain a public reputation after publications and particularly after making appearances on a local TV program.

A professor at Hongik University School of Architecture since 2005, Yoo also runs Hyunjoon Yoo Architects, which he founded in 2007.

Yoo is known for a minimalistic approach to architecture, partly influenced by his experience at Richard Meier & Partners Architects, New York between 2003 and 2005.

Yoo has won numerous architecture awards here and abroad, including the Korean Architecture Award in 2015 and Kim Swoo Geun Prize Preview Award in 2013, among others.

“Floating House” was listed among CNN Travel’s list of “Seoul’s architectural wonders,” a selection of 15 notable buildings in the capital.

Yoo earned a bachelor of science in architecture at Yonsei University in Seoul and master’s degrees at Harvard University and MIT. 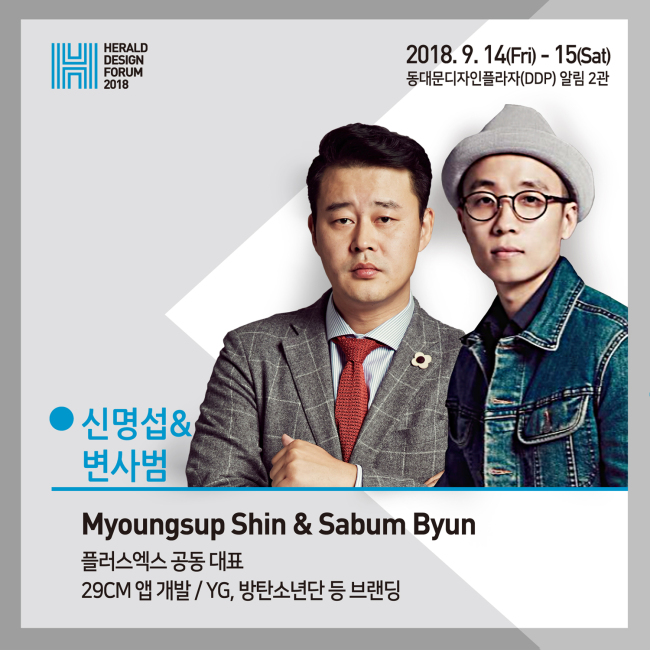 Established in 2010, Plus X is well known for its brand marketing for BTS, Hyundai Card the Red Package, YG Entertainment and 11St, a major online shopping platform, among many others.

The agency is trying to increase its market footings abroad. In the last year, Plus X has finished projects with companies like Alipay, NetEase and Tencent.

Over the last 6-year period, Plus X has won 52 awards here and abroad, including Red Dot design award and IF communication award. 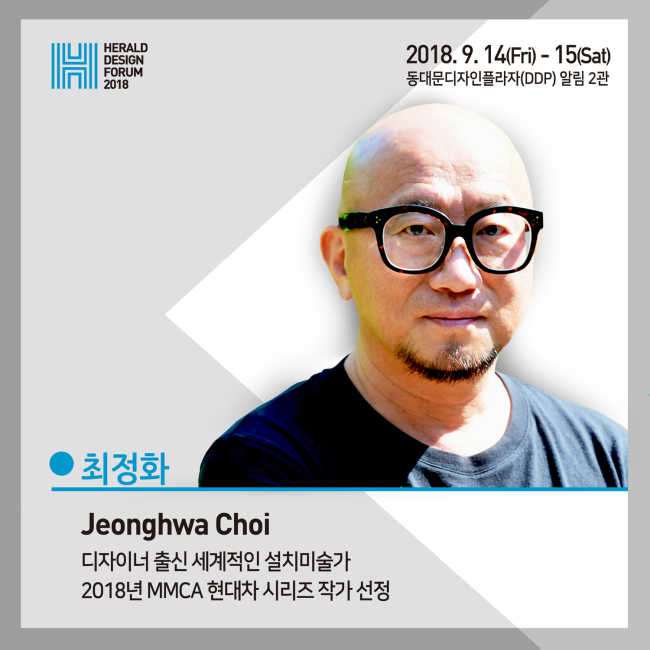 His works have been shown at many prestigious biennials of contemporary art, including the Arsenale Kyiv in 2012, 17th Sydney Biennial in 2010, Gwangju Biennale in 2006 and the Korean pavilion at the Venice Biennale.

In addition, Choi’s “Happy Together” exhibition -- also known as “Plastic Jungle” -- was well received at the Kiasma Museum of Contemporary Art in Helsinki in 2016.

Choi recently served as the artistic director for the Paralympic Games in PyeongChang. Earlier this year, Choi was selected by the National Museum of Modern and Contemporary Art for the MMCA Hyundai Motor Series. 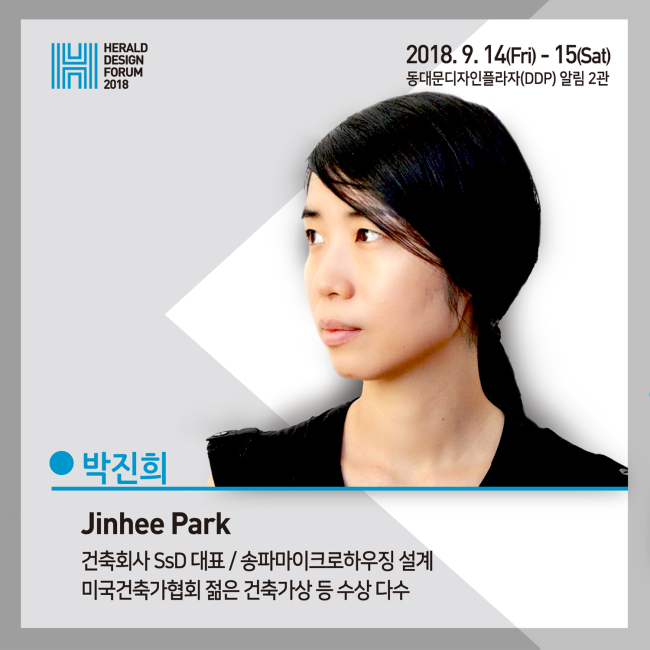 Park’s works are particularly marked by “micro housing,” an architectural concept to bring a small area into a comfortable living space amid rising urban density and growing housing price.

Park is currently an adjunct professor at Columbia University Graduate School of Architecture, Planning and Preservation.

Park served as a design critic in architecture at Harvard Graduate School of Design from 2009-13 and the Morgenstern chair professor at the Illinois Institute of Technology in 2008. 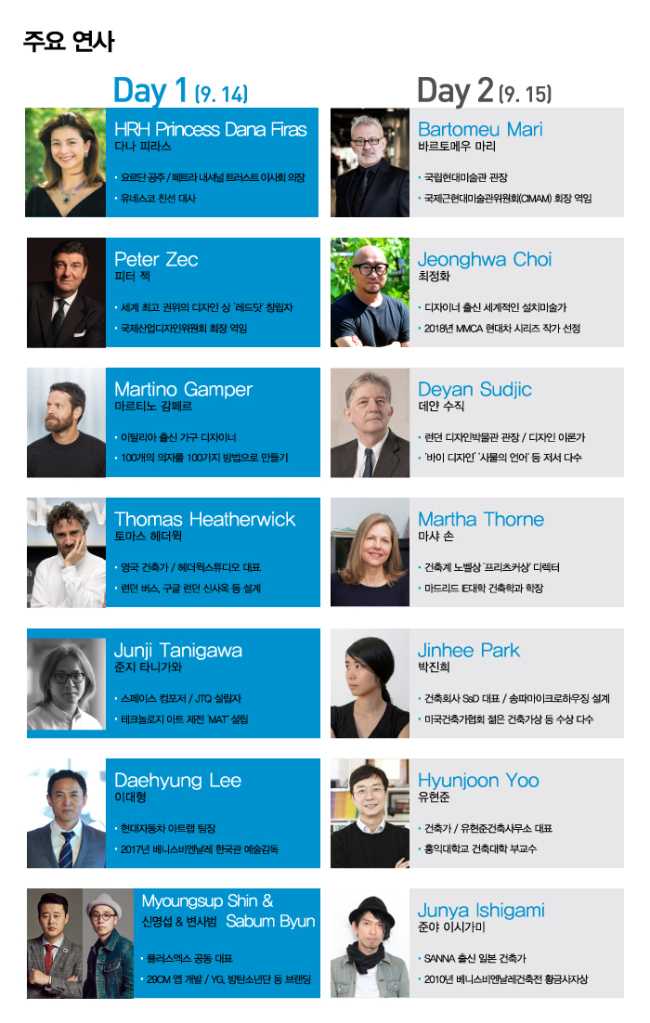