In the past months, six local business groups have announced plans to make new investments worth more than 330 trillion won ($290 billion) and hire 188,000 workers, with investment periods spanning one to five years.

With 130 trillion won of the sum allotted to be invested domestically, the investment plan focuses on building up new growth engines of artificial intelligence, the fifth-generation network, bio and automotive electronics, as well as bolstering its mainstay chip business. 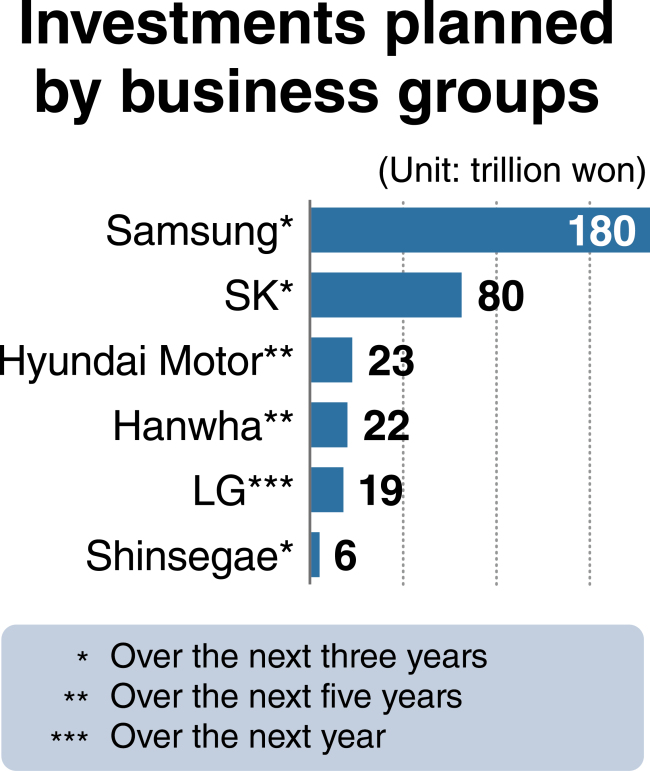 Samsung was preceded by LG, Hyundai Motor, SK and Shinsegae and followed by Hanwha in disclosing investment plans. The amount to be invested by them respectively ranges from 6 trillion won to 80 trillion won.

Economists note such large-scale investments by major business groups would lead to reinvigorating the sluggish economy.

“There is the possibility that an increase in employment and consumption that would stem from the announced investment plans could bolster this year’s economic growth rate by up to 0.2 percentage points,” said Oh Jung-geun, a professor of IT and finance at Konkuk University.

With large corporations taking the lead in increasing investment, other companies are expected to become more positive in making investment decisions.

Economists say the government should help further boost such investment momentum by pushing through regulatory reforms.

“Investments in the sectors related to the ‘fourth industrial revolution’ cannot be expected to be boosted unless the government lifts regulatory restrictions,” said Kang Sung-jin, a professor of economics at Korea University.

The investment plans unveiled by the country’s four largest conglomerates -- Samsung, LG, SK and Hyundai Motor -- will especially hold the key to whether Korea will be able to surmount challenges from China in high-tech industries.

Their investments planned for the coming years, which account for about 20 percent of Korea’s annual gross domestic product, center on information technology and other innovative sectors, in which China is pushing to secure global domination.

Kang called for the administration to go all out in regulatory reforms to help Korean firms compete with their Chinese rivals backed by the state in the era of the fourth industrial revolution.


President Moon Jae-in has recently stepped up efforts to push for deregulation.

In a meeting with his secretaries and policy advisers last week, he renewed emphasis on the urgent need to overhaul regulations to nurture new industries and create more jobs.

On the following day, he took a more concrete step toward deregulation by pledging to hasten efforts to lift the limit on the ownership of a nonfinancial firm in internet-only banks. In the face of resistance from many ruling party lawmakers as well as civic groups, the passage of bills designed to allow nonfinancial firms to raise their stakes in online banks has been blocked over the past year.

Officials at the presidential office say Moon plans to address other targets for deregulation in the coming months, stressing regulatory reforms are atop the policy agenda.

Moon appears compelled to carry forward innovation-fueled growth by lifting regulations as his administration’s income-led growth policy driven by pro-labor measures has only resulted in a cut in jobs and earnings for low-income people.

But critics say it has yet to be seen whether Moon would overcome vehement objections from his political supporters to regulatory reforms, which they argue would only benefit large businesses.

The corporate circle remains skeptical about the possibility of the Moon administration turning to business-friendly policies. What has confused corporate officials are contradictory messages from Moon and his aides.

Major conglomerates unveiled investment plans in time for Economy and Finance Minister Kim Dong-yeon’s visit to their workplaces. He has taken a pro-corporate stance, publicly disagreeing with some presidential aides who stick to reining in big businesses, to press ahead with innovation-driven growth.

A key aide to Moon was recently reported to have criticized Kim for begging for investments from conglomerates. The report apparently affected Samsung’s decision to delay the announcement of its investment plan until days after Kim’s visit to its semiconductor factory early last week.

In last week’s meeting with officials from the country’s online banks, Moon reiterated that speed and timing are keys to regulatory reforms and Korea may lead the fourth industrial revolution when “we overhaul our regulations in time.”

But critics note such rhetoric falls short of giving confidence to the corporate circle as long as there is no fundamental change in the Moon administration’s anti-business stance.

Kang, the economics professor, said it is time for Moon to take the courage to dump some of his election pledges at the risk of alienating his support base to carry through regulatory reforms.