A continuous increase in the minimum wage amid sluggish domestic demand is set to add to precipitating the pace of debt growth.

According to data recently submitted by the Bank of Korea to a lawmaker, the outstanding debt held by self-employed businesses in the country amounted to 549.2 trillion won ($487 billion) last year, up 14.4 percent from the previous year. The increase was the steepest since 2013. 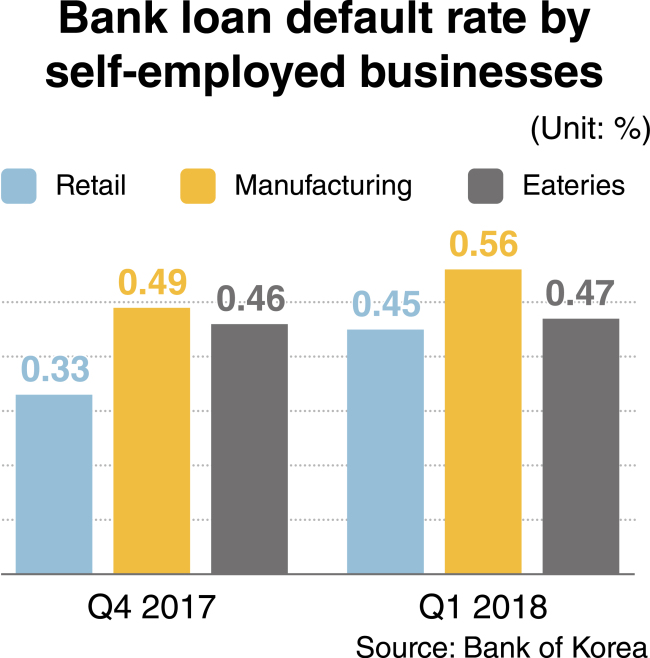 There are concerns that borrowings by self-employed businesses will grow at an even faster pace in the coming years as they strive to stay afloat amid increasing costs and decreasing sales.

Their borrowings from local banks rose by 13.3 trillion won from a year earlier in the first half of this year, compared with the on-year increase of 11.4 trillion won in the same period of last year.

Those from nonbank lending institutions, which have yet to be compiled, are estimated to have grown by a far greater extent.

Nonbank lenders’ proportion of debts owed by self-employed businesses rose from 24.9 percent in 2015 to 30.6 percent last year, according to figures from the central bank.

The growing proportion of borrowings from nonbank lenders, which carry higher interest rates and have a shorter period of maturity, heightens the potential risk from soaring debts owed by self-employed businesses.

Despite reduced turnovers amid slumping domestic consumption, many self-employed businesses, which hire a few part-time or temporary workers, are burdened by rising costs attributed mainly to a steep increase in the minimum wage.

A commission comprising members representing public interests as well as management and labor circles last week decided to raise the minimum wage by 10.9 percent from this year to 8,350 won per hour next year.

Self-employed businesses have vehemently protested the decision, which was made without the attendance of employer representatives, saying the increase rate was far beyond their ability to pay.

They have already been reeling from the fallout from a 16.4 percent rise in the minimum wage this year, the first double-digit increase in more than a decade. The increase ranged from 5.1 percent to 8.1 percent in the previous years.

Defying the commission’s decision, an association of small business owners said its members would decide on next year’s minimum wage through “autonomous consultations” with their employees.

Some minimum wage workers, especially in the retail, eateries and lodging sectors that have shed many jobs subject to the wage floor this year, may well have a reason to agree to proposals from their employers.

“Another sharp increase in the minimum wage will further aggravate difficult conditions faced by most self-employed people,” said Cho Young-moo, an economist at the LG Economic Research Institute, a private think tank.

Cho and other experts raise the need to help ease the debt burden of self-employed businesses by taking measures designed to increase their income and refraining from tightening regulations on loans to them. They note tighter regulations would result in expanding borrowings from nonbank lenders that carry higher rates and shorter maturities.

Heavily-indebted self-employed businesses have been regarded as the weakest link of the Korean economy.

According to BOK data, the ratio of self-employed people’s financial debt to income stood at 189.1 percent as of the end of March last year, compared with the total household average of 150.6 percent.

A study by the National Assembly Budget Office estimated that a 1 percentage point rise in rates would result in getting self-employed people to make an additional interest payment of 1.22 million won on average annually, compared with 941,000 won for other households.

In a sign of growing potential risk to financial stability, the rate of default on bank loans has increased among self-employed businesses.

By contrast, the bank loan default rate for total households edged down 0.01 percentage point to 0.25 percent.

Low-income self-employed people have suffered the steepest decline in earnings since President Moon Jae-in’s administration was launched in May last year with a pledge to push for income-led growth.

The poorest 20 percent of households saw their average monthly income fall 8 percent from a year earlier in the first quarter of this year, with the decrease being faster at 13.8 percent for self-employed households in the group.