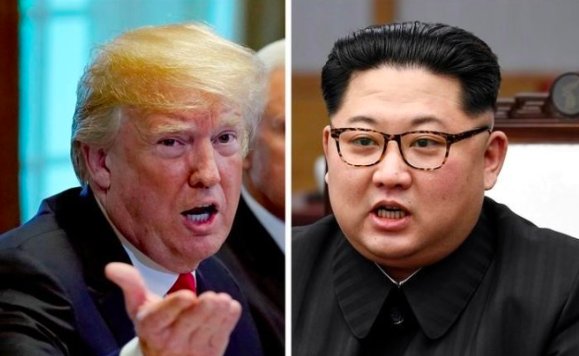 "NSC members agreed that it is important for our government to continue its efforts to improve inter-Korean relations in accordance of the April 27 Panmujom Declaration and that such efforts will contribute to improving U.S.-North Korea ties and building momentum for a complete denuclearization of the Korean Peninsula," top presidential press secretary, Yoon Young-chan, said.

The abrupt announcement came hours after North Korea demolished its Punggye-ri nuclear test site in front of international journalists in a northeastern mountainous part of the country.

In response, North Korea's Vice Foreign Minister Kim Kye-gwan said Friday that his nation is still willing to talk with the United States to resolve pending issues "anytime and in any format."

Cheong Wa Dae stressed that the government will do its part to help Trump and Kim directly communicate so as to enable them to sit down for talks in the future.

"It will be much more effective for them to communicate in a direct way to grasp what the other party has in mind," said a ranking presidential office.

"At a time when the U.S.-North summit has hit a snag, there is a need for direct and open communication channels between them," he added.

As for the possibility of Trump's summit with Kim, the official said, "The South will do its best to bring peace to the peninsula as long as a thread of hope is alive."

Experts raised the need for Moon to use a recently installed hotline to talk to the North's leader.

South and North Korea set up the telephone hotline between their leaders last month ahead of their summit on April 27, but President Moon Jae-in and Kim Jong-un have yet to use it.

"For now, we are not considering picking up the phone," the official said. "The two leaders will talk on the phone in due time." (Yonhap)