North Korea did not issue visas to South Korean journalists initially invited to cover the closing of the Punggye-ri nuclear site, which it said would happen between Wednesday and Friday, without elaborating on reasons. 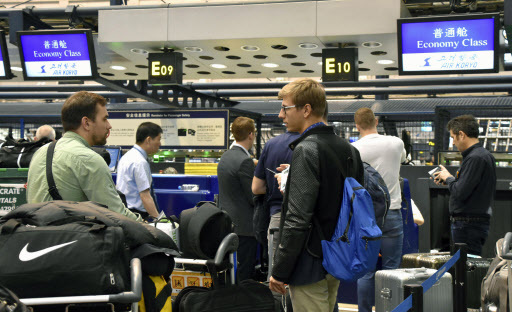 Foreign reporters wait in line at the check-in desk at the Beijing Capital International Airport, Tuesday.(Yonhap)

North Korea hopes to show its willingness to denuclearize and hold a summit with the US scheduled for June 12, but also wants to steer the summit in its favor by using inter-Korean relations, analysts say.

Foreign journalists from the US, China, Russia and the UK took a chartered plane bound for Wonsan, where a press center will be located, from the Beijing Capital International Airport around 9:48 a.m. Tuesday.

The South Korean government continued to try to notify North Korea of the names of eight South Korean reporters through a hotline at the truce village of Panmunjeom on Tuesday, but North Korean officials declined to accept the list, according to a government official.

“Still, we note that the dismantling of the Punggye-ri nuclear test site, an initial step to denuclearization the North promised, is proceeding as scheduled, and we expect it to lead to a successful hosting of the North Korea-US summit,” he said in a statement.

South Korean reporters were on standby in Beijing since Monday, but they could not board the plane arranged by Pyongyang.

Foreign news media outlets heading to the North include Sky News from the UK, CNN from the US, CCTV from China and RT from Russia.

“We’re going to go in there with our eyes wide open and we’ll see what happens,” Will Ripley, a CNN correspondent, told reporters before departing from the airport.

Won Jong-hyok, a Beijing correspondent for North Korea’s state-run Rodong Sinmun, appeared at the airport to check on foreign journalists leaving for North Korea and expressed his regret.

“It would be great if South Korean reporters were able to attend the ceremony. As a journalist, (it is regrettable.) I am also a journalist,” he was quoted as saying by Yonhap News Agency.

Won, however, floated the possibility of South Koreans being allowed into the North in the coming days.

“The date (for the ceremony) is set between May 23 and 25, depending on the weather so I think South Korean reporters could still go tomorrow, though they couldn’t get on board the plane today,” he said.

The reporters are expected to travel to the Punggye-ri nuclear site, where the North conducted all six of its nuclear weapon tests, from Wonsan by a special train. 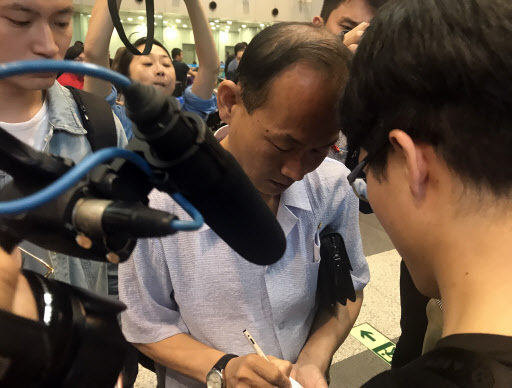 Given the timing of the North’s exclusion of South Korean reporters from the ceremony, experts say that Pyongyang is pressuring Seoul -- an easier target -- to extract more concessions from the US.

Pyongyang has stepped up pressure on South Korea since it unilaterally canceled high-level talks with the South on Wednesday, denouncing ongoing joint South Korea-US air combat drills. It also threatened to pull out of a summit with US President Donald Trump, scheduled for June 12 in Singapore.

“For North Korea, it would be a risk to face the US head-on and pull out of its summit with the US. So the North is tying any improvement in inter-Korean relations to the success of the North Korea-US summit,” said Ko Myong-hyun, a research fellow at the Asan Institute for Policy Studies.

South Korean President Moon Jae-in is in Washington to meet with Trump to reassure him the direct talks with North Korea can still be the success, amid growing skepticism over the North‘s seriousness about denuclearization.

“North Korea still going ahead with closing the Punggye-ri site shows its willingness to denuclearize and hold a summit with the US,” he said. If the North Korea-US summit goes well, inter-Korean relations will also improve.”

Hong Min, senior researcher at the Korea Institute for National Unification, said it is North Korea’s way of expressing its discomfort toward the US.

“I expect North Korea to continue using inter-Korean relations to send a message to the US until the summit,” he said.

The North is unhappy with the US making it look weak and wants to make sure other issues such as human rights are not brought up during the summit, which could embarrass and undermine the North Korean regime, he said.

“The North also seems to express its displeasure about South Korea and the US not taking any measures of good will in response to the North’s voluntary action to denuclearize,” he said, referring to the North’s closure of the Punggye-ri site.

Pyongyang said earlier this month that it would dismantle the nuclear test site in the country’s mountainous northeastern region and disclose the process to media and experts, touting it as “meaningful.”

But it is unclear whether the North invited any experts, raising concerns that the actual condition of the site and the dismantling process will not be properly assessed.