[Album review] Ben, please stick to what you’re good at 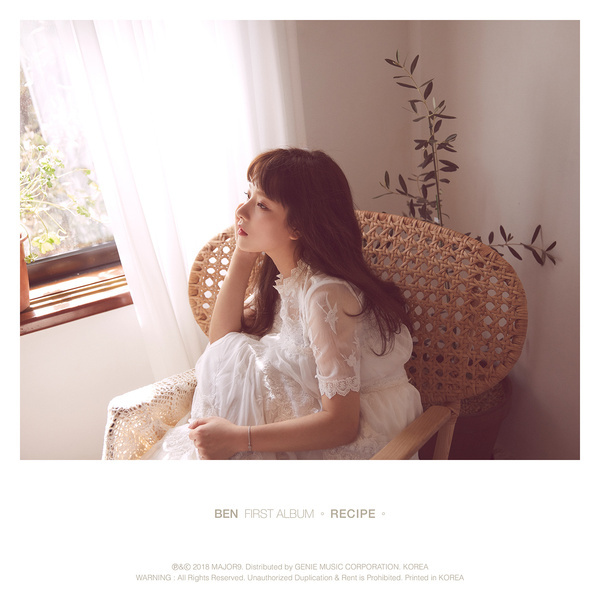 Singers are divided into two categories: Those who have consistently released albums under their names and those whose resumes are fronted by “soundtracks” and “featuring.”  Ben belongs to the latter, as most of her songs, technically not hers, have been soundtracks of drama series until her first full-length album “Recipe” recently came out.

Unfortunately, there seems to be a reason why her voice was heard mostly in sad ballad songs. Her voice has a narrow spectrum; it suits poignant drama soundtracks, but not so well for other genres.

Ben’s unique voice, piercingly high-pitched, has often been compared to legendary female vocalist Lee Seon-hee. The difference is, Ben‘s voice sounds more like it is being squeezed out. Ben’s vocals are also a double-edged-sword in that its magic is short lived and easily tires out listeners’ ears once it loses the balance between high and low tones. “In Love” the album’s lead track, is a classic tear-jerker ballad -- and wouldn’t be out of place as a melodrama soundtrack -- where Ben excels in delivering the most heart-breaking post-breakup emotion.

Let’s stop right there, because the rest of the album feels like baggy clothes that don’t fit the singer. In “Iced Coffee,” a jazzy upbeat track that depicts a couple sipping iced coffee in an adorable way, Ben’s voice loses weight and transforms the song into one of those lighthearted coffee shop songs. Things only get worse, as her voice gets coated with mechanical sound in “Blank,” which would have sounded better had it be acoustic. It actually sounds “blank” despite the synthesizers and Ben’s explosive high notes. She becomes more herself in “My Name” and “Love Recipe,” but still, heads-up to those who are allergic to high-notes, the songs soar high to the point where one may take the sound as noise.

Overall, Ben fails to make the best out of the 10-track album, despite her effort to show herself as a versatile artist. Sorry Ben, you sound best with sad ballad songs, so if you really want to shed your title as the “soundtrack singer,” how about sticking to what you’re good at?