By Cho Chung-un
Published : May 7, 2018 - 16:21       Updated : May 7, 2018 - 17:37
South Korean auto giant Hyundai Motor and its sister company Kia are expected to see a turnaround in their respective sales, with industry insiders raising their sales outlook for the second quarter.

The two are expected to post nearly 10 percent on-year sales growth, moving closer to their annual goal of 7.55 million units this year, according to officials with knowledge of the matter.


Driven by sales recovery in China, the two carmakers are expected to sell around 1.94 million vehicles in and out of the country in the April-June period, a 9.6 percent increase from 1.77 million units in the same period last year. In the first quarter, the two carmakers saw their sales growing 7.2 percent to 347,927 units from a year ago, ending an unprecedented sales decrease that lasted 14 months due to a diplomatic row between Korea and China.

The diplomatic spat between Seoul and Beijing over the deployment of an US anti-missile system dragged sales of Hyundai and Kia in China last year, dealing a blow to the world’s fifth-largest carmaker.

Amid easing tension between two neighboring countries, Hyundai and Kia are likely to achieve 5 percent growth in sales in the first half, according to internal reports on the carmaker’s regional sales. At home, the South Korean carmakers are likely to see a slight increase of 1 percent from a year ago, thanks to newly launched vehicles including the all new Santa Fe and K3.

In Russia, the company plans to unveil special editions of popular vehicles including the Rio, Tucson and Sportage. Hyundai is the second-largest carmaker in the Russian market, followed by Kia.

In the emerging markets of Brazil and India, the carmakers have set higher sales targets for the second quarter, at 16 percent and 9 percent, respectively. In the traditional markets of Western Europe and the US, the company has decided to focus on maintaining its sales performance, instead of raising outlook. 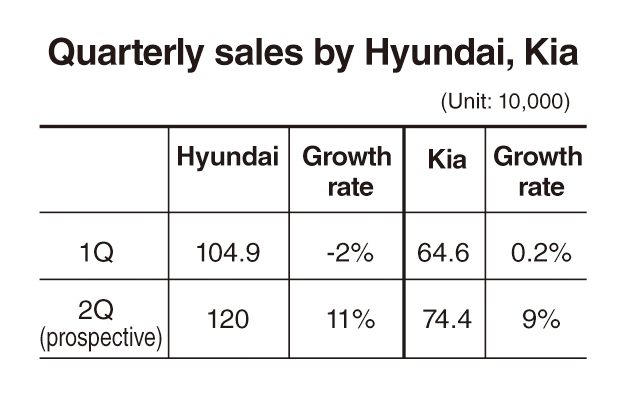