Underlying the trend is a widening polarization between large and small companies and between exporting and domestically focused firms, experts say.

What is further concerning is the economy is set to face severe downside risks in the latter half of this year when the impact from deteriorating external and internal conditions will begin being fully felt. 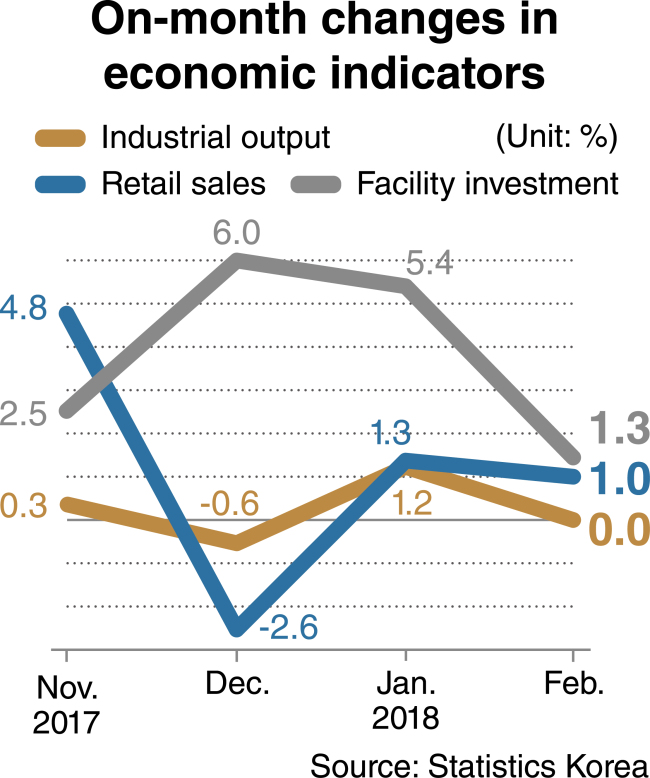 According to figures released by Statistics Korea last week, the country’s industrial output in February remained unchanged from the previous month that saw a 1.2 percent on-month increase.

Production in the manufacturing sector grew 1.4 percent last month mainly on the back of a surge in the output of cars and chips, which increased 5.1 percent and 4.7 percent, respectively.

The modest improvement in economic indicators has failed to reverse a slowdown in employment.

The on-year increase in the number of employees in the country stood at 104,000 in February, the lowest in more than eight years.

The number of jobless people amounted to about 1.26 million last month, an increase of more than 200,000 from the previous month.

A sharp rise in the minimum wage and plans to shorten work hours have pushed employers, particularly small companies and self-employed businesses, to cut their payrolls to cope with rising labor costs.

A continuous rise in exports have done little to create more jobs as chipmakers and other large manufacturers that account for most of the country’s outbound shipments rely more on investments in facility and equipment, moving an increasing portion of production abroad.

Experts note this modest expectation is far from guaranteed, given worsening external conditions, including a potential trade war between the US and China and the prospect for a string of additional US interest rate hikes.

South Korea remains highly vulnerable to fallout from escalating trade tensions between the world’s two largest economies, on which it depends for nearly 40 percent of its exports.

The country’s monetary policymakers face a deepening dilemma over whether and how fast to raise rates.

A reversal of rates between South Korea and the US came last month, as the Bank of Korea kept its key rate at 1.5 percent while the US Federal Reserve decided to jack up its policy rate by a quarter percentage point to 1.5-1.75 percent, suggesting at least two more hikes this year.

A further widening of the rate gap may prompt capital flight from the country, but mounting household debt and a slowdown in employment have left BOK policymakers cautious about raising rates.

An eventual rate hike, coupled with mounting US pressure on Seoul to refrain from intervening in the currency market, would result in strengthening the Korean won and making Korean products more expensive abroad.

“Another potential threat is (the failure of) the planned negotiation between North Korea and the US on discarding the North’s nuclear programs,” said Shin Se-don, an economics professor at Sookmyung Women’s University.

Heightened tensions on the peninsula in the wake of a breakdown in the nuclear talks would have a grave impact on the economy, he added.


In what seemed a precursor to what could happen down the road, President Donald Trump last week threatened to “hold up” a renegotiated free trade agreement between the US and South Korea until he reaches a nuclear deal with Pyongyang.

Calling the trade accord a “very strong card,” Trump hinted it could be used as leverage to push Seoul to be more active toward denuclearizing the North.

Officials at the Ministry of Strategy and Finance say they would step up policy efforts to manage external and internal risks for the economic recovery to lead to an improvement in employment and people’s livelihoods.

But experts say there is a high possibility the economy will take a downturn in the coming months, casting a shadow over the government’s growth outlook for this year, set at 3 percent.

The Hyundai Research Institute, a private think tank, recently forecast that the economy would grow 2.6 percent in the second half of the year, following a 3 percent expansion in the first six months.

Economists raise the need for South Korea to increase domestic demand, noting the country remains at the bottom among major economies in terms of local demand’s proportion of gross domestic product.

The country’s household income had decreased for eight consecutive quarters before recording a 1.6 percent increase in the last three months of 2017.

The corporate sector also saw its share decrease from 20.6 percent to 20.2 percent over the same period, with the government’s proportion expanding from 23.1 percent to 23.8 percent.

Experts say what should now be done to boost domestic demand is to accelerate deregulation and labor reforms to help boost corporate activity and create more jobs, criticizing government policymakers for being preoccupied with restrictive measures that increase burdens on companies and drive low-wage workers out of their jobs.