Posco leaps toward greater 50 years ahead

“Every two minutes and 30 seconds, a slab becomes a coil of steel plate with rollers pressing down and water filtering out impurities. In a year, we process 3.5 million tons of steel slab directly delivered from four blast furnaces,” said Sung Jun-kyung, an engineer at Posco’s hot rolling division, as he led a group of Korean reporters. Steel slab refers to molten steel from blast furnaces molded into solid bars.

“The amount of steel processed a year is equivalent to 3.5 million passenger cars,” he said proudly.

The hot rolling mill labeled “No. 1” is only a small portion of the steelmaker’s gigantic manufacturing facility in Pohang, some 360 kilometer southeast of Seoul.

Often dubbed the birthplace of South Korea’s economic miracle, the 9-million-square-meter complex is three times larger than Seoul‘s financial district of Yeouido, housing four blast furnaces, two hot-rolling and two cold-rolling steel mills, ports and railroads -- all needed to turn a combination of iron ore and coking coal into steel – and which have become the basis of the industrial economy.

The war-torn country in the 1960s was in dire need for steel to manufacture ships, cars and electronic devices. The Park Chung-hee administration spent $123 million on the steel project, a part of the Fund of the Claim between South Korea and Japan, borrowed in the event of the normalization of the bilateral relations. Three years after breaking ground on a land reclamation project near Yeongil Bay, the company, with the support of Japanese companies, produced the first iron melts in 1973.

“With Posco producing the first iron melt, we opened the ‘Iron Age’ for the country,” said Kim Doh-yeon, chairman of Postech, a science and engineering university established and funded by Posco.

Since then, the steelmaker has endured a rollercoaster ride.

In its first year, Posco produced 449,000 tons of steel. Forty-nine years later, it become the world’s fifth-largest steelmaker with an annual capacity of 41.56 million tons, according to the World Steel Association. In terms of market capitalization, Posco ranked third among steelmakers around the world, valued at $26.67 billion, as of March.

To meet rising demand on steel along with the nation’s rapid economic growth, the steelmaker built its second integrated steel mill in Gwangyang Bay, South Jeolla Province, between 1985 and 1992.

In 1992, the steelmaker stepped forward technologically, developing an eco-friendly and cost-efficient steelmaking process named “Finex,” marking a first in the world.

The 1997-98 Asian Financial Crisis pushed the privatization of the state-run steelmaker. In 2000, the company became a private entity, opening its doors to the global market. The company built its first integrated steel plant overseas in Indonesia in 2013. Nearly 60 percent of investors in Posco are now from overseas. The company supplies 10 percent of auto steel around the world, the second-largest volume after its German rival ArcelorMittal. 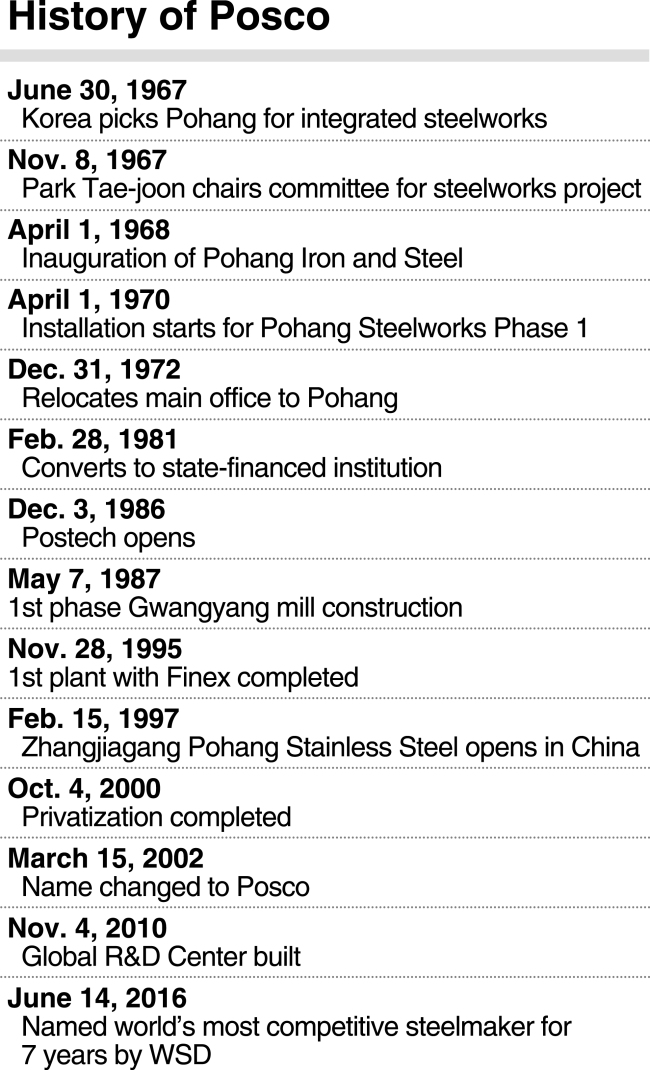 Currently, about 80 percent of its profit comes from Posco’s steel and related businesses. In the next 50 years, Posco will reduce the contribution level of steel to its overall profit to 40 percent, and increase infrastructure business including trading, energy and construction to 40 percent, he said. The rest of the profit will be generated from Posco’s new businesses, including bio and lithium, he added.

“We can’t become a company with 100 years (of history) just with steel, it is important to diversify our businesses,” he told reporters.

“It doesn’t mean that we’ll reduce steel production. It means we’ll go for high value-added products,” he said, adding it has been years since the steel market reached saturation.

The CEO also said every Posco business will operate based on artificial intelligence.

“My goal is to apply AI to all of Posco’s operations, and provide smart solutions to all of the manufacturing sector,” said Kwon.

The steelmaker has already developed a blast furnace autonomous control system as part of its “smartization” project.

The system predicts temperature changes inside of blast furnaces and modulates fuel usage based on data collected from 1,000 sensors and pyrometers. The company also uses radar to track the quality of coking coal.

“We produce 250 tons more a day since we adopted the smartization system last year, as well as saving 4 kilograms per ton of carbon fuel.”