Korea moving to be clear on currency intervention

Korea is moving to free itself of the possibility of being designated by the US as a currency manipulator, which remains an uncertain factor for its exporters after the two countries this week reached an agreement on amending their bilateral free trade deal and exempting Korea from US steel tariffs.

The Ministry of Strategy and Finance and the Bank of Korea said in a joint statement earlier this month they had studied plans to advance the foreign exchange market in the country.

No decision has been made on details of such plans, according to the statement.

But officials at the ministry and the central bank suggested consideration was being given to disclosing records of the authorities’ intervention in the foreign exchange market.

The measure would hopefully help boost the transparency of Korea’s currency market in line with what has been recommended by the International Monetary Fund and clear the country of suspicion of currency manipulation.

In October, the US Treasury Department kept Korea and five other nations on its monitoring list for suspicious currency practices, stopping short of officially labeling the country a currency manipulator.

It is set to release its next semiannual currency report in April.

BOK Gov. Lee Ju-yeol said in a statement submitted to the National Assembly ahead of his confirmation hearing last week that it was not guaranteed Seoul would continue to avoid being designated a currency manipulator.

“According to the US law, there is a low possibility that Korea will be designated a currency manipulating country. But it’s hard to predict as the issue is closely related to US trade policies,” said Lee, who will begin his second four-year term on April 1.

Designation as a manipulator would have a far-reaching negative impact on Korea’s exports to the world’s largest economy, including stiff punitive tariffs and restrictions on bidding for public procurement programs.

Korea’s financial authorities have claimed they do not interfere in the foreign exchange market, but rather engage in “smoothing operations” against extreme fluctuations.

Citing the possibility of exploitation by international speculators, they have refused to disclose details of currency intervention since the opening of the country’s foreign exchange market in 1962.

But Korea has been under increasing pressure from the IMF and the US to make public records of its intervention in the currency market.

The IMF has continued to urge Seoul to take the step since it first made the demand in its 2016 report on the Korean economy.

The US Treasury also mentioned Korea’s refusal to go public on foreign exchange market intervention in its latest currency report.

What is particularly weighing on financial policymakers here is the toughening stance of President Donald Trump’s administration on foreign states’ practices to keep their currencies undervalued, which it claims unfairly disadvantage US exports and give an edge to its trading partners.

The Korean won has appreciated against the US dollar in recent months as Asia’s fourth-largest economy continues to record current account surpluses on the back of increasing exports.

A reversal of interest rates between Korea and the US is expected to cause the won to be losing its value against the greenback. 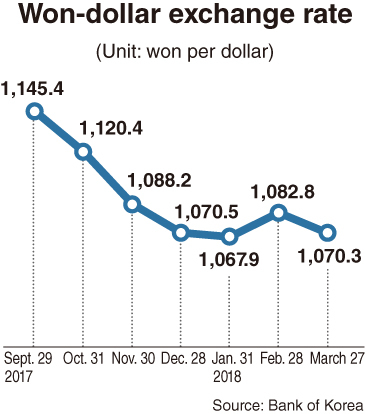 Concerns over mounting household debt and a slowdown in job creation have left the BOK cautious about raising its key rate, which has been kept at 1.5 percent since November, despite the US Federal Reserve’s decision last week to jack up its policy rate by a quarter percentage point to 1.5-1.75 percent.

The three criteria for designation as a currency manipulator are an annual trade surplus with the US above $20 billion; a current account surplus surpassing 3 percent of gross domestic product; and a persistent one-sided engagement in the currency market with a net purchase of foreign exchange exceeding 2 percent of GDP.

Korea, which has met the first two requirements, has been nervous about the possibility of the US judging it to fall under the third category.

According to official data, Korea’s net purchase of foreign currencies hovers around 0.3 percent of its GDP.

If this is the case, disclosing records on currency intervention would help erase the possibility of the country being named as a manipulator.

Among the Group of 20 economies, only Korea, China and Turkey have not made intervention records public.

Most countries disclose records one month after intervention, with India and the US revealing them two and three months after, respectively.

“Given various conditions, consideration (of disclosure) is underway in a positive direction,” said a BOK official on condition of anonymity.

The measure also needs to be taken if Korea intends to join the revived Trans-Pacific Partnership trade accord, which the US is moving to re-enter, as all of its 11 members make public records on currency intervention.

But some experts here raise the need for the country to be more cautious about taking the step.

They note Korea is in a different situation from countries that enjoy reserve currency status or suffer from large trade deficits.

“What the US raises issue with is trade surplus rather than foreign exchange intervention,” said Sung Tae-yoon, a professor of economics at Yonsei University.

In the worst case, Korea might end up losing a policy tool to help ease burdens on local companies and economic management, while also failing to provide a satisfactory answer to the US, he said.