Korea to walk a tightrope in US-China trade row

Intensifying trade conflicts between the US and China might get Beijing to be more positive on reaching the three-way accord, which would create the world’s third-largest trade bloc after the North American Free Trade Agreement and the EU.

The three Northeast Asian countries combined accounted for 23.3 percent of global gross domestic product and 18.3 percent of its trade in 2016, according to World Bank data.

A local think tank forecast Korea’s annual GDP would grow by up to 3.38 percent additionally if the trilateral trade pact was put in place.

Seoul officials have pledged to make efforts to ensure comprehensive and high-level trade liberalization through the three-way negotiations.

“It is important for Korea, China and Japan to show a firm will to advocate free trade amid deteriorating global conditions,” said Korea’s top negotiator Kim Young-sam at the start of the 13th round of trilateral talks in Seoul last week.


He called for active efforts by the three nations to make progress toward achieving a free trade deal with a view to accelerating regional economic integration in Northeast Asia.

The trilateral negotiations coincided with the first round of talks on upgrading the bilateral free trade accord between Korea and China to lower barriers in the service and investment sectors.

Expectations have been raised here that the revamped deal would help Korean companies to tap into China’s fast growing service market.

The size of China’s service sector was estimated at $5.6 trillion in 2016, the world’s second-largest after the US.

Services trade between Korea and China increased from $2.7 billion in 1998 to $36.7 billion in 2016, approximately quadruple the rate of growth in global services trade, according to the Ministry of Trade, Industry and Energy here.

China accounted for 22 percent of Korea’s services exports in 2016, which totaled $94.9 billion.

“The time has come for Korea and China to put tough times behind them and raise their economic and trade relations to a new level,” said Kim, who also headed the South Korean delegation in the talks with China on revamping the bilateral trade accord.

By the expression of “tough times,” he apparently referred to China’s boycott of Korean goods and cultural contents last year in retaliation against Seoul’s hosting of an advanced US missile defense system here.

Despite the possibility of China taking a more positive stance, Korea might see progress in the two sets of trade talks being held back amid the fallout from a brewing trade war between China and the US.

President Donald Trump last week signed an order that would impose punitive tariffs on up to $60 billion worth of Chinese technology and consumer goods to punish Beijing over its practices to acquire American intellectual property.

China also was noticeably subject to stiff US tariffs on steel and aluminum imports, which came into force Friday, with Korea temporarily exempted along with the EU and five other countries.

China responded by threatening retaliatory tariffs on $3 billion worth of US goods, sparking fears of a spiraling trade dispute between the world’s two largest economies. 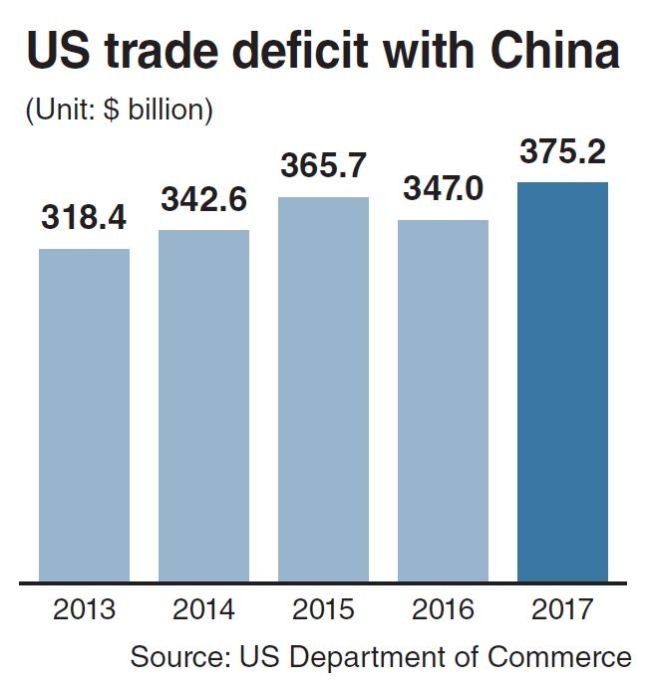 The widening trade imbalance between the US and China is an immediate reason for Washington’s trade actions. Data from the US Department of Commerce showed US trade deficit with China grow from $318.4 billion in 2013 to $375.2 billion in 2017.

Behind the Trump administration’s moves, however, is a more fundamental and serious concern about China’s attempts to surpass the US in high-tech and digital areas, as suggested by restrictions on Chinese investments in the US.

Commentators say this indicates the looming trade war between the US and China will be structural and protracted, not easily settled by Beijing’s possible offer of concessions and promises to improve its trade and investment practices.

Nothing could do more damage to the export-dependent Korean economy than the trade conflict between China and the US, on which it relies for about 25 percent and 12 percent of outbound shipments, respectively.

Particularly, a decrease in China’s exports to the US would result in a sharp drop in the shipment of Korean intermediary goods to China.

Intermediate products accounted for more than 60 percent of Korea’s total exports in 2016. And nearly 30 percent of its shipment of those goods abroad in that year went to China, according to a report from the Korea Institute for International Economic Policy.

Korea may also be squeezed hardest between pushes by the US and China to draw other countries into their folds in the escalating trade dispute between them.

In the process of negotiations on being exempted from the metals tariffs, US negotiators reportedly called on the EU to stand by Washington in coping with Beijing’s unfair trade practices in a move that was seen as reflecting US efforts to form a united front with its allies against China.

Korea was said to have not faced such pressure while lobbying to be exempted from the tariffs.

Heo Yoon, a professor at Sogang University’s Graduate School of International Studies, said the US seemed to have focused on using the tariffs to draw more concessions from Korea in the ongoing talks to revise the bilateral free trade pact.

He noted Seoul might be pushed into taking the side of either Washington or Beijing in the second half of the year when a prolonged dispute on whether China should be granted the market economy status comes to conclusion.

During last week’s bilateral trade negotiations in Seoul, China called for Korea to collaborate with its efforts to stand up against rising global protectionism in a thinly-veiled reference to Trump’s “America First” policy.