The first episode of tvN’s new series “My Mister” premiered Wednesday night to a high viewership rating of 3.9 percent, but viewers showed mixed reactions on the drama. The rating was the second highest of tvN’s Wednesday-Thursday lineup, following “Prison Playbook.”

The series received massive attention from the public before its release, as the possible romance between the main characters with a large age gap stirred controversy. Fans of IU also welcomed the K-pop diva’s return to the small screen, as she hasn’t been seen in a TV drama since “Moon Lovers: Scarlet Heart Ryeo” in 2016.

The term “My Mister” swept Naver’s real-time trending bar Thursday morning, while over 147,000 tweets with the title spread across the social media platform as well. 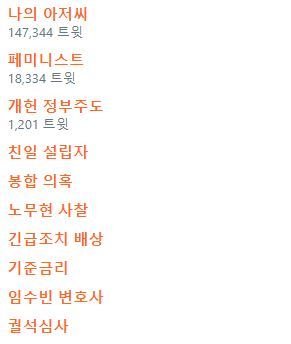 Many viewers gave favorable reviews of the first episode, but many also expressed rage or discomfort toward both the concept and the series’ violent scenes.

“There were no signs of romance in the first episode. Why do people react so sensitively over the issue (about romance between a middle-aged man and a young woman) that’s not even included in the drama?” one user posed in a review on Naver.

“I really liked the actors and actresses, soundtrack and direction of the drama. Can’t wait until the next episode!” a dissenting voice on Naver said in a comment that garnered nearly 700 likes in four hours.

“I thought I was watching a movie, not a TV drama. It’s amazing!” another comment says.

“Was it necessary to include the scene that a male actor brutally hits a skinny and weak actress like that? Also, the actress says ‘You love me, right?’ after the beating. How horrible is it to glamorize violence with love?” a Twitter user said. The tweet was quickly shared 1,400 times with 1,253 comments, mostly agreeing with the opinion.

“IU has bruises and scars on her face in the teaser video of the drama, as the concept of the drama is that a man clears her debt and beats her instead,” another Twitter user said. The tweet was retweeted over 25,900 times.

“I looked up the scenario of the drama, as many people showed discomfort about it. But wait, what’s the drama trying to say? Why should we see middle-aged men with love? I don’t get it,” read a tweet that was retweeted nearly 8,000 times.