Strategic approach needed to cope with US protectionism

Moon instructed his aides last month to confidently and resolutely deal with what he called “unreasonable” US protectionist measures. The instruction came days after the US Department of Commerce released a report recommending President Donald Trump impose stiff tariffs on steel and aluminum imports.


A senior economic aide to Moon later described it as suggesting Seoul would handle the trade conflict with the US separately from security cooperation.

What has happened since then shows Moon and those who advise him on trade issues lacked understanding of what Trump believes is the best way to maximize US interests.

It is doubtful that his recent move to impose hefty tariffs on imported steel and aluminum at the risk of triggering a global trade war would lead to protecting domestic industries and bringing back lost jobs.

He still used the measure as leverage to secure further interests for his country.

Trump exempted Canada and Mexico from the tariffs on a temporary basis to draw more concessions from them in the ongoing renegotiation of the North American Free Trade Agreement.

Before signing the order authorizing the tariffs on March 8, Trump suggested other countries could be exempted, if they treated the US “fairly,” including by shouldering more defense costs.

“Many of the countries that treat us the worst on trade and on military are our allies as they like to call them,” he said.

A day after signing the tariffs, Trump said the US is working to exempt Australia, saying Australian Prime Minister Malcolm Turnbull “is committed to having a very fair and reciprocal military and trade relationship.”

Korea, the third-largest steel exporter to the US after Canada and Brazil, would be hit hardest, should it fail to be spared from the tariffs that will be put in place on March 23, while rival exporters are exempted.

The US has already slapped anti-dumping and countervailing tariffs on 88 percent of steel products imported from Korea.

In an awkward departure from its prior position to decouple trade issues from security ties, Seoul has been resorting to emphasizing the close alliance with the US to be exempted from the steel tariffs.

Chung Eui-yong, the top security adviser to Moon, asked for Korea’s exemption, citing the solid alliance, when he met his US counterpart during his visit to Washington last week to brief Trump on his earlier trip to Pyongyang.

In a letter sent to US Treasury Secretary Steven Mnuchin on Sunday, Finance Minister Kim Dong-yeon said that, in light of the close ties that exist between the two countries, Korean steel should not be hit with punitive duties.

“A failure to persuade the US to exempt Korea from the tariffs would reveal there is a serious problem with the government’s ability to engage with the US,” said Heo Yoon, a professor at Sogang University’s Graduate School of International Studies.

It would also deepen the impression Korea is receiving the harshest treatment from the Trump administration, though its trade surplus with the US dropped significantly last year, while the US imbalances with other countries widened.

Officials here say breakdown in talks to resolve US safeguard measures taken in January against washers and solar panels will force Korea to take the case to the World Trade Organization.

Concerns are growing US trade restrictions may spread to other sectors, including semiconductors that have bolstered Korea’s exports in recent years.

A looming global trade war prompted by Trump’s protectionist measures and retaliatory moves by China and the EU could also do a serious damage to Korea’s outbound shipments. 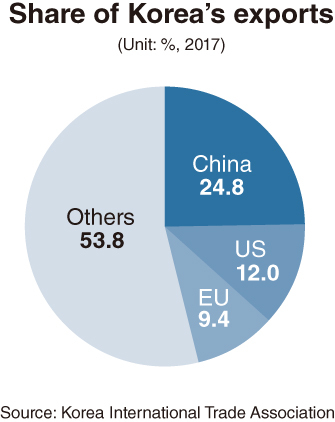 The US, China and the EU combined accounted for nearly half of the country’s exports last year.

Officials here have suggested Korea would consider filing a complaint with the WTO if it is not exempted from the steel tariffs.

But it would be impractical to challenge the case at the world body, from which Trump wants to withdraw the US.

Trump said last week that the WTO, which the US was instrumental in creating to help prevent trade wars, “makes it almost impossible for us to do good business.”

If the US exempts Korea from the steel tariffs, the exemption is likely to be temporary with a view to drawing more concessions from Korea in negotiations on revising a bilateral free trade agreement. The two sides are scheduled to begin the third round of FTA talks in Washington on Thursday, with the past discussions having made little progress.

Experts say Korea needs to go beyond efforts toward expanding outreach to push for more comprehensive and concerted policies to deal with US protectionist measures.

Some raise the need for the country to take a strategic approach to reflect US demands in a more proactive manner while keeping the balance of interests between the two allies.

In this vein, Seoul may have to be more flexible in negotiations on sharing the cost of stationing the 28,500 American troops here. Officials from the two sides last week held their first round of discussions on amending the current cost-sharing accord, which is set to expire at the end of this year.

“The presidential office should take the lead in coordinating broad-sighted approaches to handling a range of pending issues with the US,” said a researcher at a state-run think tank, asking not to be named.