By Bak Se-hwan
Published : Feb 14, 2018 - 12:43       Updated : Feb 15, 2018 - 11:32
Tuesday’s women’s 500-meter short track speedskating final in the PyeongChang Winter Games quickly drew the ire of many South Koreans. The country’s favorite Choi Min-jeong was disqualified from winning the silver medal for interfering with Canadian skater Kim Boutin, who appeared to have done her share as well in pushing Choi away.

“I feel sorry that I failed to meet the support that many fans gave me,” the 19-year old said, crying. “I still have other competitions left, so I will concentrate on them.”

For the country’s Winter Games fans, the ire is not new. 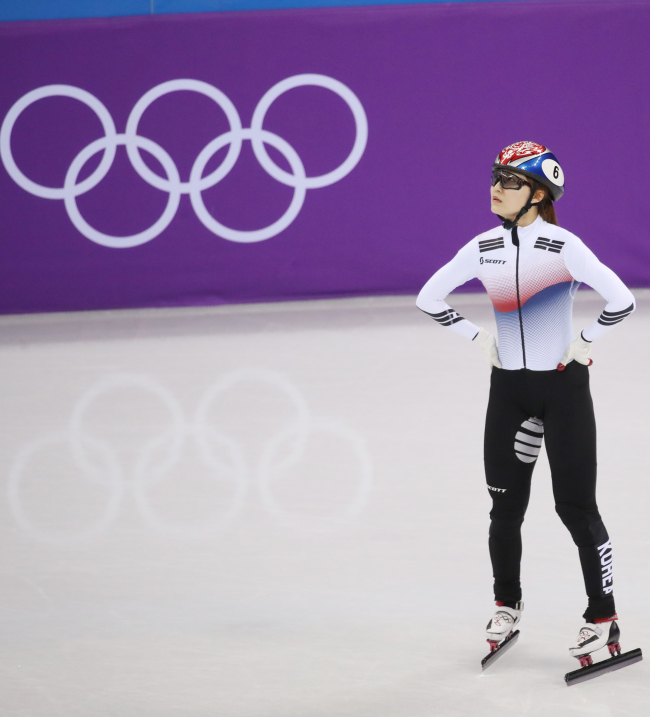 At the 2017 Asian Winter Games in Sapporo, Japan, South Korean short track speedskating star Shim Suk-hee was the victim of a disqualification dispute. During the 500 meters final, China’s Fan Kexin was seen grabbing Shim’s right knee with her left hand during the final lap. Both skaters were disqualified to everyone’s surprise.

In the 1,500-meter final in Salt Lake City 2002, South Korean Kim Dong-sung was also disqualified for cross-tracking and skating in front of another skater, American Apolo Anton Ohno, awarding him the gold.

Kim, who had taken the national flag in his celebration, threw it to the ice and stormed out. The judges’ decision raised a fuss at home and abroad, flooding the US Olympic Committee with so many emails that it shut down its website.

The animosity toward Ohno became so heated that the skater and the entire American short track team in 2003 withdrew from a World Cup event held in Korea, citing death threats.

Also during the 2002 Winter Games, Australian Steven Bradbury won the 1,000-meter final after all four of his rivals in front of him, including Kim and Ohno, crashed in the last lap. In disbelief, Bradbury threw up his arms in joy, winning Australia’s first-ever winter gold medal.

“Skaters should consider every possibility of scenarios for crashes, falling and even of being disqualified in order to win the race,” Chae said. “This is short track.”