Presiding over a debate last month, Moon emphasized the need to take a “revolutionary approach” to lifting regulations, calling for “bold ways that have never been tried until now.”

Critics say, however, his administration’s efforts toward deregulation have been limited to selected new industries it plans to nurture to propel what is described as innovation-driven growth.

Even such narrow endeavors have so far brought no substantial outcome, increasing skepticism about the will and ability of the Moon administration to carry the reforms through.


Work has stalled on introducing a regulatory sandbox, which allows businesses to test innovative products and services in the real market without being hampered by regulations.

Implementing the scheme to promote new industries was included in the 100 key policy agenda unveiled shortly after the Moon administration was launched in May.

Over the past months, no concrete step has been taken toward putting in practice the regulatory sandbox.

Government policymakers and ruling party lawmakers have yet to submit bills needed to introduce it to the parliament.

What has held back the legislation process seems to be difficulties in drawing up bills different from the proposal by the previous conservative administration to set up regulation-free zones around the country. Then in the opposition, the liberal Democratic Party of Korea had vehemently opposed the zones, arguing it would only benefit large corporations.

An official at the Ministry of Strategy and Finance, who had been involved in drafting the bill on establishing regulation-free zones, cautioned against the inefficiency caused by the preoccupation with destroying the legacies of the previous government.

“Policies pursued under the previous administration need to be carried forward, if they are in the right direction,” he said, requesting not to be named.

Many economists and corporate officials say the Moon administration needs to take a more practical and flexible stance on deregulation.

In a forum hosted by the National Economic Advisory Council last week, Park Byung-won, head of the Korea Employers Federation, called for eradicating regulatory restrictions on traditional industries as well, which he said could create more jobs more quickly.

He noted regulatory reforms were required to ensure that local firms can compete internationally.

Except for some high-tech sectors such as semiconductors, Korea’s manufacturing industries have been losing steam in recent years. Factories in the country ran at 71.9 percent on average of full capacity last year, the lowest level since 1998 in the aftermath of a devastating foreign exchange crisis.

Economists say innovation-propelled existing industries rather than new industries have been taking the lead in boosting economic vitality in Germany and Japan.

Lifting regulations on the service sector is all the more necessary as service industries tend to be more instrumental in increasing employment. 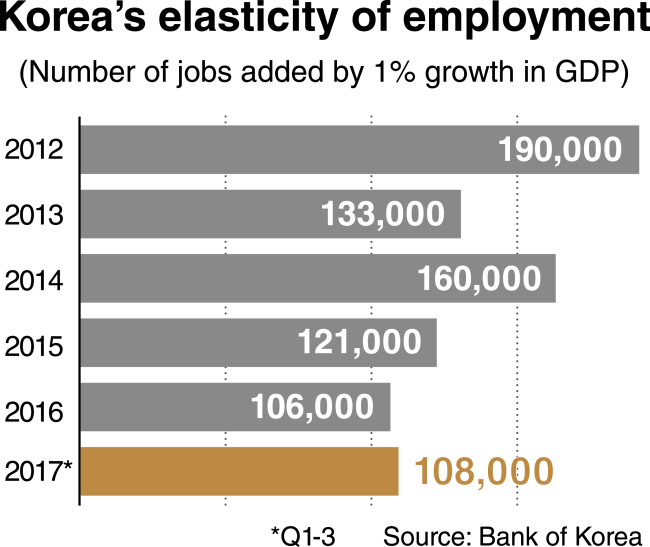 BOK analysts attributed the decline mainly to a slump in the service industries, which have a higher elasticity of employment than manufacturing and construction.

A set of measures aimed at enhancing growth in the service industries, including increased investment in research and development, were announced at a meeting of economy-related ministers last week.

The service sector accounted for only 8.6 percent of Korea’s total R&D spending in 2016, with the corresponding figures for Germany and Japan amounting to 13.2 percent in 2013 and 12.4 percent in 2014, respectively.

But the ministers still stopped short of pushing through drastic deregulation.

They decided to scrap a plan to open a foreign-invested for-profit clinic in an economic free zone in Incheon and permit a local general hospital to be built there.

The decision was seen as a response to pressure from civic groups that had argued the plan would undermine the country’s public health care system.

Economists say the Moon administration’s failure to carry out sweeping regulatory reforms could have a worse than usual effect, because it has pursued a set of pro-labor policies putting heavier burdens on companies as part of its income-led growth drive.

In a seminar hosted by the KEF last week, corporate executives and academics called measures that were excessively biased toward labor groups unnecessary curbs on both companies and workers.

Kim Kang-sik, a professor of business administration at Korea Aerospace University, said this year’s sharp increase in the minimum wage was “the most unnecessary regulation” in the job market, noting the move is pushing firms to cut their payrolls to cope with rising labor costs.

To the embarrassment of the administration that has vowed to put top priority on creating more jobs, recent data from the Labor Ministry showed the number of new applicants for unemployment benefits in the country reached a record high of 152,000 in January, up 32.2 percent from a year earlier.