Korea exposed to fallout from US tax cuts, rate hikes

Last year, Korea raised the tax rate on companies with annual taxable profits of more than 200 billion won ($184.5 million) to 25 percent from 22 percent, whereas a tax overhaul passed by the US Congress last month lowered the maximum corporate tax rate to 21 percent from 35 percent.

Next month is likely to see a US benchmark interest rate exceed Korea’s key interest rate, marking the first rate reversal between the two economies in 11 years.

The US Federal Reserve is expected to raise the federal funds rate by a quarter percentage point to a range of 1.5 percent to 1.75 percent at its policy meeting in March as part of widely expected four rate hikes this year.


The Bank of Korea, which held its benchmark rate steady at 1.5 percent last month, has not yet sent a signal of additional rate increases, trapped in a deepening dilemma over the need and negative effects of raising rates.

A BOK official said last week the central bank’s rate decision would not be made “only by changes in the US monetary policy.”

The reversal of corporate tax rates set to be followed by a rate reversal between Korea and the world’s largest economy has caused concerns over an exodus of local manufacturers and foreign capital out of the country.

In a symposium of economists here earlier this month, Cho Jang-ok, a professor at Sogang University, noted it would likely be high-efficiency and high-tech large firms that might move production to the US down the road.

The second corporate exodus, following an exit of low-efficiency and labor-intensive industries to take advantage of low costs in developing countries, could further weaken the local manufacturing sector.

According to data from Statistics Korea, factories around the country ran at 71.9 percent on average of full capacity last year, the lowest level since 1998 in the aftermath of a devastating foreign exchange crisis. Facility investment decreased 3.1 percent on-quarter in the final three months of 2017, following a 0.4 percent drop in the previous quarter.

A manufacturing business sentiment index compiled by the BOK fell from 82 in November to 77 this month.

A study by the Korea Economic Research Institute, a private think tank, found that the reversal of corporate tax rates in Korea and the US would lead Korea to see its gross domestic product, investments and wages decrease 1.7 percent, 4.9 percent and 0.3 percent, respectively, over a decade through 2027.

The prospect of interest rate reversal between Korea and the US, coupled with moves to tighten monetary policies in major economies, has recently prompted foreign investors to yank their money out of local financial markets.

Foreign investors net sold Korean shares worth more than 1.6 trillion won during the first five trading days in February, erasing their net purchase for the whole month of January.

The outflow of foreign capital is expected to accelerate if the US benchmark rate actually goes higher than the BOK’s base rate. The possibility of price rises bolstered by impressive employment and wage data is seen to outweigh recent stock plunges to lead the US central bank to jack up rates more aggressively. 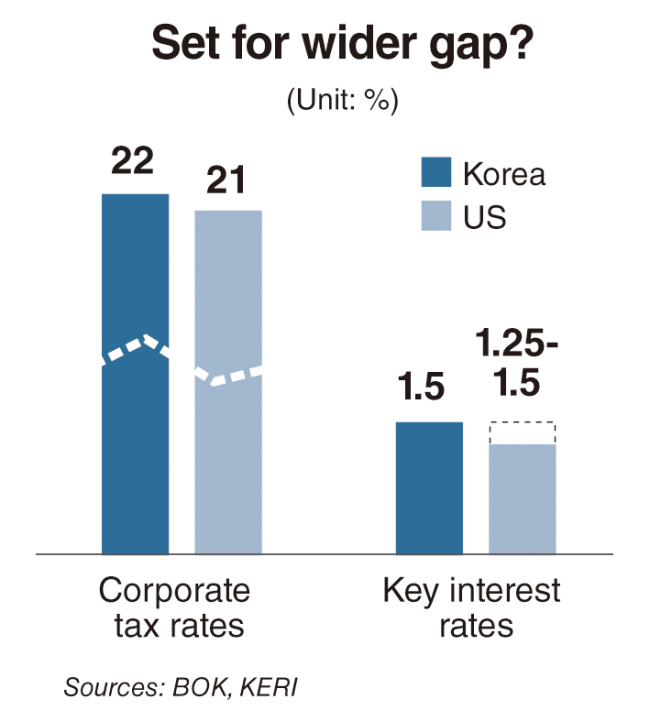 Analysts here say foreign capital flight could spread to the bond market, given most of the bonds bought by foreigners so far this year carry a short-term maturity period.

The BOK, however, remains cautious on additional rate hikes, held back by a set of negative factors, including low inflation.

Consumer prices edged up 1 percent in January from a year earlier, the lowest on-year rise since August 2016.

BOK governor Lee Ju-yeol said last month the upward inflationary pressure would remain weak throughout the year, expecting the annual price hike to be down to 1.7 percent from 1.9 percent last year, continuing to hover below the central bank’s inflation target of 2 percent.

Rate hikes would also increase the burden of debt repayment on households and companies, resulting in reducing consumption and investment.

The country’s household debt exceeded 1,419 trillion won as of September. About 20 percent of local firms have difficulties paying interests with their profits.

“A rate increase by a quarter percentage point might not seem too much, but could have a greater impact on the economy accustomed to a long period of low borrowing costs,” said Lee Bu-hyung, a researcher at the Hyundai Research Institute, a private think tank.

He said it would be more desirable for BOK policymakers to take a prudent approach rather than put heavier burdens on households and small businesses by raising rates in a pre-emptive way.

Analysts forecast the BOK will be pushed to increase its key rate by a quarter percentage point to 1.75 percent in April or May if the Fed’s first rate hike this year comes next month as expected.

After then, however, it will continue to face the thorny task of striking the balance between US rate increases and domestic economic conditions.

In this regard, many economists note President Moon Jae-in and his aides need to reconsider the income-led growth policy imposing heavier burdens on companies to prevent the economy from being further rattled by US rate hikes and corporate tax cuts.