North Korea's art troupe on Wednesday held a rehearsal for its upcoming performances in South Korea, which will celebrate the PyeongChang Winter Olympics.

The 140 member-strong Samjiyon Orchestra traveled to the South by ferry Tuesday to perform in Gangneung, a sub-host city of the Feb. 9-25 Winter Games, on Thursday, and in Seoul on Sunday.

It will be the first performance by North Koreans in the South since 2002, when Pyongyang sent a cohort of 30 singers and dancers from several music and performance groups to Seoul for a joint event. 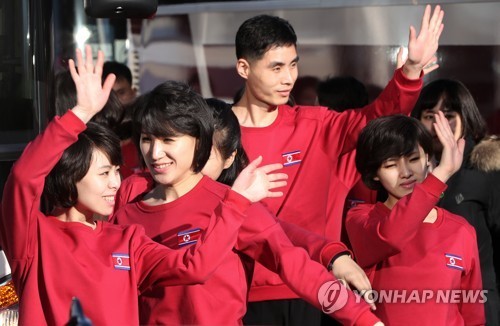 After having lunch in their Mangyongbong-92 ferry, which is docked at the South Korean eastern port of Mukho, the North Koreans showed up at the Gangneung Arts Center, the venue of their first performance, at about 3:40 p.m. on Wednesday in an atmosphere quite different from that of the morning.

They changed to casual attire from the stylish red coats and black fur hats and ankle boots for female members and from black coats and hats for males.

Including its head Hyon Song-wol, the band members were wearing identical comfortable red round-neck t-shirts with a small North Korean flag on the left chest and black pants, apparently for the rehearsal.

They looked nervous and uncomfortable when they first arrived at the arts center in the morning to check instruments and stage equipment for about two hours. When South Korean reporters said "hello" to them at a distance, the members just walked past them without saying a word.

But in the afternoon, some members waved back and smiled brightly to the welcoming reporters with some others responding, "Nice to meet you."

Around 10 residents of the city also shouted, "Nice to meet you" and "We are one," towards the bus of the North Korean art troupe when it was in front of the art center. Some band members waved back.

No conservative activists, who caused a disturbance at Mukho port the previous day, were spotted there. They burned the North Korean flag and a photo of the country's leader, Kim Jong-un, in protest of the North's participation in the Winter Games.

The North's art troupe, which includes an orchestra, dancers and singers, is scheduled to return home after the performances in Gangneung and Seoul.

Later in the day, Chun Hae-sung, South Korea's vice unification minister, paid a visit to the rehearsal site and met with the North's delegation, including Hyon, the Ministry of Unification said.

Chun exchanged words with Hyon and other North Korean officials over the preparation of the planned performances, the ministry said. (Yonhap)