The Minimum Wage Commission, comprising members who represent the government, employers and labor groups, last year agreed on the steep increase, affected by President Moon Jae-in’s campaign pledge to raise the wage floor to 10,000 won by 2020.

At the time, many economists worried the measure would push mostly low-wage employees out of work and cause price hikes, further worsening low-income people’s livelihoods. 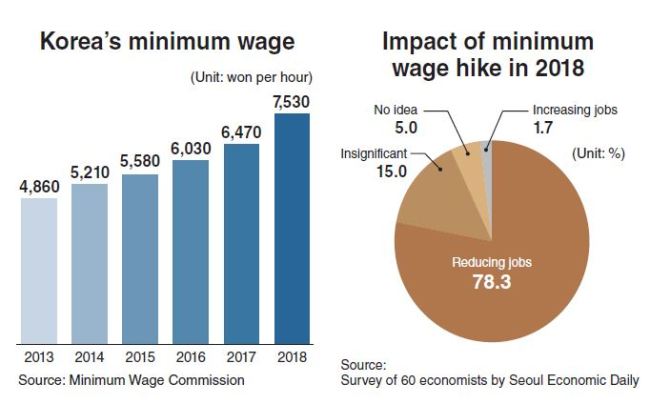 What has since happened seems to vindicate their concerns.

Many self-employed people and small and medium-sized enterprises, which hire most minimum wage workers, have cut their payrolls to stay afloat.

According to data from Statistics Korea, the number of employees at restaurants and accommodating facilities decreased by 2.1 percent, or 49,000, from a year earlier in December, shortly before the application of higher minimum wages.

In the areas of business facilities management and business support services, about 9,000 jobs, equivalent to 0.7 percent of the total, were lost over the cited period.

“Given it usually takes more or less three months after its application for a minimum wage increase to affect the labor market, the job reduction (in December) seems to suggest the impact could be greater this time than ever,” said Keum Jae-ho, a professor at Korea University of Technology and Education.

In a survey of 60 economists here, conducted by a local daily last week, nearly 80 percent forecast the sharp increase in the minimum wage would result in reducing jobs. Fifteen percent saw little impact and 1.7 percent said such a move would increase employment.

One 2016 study analyzed that a 10 percent wage hike would lead to a 0.8 percent reduction in employment. It also noted the jobless rate among workers with low productivity would soar to 31.2 percent if the minimum wage increased 50 percent, while the corresponding figure for highly productive employees would hover around 7.8 percent.

President Moon and his aides have said minimum wage hikes might get some marginalized businesses to reduce jobs for a temporary period, but would eventually result in helping increase employment and reinvigorate the economy.

In his New Year’s address last month, Moon said raising minimum wages would form the foundation of income-led growth by ensuring an acceptable standard of living for all workers and increasing household income.

When the country’s minimum wage rose at double-digit rates five times in the 2000s, unemployment continued to climb for several months before starting to fall to the level seen before the wage increase.

Jang Ha-sung, the presidential chief of staff for policy, apparently kept such previous cases in mind when he told reporters in early January “at least six months should be gone through” before judging the effects of the wage hike.


But economists indicate the Korean economy grew far faster in the 2000s than this year’s growth rate, forecast to be around 3 percent. The rate could be lower if the Moon administration pushes ahead with pro-labor measures set to increase corporate costs and remains reluctant to carry out deregulation across the board.

What is driving employers to cut labor costs more actively is the prospect of minimum wages continuing to rise at a steep pace in the coming years to fulfill Moon’s election pledge.

This concern over continuous wage hikes, coupled with requirements to subscribe to unemployment, health and other forms of insurances for employees, has also held back most businesses from applying for the government subsidy that will be provided this year to help pay increased minimum wages.

Only 1.65 percent of businesses entitled for the subsidy program have made an application so far, covering a mere 1.3 percent of workers who are supposed to benefit from the scheme criticized for improperly using taxpayers’ money.

Keum cautioned the on-year increase in the number of new employees, which hovered below 300,000 for three consecutive months in December, might plunge below 200,000 in the latter half of the year, if the government adheres to a sharp increase in the minimum wage for next year and beyond.

He said the job market would become resilient again only when the administration gave a signal of changing Moon’s election pledge regarding the minimum wage by keeping next year’s increase at around 5 percent.

Alarmed by growing backlashes from self-employed businesses and small firms being pushed over the cliff, some ruling party lawmakers have recently raised the need to readjust the pace of pushing up the wage floor.

Economists also call for including bonuses and various forms of allowances in calculating the minimum wage, saying the measure would barely reduce earnings of most low-wage employees not receiving them and narrow the gap in salaries between workers at large and small companies.