[Weekender] Make the most of Korea: Plot your own course

“Those who end up being fans (of Korean culture) would definitely dream of visiting Korea,” she said. “I became a K-pop fan in high school, and since getting a job, saved hard to finally come to Korea.”

Galvez journeyed across Korea in search of off-the-beaten path locations and arty spots where movies and TV dramas had been filmed.

“South Korea will always be my favorite place to visit,” Galvez told The Korea Herald. “I can never get enough of it. It has changed so much over the past few years, yet it feels weirdly comforting and familiar.”

They also didn’t forget to try on Korea’s traditional costume hanbok for a photo op. The sisters also walked the famous tree-lined paths of Nami Island and nearby Garden of Morning Calm in Gapyeong, Gyeonggi Province, the backdrop of “Love in the Moonlight,” which starred Park Bo-gum.

Galvez, who works as a digital marketing specialist in Makati, nearby the Philippine capital Manila, described Korea’s landscape as “incredibly different” from what can be seen in Southeast Asia. She said its distinct four seasons were a major pull factor for travelers from the region, many of whom choose destinations offering cold weather.

“Though I know there are countries with amazing beaches and islands like Indonesia or Thailand, I’d rather visit them in the Philippines,” Galvez said. “So for an international trip, I prefer going to countries with four seasons. I can confidently say that many Filipinos feel the same. And since Korea has amazing four seasons and the visa requirements are not as strict as other countries, it is on the top list for many Filipino travelers.” 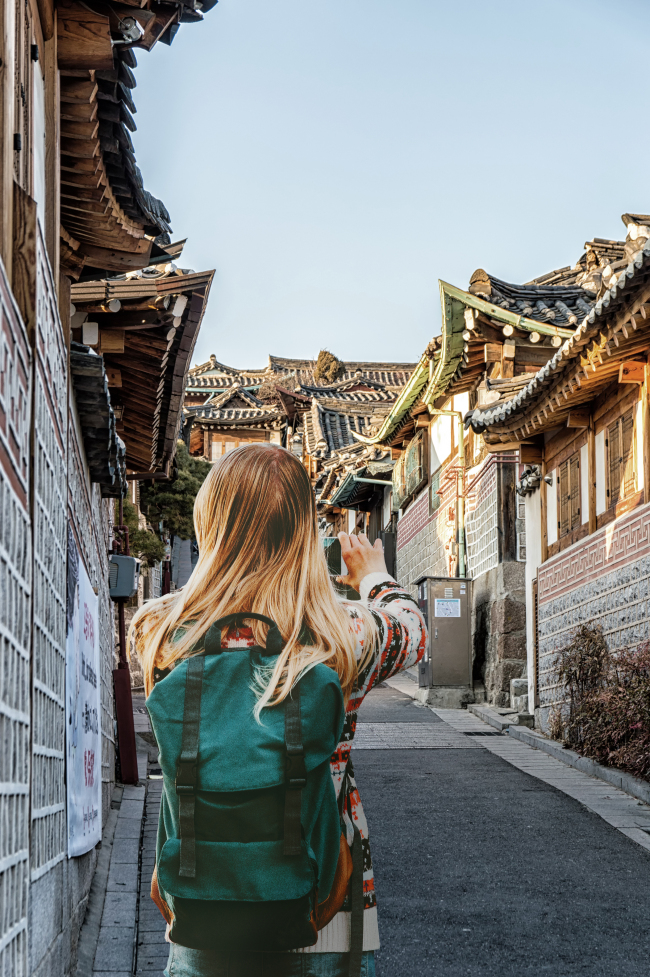 Aided by online marketing and social media, more and more tourists are customizing their itineraries and traveling independently worldwide.

The number of inbound foreign tourists to Korea has taken a hit from China’s de facto ban on group tours to Korea following a row over the country’s installation of a US anti-missile system. Still, 12.2 million traveled here from January through November 2017, according to the Korea Tourism Organization. The trend stands in stark contrast to the growing number of outbound Koreans, which recorded 24.1 million during the same period.

Galvez noted that many Southeast Asians are fervid fans of K-pop and other aspects of Korean pop culture, collectively known as Hallyu.

“Those who end up being fans (of Korean culture) would definitely dream of visiting Korea,” she said. “I became a K-pop fan in high school, and since getting a job, saved hard to finally come to Korea. Personally, I like to go to locations where Korean dramas were shot.”

Southeast Asians often travel on a budget, she pointed out, noting the cost of living is much lower there than in Korea. Sites offering discounts and coupons are becoming increasingly popular, with users keenly using information online and downloadable mobile travel applications.

“More and more people feel comfortable traveling on their own with tailored itineraries rather than joining group tours,” she said.

While conceding it was sometimes difficult to communicate with locals in English in Korea, Galvez pointed to several other positives, among them tourist-friendly signs, abundant information centers and English announcements on buses and trains.

Becki Enright, a British travel writer and public relations consultant in Vienna, was less enthralled with her three-week trip across Korea in 2013. A globetrotter who has been to over 60 countries, Enright was the winning writer of the British Travel Press Award in 2013 and is currently the United Kingdom Ambassador for Austria Tourism.

“Except for a few days, I realized I wasn’t feeling much for Korea at all -- and that rarely happens,” Enright wrote on her website, www.bordersofadventure.com. “Overall, Seoul wasn’t a city that really excited me like Tokyo or Beijing did, or which kept me on my toes like Phnom Penh or Yangon. It lacked a certain buzz which I thrive on in Asian cities. Korea remains a country that people do not extensively ‘travel’ in outside the capital of Seoul and port city of Busan.”

Finding places to explore outside Seoul and Busan was rather difficult, she told The Korea Herald, adding those attractions recommended by the locals “may not necessarily be interesting from a visitor’s perspective.”

Enright takes pains to explain South Korea’s rapid economic growth out of the ashes of the Korean War on her blog. As a result of a growth-focused utilitarian mentality, Koreans at times can appear “cold,” “closed-minded” and “can brush you aside before you’ve barely finished a sentence,” she observes.

On a more rudimental level, “Tourism isn’t a lifeline like it is in Thailand or Cambodia,” she adds. “So welcoming tourists with open arms is not something that will come naturally.”

However, the Briton lauds several of the country’s tourist highlights, including picturesque Jeju Island and the historical Gyeongju.

“A key part of enjoying Korea is knowing people who live there,” Enright says. “With friends, determination, context and an open mind, I made the most of what I had.”

As for advice for the country desperately trying to promote its tourism riches, she says, “Shout about what you have. While it might not be in abundance compared to your neighbors, it’s there. We just don’t really know about it. A clever marketing campaign would work wonders.”