[PyeongChang 2018] Cartoon exhibition for PyeongChang kicks off Wednesday in LA

The exhibition opens in Los Angeles on Wednesday, both at the LA Convention Center and LA Korean Cultural Center. 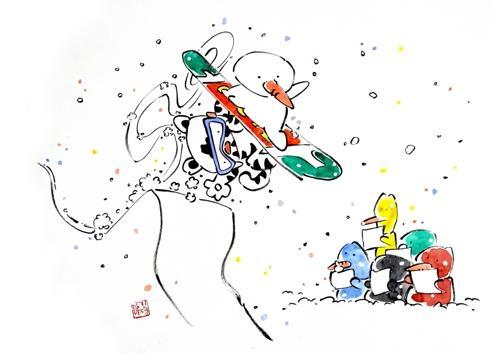 "Fantasy of Snowland" (Photo courtesy of the LA Korean Cultural Center-Yonhap)
The LA Convention Center is opening an exhibition titled “Cartoon meets PyeongChang” through Sunday. The exhibition will show 25 cartoon pieces including eight web-based comics that depict participants in the Winter Games.

From Thursday to Saturday, comics artist Kim Jung-gi will do a live drawing performance on a special stage next to the exhibition hall. The convention center is currently holding the 23rd LA Art Show as well.

At the LA Korean Cultural Center, an exhibit will be held through March 18, when the Paralympic Games are set to end.

Aside from cartoons, the exhibition will also show visitors Olympic slogans, emblems, locations of Olympic stadiums and the history of Gangwon Province, where PyeongChang is located.