In terms of service sector competitiveness, the country remains near the bottom among member states of the Organization for Economic Cooperation and Development.

Asia’s fourth-largest economy saw its service account deficits expand from $14.9 billion in 2015 to $17.6 billion last year. The figure reached $15.7 billion in the first half of this year. 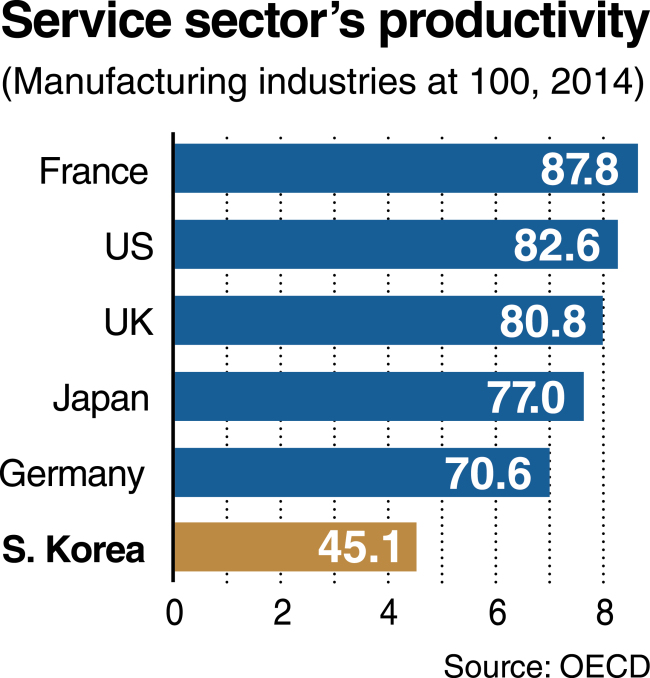 Korea recorded deficits in transportation for the first time last year, with deficits in tourism and business services continuing to grow.

The growth rate fell below the country’s overall economic growth rate at 2.8 percent last year after having been at par with it in the previous two years.

The gap is expected to widen this year as Korea’s gross domestic product is forecast to expand slightly over 3 percent mainly due to brisk exports of manufactured goods, particularly semiconductors.

With the country’s manufacturing exporters facing mounting protectionism and intensifying competition in overseas markets, Korea should take bolder steps to promote its service sector and other innovative industries, economists say.

“Tariff rates have been lowered in major economies, but nontariff barriers have only increased across the globe,” said Hyun Jung-taek, head of the Korea Institute for International Economic Policy, a state-run think tank, in a seminar last week.

He noted the number of additional trade restrictions imposed worldwide soared from 267 in 2010 to 855 in 2016.

Except for semiconductors, which have propelled Korea’s exports in recent years, the country’s major manufacturing industries have been losing competitiveness abroad, particularly against Chinese rivals.

A heavy reliance on semiconductors raises concerns a possible slowdown in the industry could deal a severe blow to the Korean economy.


A recent report from the Korea Institute for Industrial Economics and Trade, a state-run think tank, forecast that outbound shipments of semiconductors is projected to grow 22.9 percent next year, down from 55.6 percent this year. But challenges from China is expected to intensify as it is pushing for the construction of 15 semiconductor factories over the years through 2019, compared to three in Korea.

According to data from Statistics Korea, the youth unemployment rate reached 9.2 percent in November, the highest for the month in 18 years. The figure was embarrassing for President Moon Jae-in’s administration, which has prioritized creating more jobs since it was launched in May.

Research by the Bank of Korea showed the number of jobs per 1 billion won ($927,000) in GDP amounted to 28.1 in educational services and 24.8 in business services, compared to 10.6 in manufacturing.

But the service sector’s proportion of GDP remained at 59.2 percent in Korea, far below the OECD average of 70.8 percent.

The sluggishness in Korea’s service industries is attributed mainly to regulatory policies and insufficient investments.

An OECD report released last year indicated that in Korea, the service sector is subject to more than four times regulatory restrictions than manufacturing industries.

According to the Korea Economic Research Institute, a private think tank, service industries accounted for 8.1 percent of research and development investments made by private companies here in 2015, the lowest among OECD member states surveyed. The corresponding figures stood at 58.2 percent for the UK, 29.5 percent for the US and 12.4 percent for Japan.

The Moon administration has done little to boost the tertiary sector, dragging its feet on pushing for the enactment of a bill introduced by the previous government to promote the development of service industries.

The economic policy directions for next year, which will be unveiled this week, are expected to make little mention of how to boost the service sector, except for plans to create new business models based on artificial intelligence and Internet of Things technologies.

Hyun, the KIEP head, noted it is needed to introduce regulatory sandboxes in a wider range of areas to enable businesses to test innovative technologies and services.

Government policymakers admit more than half of the world’s 100 major startup business models cannot be put into practice in Korea now due to a complex set of regulations.

Objections from vested interest groups have also thwarted efforts by the government to innovate in the service sector.

Plans to increase the number of medical doctors and lower barriers between lawyers and other professionals have been blocked for years by local medical and bar associations.

Different positions between government agencies have also hampered measures to lift regulations in the service sector.

The Moon administration is considering setting up a committee comprised of civic representatives under the Prime Minister’s Office to decide whether to push for innovative measures in the service sector over objections from interested groups.

Critics say this approach would prove ineffective and controversial, deserting the government’s responsibility.