Ranking members from ruling and opposition parties at a parliamentary committee last month agreed on a draft revision to the labor law to reduce the maximum workweek from 68 hours to 52 hours in three stages depending on company size. But the revised law would leave additional pay for holiday work unchanged at 50 percent of the wages for weekday work.

The parliamentary passage of the revision bill has since been delayed due to a demand from some ruling party lawmakers that the extra pay be doubled.

Business organizations, on their part, remain split on whether to accept the parliamentary proposal.

Park Yong-man, chairman of the Korea Chamber of Commerce and Industry, met with key members of the parliamentary labor committee last week to call for the early approval of the bill.

He said it is important to enact the bill as soon as possible to settle the prolonged confusion over workweek reduction, while conceding it will not be easy to persuade all businesses to embrace what has been worked out by the parliamentary committee.

The Korea Federation of Small and Medium-Sized Enterprises and the Korea Employers Federation have decried the draft revision to the labor act, which they worry would inflict unendurable damage on most SMEs.

They criticize the KCCI for acting without prior consultation with other business lobbies and lacking correct understanding of the reality faced by small and mid-sized firms around the country.

A reduction in work hours coupled with planned minimum wage increases is set to particularly weigh on SMEs in the manufacturing sector, which are suffering from labor shortages and low productivity.

“If the workweek is reduced as planned, small and mid-sized companies would need an additional 440,000 workers,” said Lee Heung-woo, vice chairman of the federation of SMEs.

According to a study by the Korea Economic Research Institute, a private think tank, cutting the maximum workweek from 68 hours to 52 hours -- 40 regular work hours and 12 hours in overtime -- would incur 12 trillion won ($10.9 billion) in additional corporate costs. More than two-thirds of the sum was estimated to be shouldered by companies with less than 300 employees. 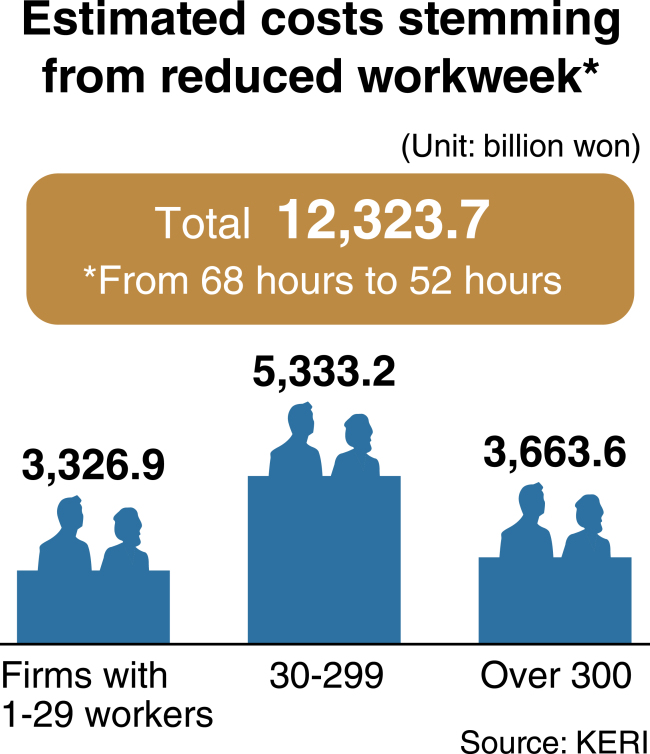 A recent forum attended by hundreds of SME executives to discuss innovative strategies turned into a stage for lambasting the move to reduce work hours.

For them, an announcement by the country’s retail giant Shinsegae last week to introduce a 35-hour workweek for its employees without cutting wages might have seemed out of the question.

Small and mid-sized businesses want holiday work pay to be unchanged and work hours to be reduced in a more gradual way than agreed on by lawmakers.

The draft revision calls for reduced workweek to be put in practice for companies with more than 300 workers in July 2018, firms with 50-299 employees in January 2020 and those with 5-49 employees in July 2021.

SMEs want the implementation schedules to be pushed back by six months to 1 1/2 years. They call for deciding whether to apply reduced workweek to smaller companies that hire 5-19 workers after a scrutiny into their conditions.

Park, the KCCI head, has been trying to win an early enactment of the labor law revision bill before the Supreme Court gives a ruling on whether holiday work should be regarded as part of overtime possibly early next year.

A verdict to that effect would result in applying the 52-hour workweek to all companies immediately regardless of the number of their employees.

Changing the administrative interpretation of a provision on the workweek in the labor act could also have the effect of reducing the maximum work hours per week to 52 hours.

During a meeting with his aides in October, President Moon Jae-in suggested considering taking the measure if the revision bill fails to pass through parliament.

The reduction in work hours will follow an earlier decision by a commission comprising representatives from the government and labor and management circles to increase the minimum wage by 16.4 percent from this year to 7,530 won in 2018.

It is Moon’s hope that reduced work hours coupled with minimum wage increases would create more jobs by increased consumer spending from higher income for employees and enhanced compatibility between work and family life.

A report from the Organization for Economic Cooperation and Development showed the average Korean worker worked 2,069 hours last year, far above the 35 OECD member states’ average of 1,764 hours.

But concerns are growing that Moon’s labor-friendly policies might bring more difficulties to workers as well as their employers unless it was pursued at a proper pace and accompanied by substantial efforts to improve labor productivity.

A recent study by the Korea Productivity Center showed the country ranked 28th among 35 OECD members in labor productivity in 2015.

The productivity gap between large firms and SMEs was wider in Korea than any other major economies. The KPC study found SMEs’ productivity remained at 29.5 percent of large companies’ in the country in 2013, the lowest among 24 OECD members surveyed.

Kim Young-wan, a KEF official, said the application of reduced workweek should take into account different conditions faced by companies and industries.

“Work to enhance employment flexibility needs to be done in the first place,” he noted.

The Moon administration has backpedaled on the task, ditching measures adopted by the previous administration last year to make layoffs and changes to working conditions easier.