The company announced Friday that this year‘s newest, limited Ryan doll is now sold out. Its price tag was 59,000 won ($52) per doll.

Consumers raved about the doll’s cuteness as it comes with a red or navy long, padded coat, thus calling Winter Ryan the “Padded jacket Ryan.” 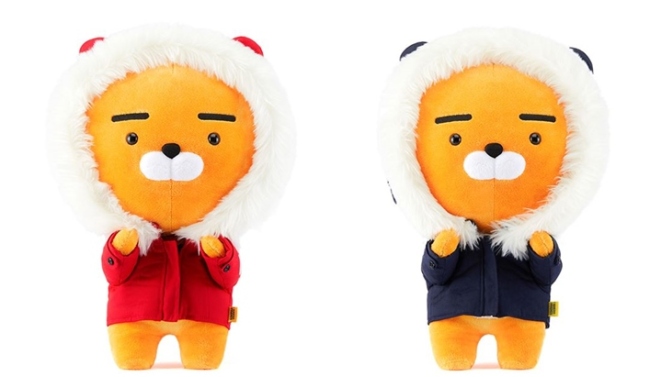 "Winter Ryan" in red or navy padded coat(Kakao Friends)
It may be far-fetched to describe Ryan’s outerwear as a long, padded jacket. Citizens, however, went so far to call it long, padded jackets, making close associations with Lotte Department Store’s PyeongChang Coat.

The company reported that sales for Winter Ryan, donning the red padded coat, proved to be more popular than Ryan in navy.

For consumers wondering about the doll, one online commenter posted pictures of the purchased Winter Ryan and showed that the coat can be put on or taken off the doll.

Citizens expressed differing views on Kakao Friend‘s limited product. Some criticized that Ryan is shown “naked, without pants” and questioned the “purpose of the padded coat,” while others only showed curiosity regarding the coat.

Kakao Friends had launched sales of limited edition “Santa Ryan” in 2016 and tasted yet another huge success with “Winter Ryan” this year.