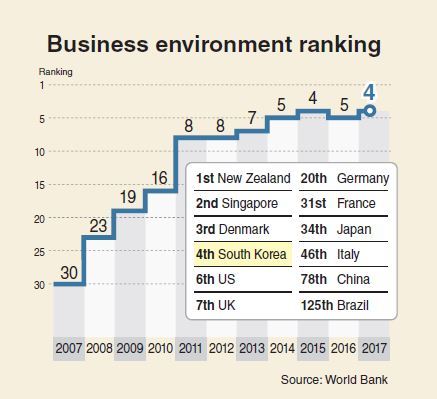 South Korea moved up to fourth place in this year’s business environment survey by the World Bank, mainly due to high scores in legal settlements and electricity supply.

The organization’s “Doing Business 2018” report comprising the annual survey showed that South Korea moved one notch up from the previous year.

The business environments of 190 countries were surveyed in 10 broad categories in accordance with the business life cycle from start to closure.

South Korea remained in fifth in dealing with insolvency, while ranking at ninth in environment for starting a business.

South Korea’s poorer rankings were in dealing construction permits (28th), getting credit and administrative procedures on cross-border trading (33rd), and in terms of corporate financing (55th).