The possible easing of China’s economic retaliation against South Korea over the latter’s hosting of a US anti-missile system could not mask fundamental challenges facing them in the Chinese market.

Guarded optimism has been raised here that Beijing will ease retaliatory measures following last week’s closure of the 19th congress of the Chinese communist party, in which Xi cemented his grip on power.


Some Chinese travel agencies are moving to resume the sale of South Korea-bound tour packages.

Since March, Beijing has banned local travel agencies from selling tour programs bound to South Korea in the wake of the initial installation of the Terminal High Altitude Area Defense system here.

The number of Chinese tourists to South Korea declined 56 percent on-year to 318,000 last month, according to figures from the Korea Tourism Organization.

Beijing’s retaliation over the THAAD deployment, which has hit South Korean companies particularly in tourism, retail, cosmetics and auto sectors, is estimated to have so far caused economic damages worth more than $12 billion to the country. 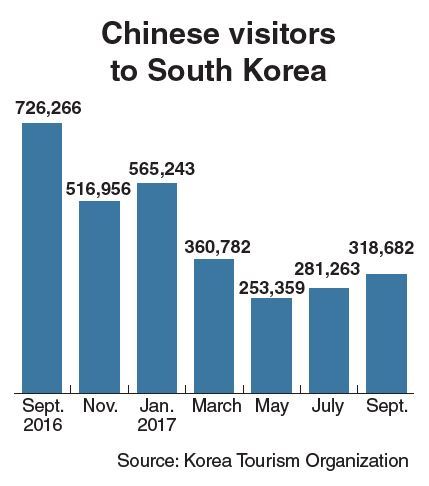 Along with the signs of easing tour restrictions, a South Korean actor has been selected as the cover model of the November issue of a popular Chinese magazine, raising hopes China will be reopened to South Korean entertainment and cultural contents.

The country’s food, fashion and cosmetics companies have recently been recovering lost sales in the Chinese market.

On the back of the upbeat mood, share prices of South Korean companies heavily affected by China’s economic reprisals have risen more than 20 percent on average over the past month.

Caution has still been raised against the hasty expectation of China’s moves to roll back retaliatory measures.

Tourism industry officials say it has yet to be seen whether Beijing will lift a ban on group tours to South Korea.

The country’s automakers, airlines and electric car battery manufacturers have seen no improved conditions in their business with China.

The Chinese government has continued to exclude electric vehicles equipped with batteries made by South Korean companies from state subsidies.

Seoul and Beijing have been working towards a proper way out of the THAAD dispute to lay the groundwork for a possible meeting between Moon and Xi on the sidelines of the Asia-Pacific Economic Cooperation summit to be held in Da Nang, Vietnam, next week.

The meeting is expected to be followed by Moon’s visit to China in December. Seoul officials hope the visit will be reciprocated by Xi’s trip here to attend the opening ceremony of the 2018 PyeongChang Winter Olympics.

An aide to Moon last week denied reports that Beijing had demanded Seoul express regrets over the THAAD deployment as a precondition to holding a summit between the South Korean and Chinese leaders.

It will be difficult to find a diplomatic tone that will temper Beijing’s possible demand for apology while also addressing the damages inflicted by its economic retaliation on South Korean businesses.

“China seems to have judged that relations with South Korea cannot be allowed to continue to remain as it is,” said Lee Se-ki, head of the Korea-China Friendship Association.

He said Beijing would still take a gradual approach rather than hastening to solve the strain over the THAAD issue.

Experts here say South Korean firms need to look beyond the possible easing or settlement of the THAAD dispute and step up efforts to cope with changes to be brought about by Xi’s policy focused on sophisticating the Chinese economy.

They note the country’s firms should try to enhance technological competitiveness to export more value-added products to the world’s second largest economy and go ahead of Chinese rivals in global markets.

China has already caught up with South Korea in traditional industries such as steel, petrochemicals and shipbuilding, while increasing investments in high-tech sectors.

“Now, the technological gap between South Korea and China is too close to be discerned in most areas,” said Lee Hang-koo, a researcher at the Korea Institute for Industrial Economics & Trade, a state-run think tank.

Under this circumstance, the government needs to strengthen measures to help boost the competitiveness of local companies through sweeping deregulation and tax relief, he said.