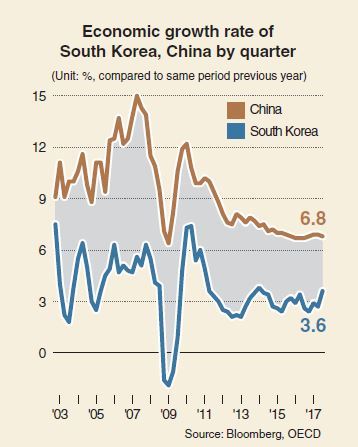 South Korea has logged a better-than-expected economic growth rate of 3.6 percent in the third quarter this year on-year, marking the highest index in three years and six months, according to Bank of Korea.

Particularly in comparison with the growth rate of China, the gap between the two indices has become the smallest in 15 years, statistics gathered by Bloomberg showed, as China’s economy enters the “new normal” state, shifting from high-speed growth.

Experts, however, noted that the smaller gap may be temporary from immediate expansion in investment such as through the supplementary budget.