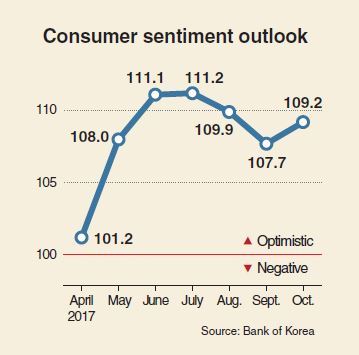 Amid easing political tensions between Washington and Pyeongyang, South Korea’s consumer sentiment figures have rebounded in October, according to a survey by the Bank of Korea on Friday.

The composite consumer sentiment index for October climbed to 109.2, marking a 1.5-point increase compared to September, the data shows. A reading above 100 means that more companies are expressing optimism over negative sentiments.

During June and July, the index reached 111.1 and 111.2, respectively. However, North Korea‘s series of ballistic missile tests led to a spike in geopolitical tensions, which the BOK attributed to the previous slump in consumer sentiment. In August the index fell to 109.9.

The Central Bank’s data results is based on a survey of 2,020 households nationwide from Oct. 13-20.