As a result, the country’s state-run energy and resources firms have shown a pattern of acquiring overseas oil rigs and mining fields at high prices and disposing of them at low prices.


Over the past several years, Korea has swung from an aggressive push for overseas resources development to a hasty withdrawal from it.

Under the administration of former President Lee Myung-bak, who served for five years from 2008, state-run companies were encouraged to increase investments in developing energy and mineral resources abroad.

The Lee administration came under criticism for pushing ahead with overseas projects in a reckless way without giving thorough consideration to economic viability.

Lowering international commodity prices have also increased losses on investments in such projects.

The drive for overseas resources development was pushed aside by the government under Lee’s successor, Park Geun-hye.

The country’s investments in projects to develop resources abroad shrank from $11.46 billion in 2011 to $2.78 billion last year, according to data from the Ministry of Trade, Industry and Energy.

The number of new resources development projects undertaken by local firms also decreased from 71 in 2011 to 10 in 2016.

By contrast, China and Japan were estimated to have expanded their investments in developing overseas resources from $71.44 billion and $49.74 billion to $82.35 billion and $106.94 billion, respectively, over the cited period, according to research organizations, including the American Enterprise Institute.

China and Japan saw the fall in commodity prices over the past years as an opportunity to secure resources abroad at lower prices, while Korea slashed investments. 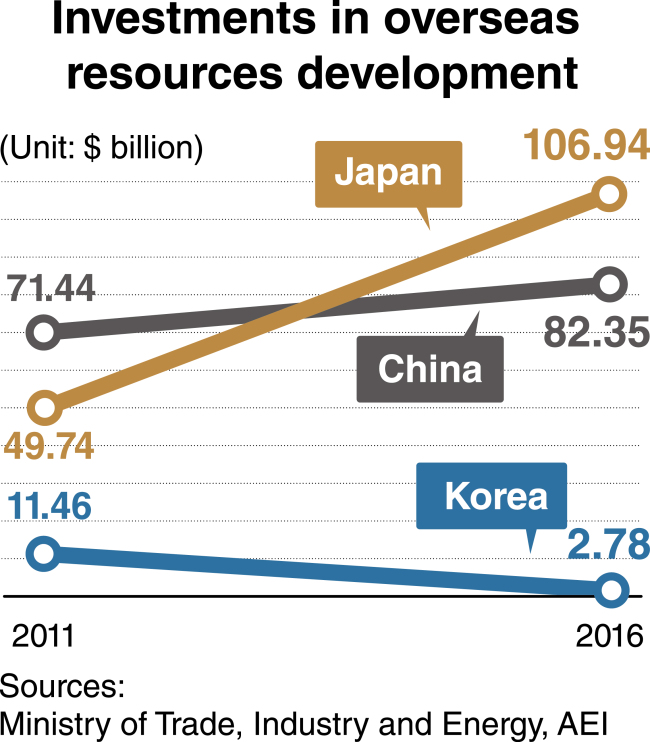 Overseas resources development projects are expected to be further scaled back under President Moon Jae-in’s administration, which has been preoccupied with eradicating what it sees as problems aggregated from the two previous governments.

Experts say the policy on overseas resources development should be pursued consistently from the long-term perspective, not affected by the change of government.

“Previous mistakes should not be allowed to justify cheap sell-offs and the indiscriminate suspension of resources development projects abroad,” said Park Maeng-eon, a professor of environmental and geological sciences at Pukyong National University.

Criticism of overseas resources development projects has been fueled by the low rate of return on investments.

The country’s state-run firms had poured $38.85 billion into resources development projects abroad as of end-2016, recouping a little over one-third of their investments, according to a Trade Ministry report recently submitted to the parliament.

The return rate at 36.7 percent was less than half of that for private companies, which had collected 74.8 percent of their investments that amounted to $35.78 billion at the end of last year.

Korea Resources Corp. invested $4.36 billion in 32 overseas projects, which earned them an average return of 9.7 percent.

Korea Gas Corp. and Korea National Oil Corp. recouped 19 percent and 46.2 percent of their investments at $10.42 billion and $20.86 billion, respectively.

Experts caution against abandoning overseas projects based on the current rate of return, as it takes at least a decade before an ultimate judgment can be made on their economic viability.

Shin Hyun-don, a professor of energy resources engineering at Inha University, said it is necessary to set up a system to enhance competitiveness by accumulating technology and capital in the long term, noting the possibility of succeeding in overseas resources development projects hovers around 10-15 percent.

KORES, the state-run mineral resources development company, undertook a project to develop a lithium mine in Bolivia in 2009, signing a memorandum of understanding with the government of the South American country.

But the project was aborted in 2015 amid growing skepticism here of overseas resources development projects. Bolivia signed a contract with a Chinese company to replace KORES.

Over the past two years, the price of lithium, a key material needed to make electric vehicle batteries, has more than tripled to exceed $21 per kilogram in keeping with a continuous increase in electric car production.

Prices of cobalt and nickel, other materials used in manufacturing electric car batteries, have also soared.

“We are now in no position to invest in developing mineral resources abroad,” said an official at KORES, asking not to be named. The company has not undertaken a new overseas project for years.

Experts also note state-run companies need to be made less responsible for failures in overseas projects, though corruption and any other wrongdoing involving them should be subject to legal punishment.

Last month, a local appeals court upheld a lower court’s acquittal of a former KORES head of causing losses to the state by making unsuccessful investments in mining projects.

The investments were “managerial decisions, which are not something to be judged by the law,” said the Seoul High Court.