Blindly pursuing weapons of mass destruction, North Korea is facing further isolation from the outside world, as a growing number of nations are declaring Pyongyang’s ambassadors and officials “persona non grata.”

Spain on Monday decided to expel North Korea’s ambassador on the reclusive nation’s unwillingness to halt its nuclear and missile provocations. The envoy, Kim Hyok-chol, is to leave by the end of this month. 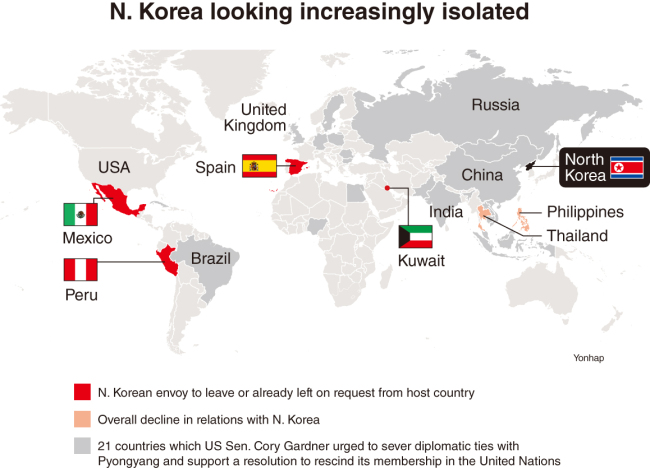 The move, which came after the North’s sixth nuclear test with a follow-up missile launch in blatant defiance of the United Nations-led sanctions and warnings, marks the fourth of its kind among the international community and first among the members of the European Union.

Spain is the latest addition to a list of countries that have taken punitive steps against North Korea, in line with the recently adopted UN sanctions.

On Sept. 8, Mexico told the North Korean envoy there to vacate its Mexico City embassy within 72 hours. The North American nation, which shares a border with the US, called Pyongyang’s nuclear activity “a serious risk for peace and international security.”

Peru has taken the steps to drive out Pyongyang’s diplomatic representatives there on Sept. 4 after issuing a statement in July that it would commit to the UNSC resolution passed at the end of 2016 which limits the number of North Korean employees at diplomatic missions and consular posts.

In the Middle East, Kuwait followed suit on Sunday by passing down the same order on the North Korean ambassador and four other diplomats there.

In addition, the Gulf state will stop issuing visas to North Korean citizens and suspend all air routes between the two countries.

On par with the efforts to scale down North Korea’s diplomatic presence, signs of more bold movements to undermine the North’s economic growth are appearing as well.

Vietnam has asked a North Korean official in charge of operating a branch of the North’s Tanchon Commercial Bank there, to leave the country, diplomatic sources told Yonhap News Agency Monday.

The official named Kim Dong-ho had been among the 14 North Koreans blacklisted by the UNSC’s June resolution while the bank was suspected as a key entity involved in illicit arms sales and money laundering for Pyongyang’s weapons program. Kim Dong-ho reportedly returned to his homeland in mid-July.

North Korea’s longtime allies in Africa such as Uganda and Egypt are maintaining diplomatic ties, but decided to put an end to its military cooperation with the North last year.

Washington is currently taking note of the latest diplomatic “chain-reaction” with US Ambassador to the UN Nikki Haley calling the recent impact of the sanctions “dramatic,” during a White House press briefing on Sept. 15, alongside US National Security Adviser H.R. McMaster.

Seoul’s Foreign Ministry said it is also aware of the situation and perceives it as a show of intolerance against North Korea’s nuclear drive and a strong warning against North’s ongoing provocation and threats.

Washington is expected to further fuel the movement with a letter addressed to ambassadors from China and 20 other countries urging the respective nations to immediately cut off all relations with North Korea and consider suspension of the North’s UN membership.

“Maintaining official diplomatic relations with a regime that continues to defy international law and threaten nations across the globe only serves to reward nefarious behavior,” wrote US Republican Senator Cory Gardner, the chairman of US Senate’s East Asia subcommittee, according to Reuters on Tuesday.

North Korea currently holds diplomatic relations with 160 countries along with missions in Moscow and Beijing and embassies in London, Rome, Stockholm and Berlin, according to South Korea’s Unification Ministry.