As of 2015, 46.8 percent of workers in the country paid no tax for their earned incomes, according to data from the National Tax Service. The figure was far higher than 15.8 percent in Japan, 19.8 percent in Germany, 23.1 percent in Australia and 35 percent in the US.

A study by a local research institute forecast that a 10 percentage point cut in the proportion would result in bringing 1.2 trillion won ($1.06 billion) in additional revenues annually.

The government-proposed tax code revision, which would raise rates applied to wealthy individuals and large profitable companies, included no measures to expand the pool of tax-paying workers.

It is expected to enable tax authorities to collect 6.27 trillion won more annually from 93,000 people and 129 firms that are subject to maximum income and corporate tax rates.

The net increase in annual revenues is projected to reach 5.47 trillion won, given additional tax credits worth 800 billion won are to be provided to working families and small businesses.

The sum looks insignificant, compared to 178 trillion won needed to finance Moon’s programs to expand welfare benefits and create a massive number of public-sector jobs over the coming five years.

His administration plans to secure some 60 trillion won in what it hopes will be a natural increase in tax revenues and 95.4 trillion won through the readjustment of fiscal expenditures.

But critics say the government’s funding plan seems too optimistic. 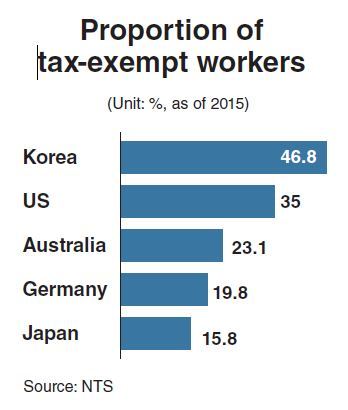 Government officials forecast national revenues will grow by an annual average of 4.5 percent during the period between 2016 and 2020, but research by the National Assembly Budget Office estimated the growth rate to be around 3.9 percent.

Scrapping and merging a wide range of fiscal projects in 2015 resulted in saving a mere 76.6 billion won.

Moon’s pledge not to increase the burden on working families and small and medium-sized enterprises limited the scope for expanding the tax base in the draft tax code amendment.

“It is a fundamental principle for every citizen benefiting from public services to pay any amount of taxes,” said Song Won-geun, vice president of the Korea Economic Research Institute, a private think tank.

He said it would go against the principle to further raise highly progressive rates imposed on high-income earners and large profitable firms while leaving nearly half of workers and businesses exempt from tax payment.

Korea’s maximum income tax rate at 40 percent, which would rise to 42 percent next year under the revised tax code, is far above the 35.8 percent average for mostly rich member states of the Organization for Economic Cooperation and Development.

Less than 6 percent of income earners paid 76 percent of total income taxes in the country in 2015. Nearly 880,000 workers who earned more than 30 million won in the year were exempt from paying taxes.

This distorted structure of taxation is partly attributable to Korea’s relatively low ratio of tax to gross domestic product. The country is expected to see the ratio reach a record high of 19.7 percent this year. The figure is still far below the OECD average of 25.1 percent in 2015.

Some experts suspect the proposed tax code revision has been politically motivated to serve the liberal ruling party’s effort to win voters’ favor in the run-up to next year’s elections for local administrative heads and council members.

Kim Won-shik, professor of economics at Konkuk University, said the draft revision would be of little help for increasing taxes and would worsen the country’s fiscal conditions.

Experts say a more balanced and reasonable scheme should be worked out through upcoming parliamentary deliberations on the proposed revision and debates on a special committee tasked with taxation and fiscal reforms, which is set to be launched later this year.

If tax increases are needed to settle or ease economic and social polarization of the country, the focus should be put on expanding the tax base in accordance to the principle of universal taxation, they note.

“Calls for more tax burden on the rich could sound more persuasive when the taxation system is established to ensure all people make their own contributions,” said Jeong Hae-bang, professor at Konkuk University School of Law, who formerly served as a senior state budget planner.

Many say the proportion of tax-exempt workers needs to be lowered below 30 percent by reducing or scrapping a range of tax credits.

Caution is also raised against the proposal to raise the maximum corporate tax rate from the current 22 percent to 25 percent in a move against the global trend. The OECD average, which stood at 34 percent in 2000, continued to decrease to 22 percent last year.