By Hong Dam-young
Published : Jul 26, 2017 - 09:20       Updated : Jul 26, 2017 - 09:20
The Corea Image Communication Institute -- a nongovernmental organization dedicated to promoting Korean culture worldwide -- announced Tuesday the winners of a visual contest, titled “Korea Through the Lens,” organized on the theme of Korea’s identity and beauty.

Korean calligrapher Kang Byung-in, who combines his innovative calligraphy and Korea’s traditional sceneries in the clip titled “Beautiful Korea and Hangeul” won the video category’s top prize. Nestle Korea CEO Erwan Vilfeu, who produced a clip titled “An Ode to Korea” shot from the sky using a drone, also received a prize in the video category, while Elodie Bouladon, a student at Le Rosey Boarding School in Switzerland, won the Excellence Award in the video category for “Travel Diary South Korea 2017,” chronicling her travels around Korea.

In the photography section, Latvian Ambassador to Korea Peteris Vaivars, who captured serene images of the rustic countryside in “Nature,” won the grand prize and Curt Olson, an American consultant and former CEO of ING Life Insurance, was awarded for his photo of his wedding in Korea’s traditional costume hanbok. 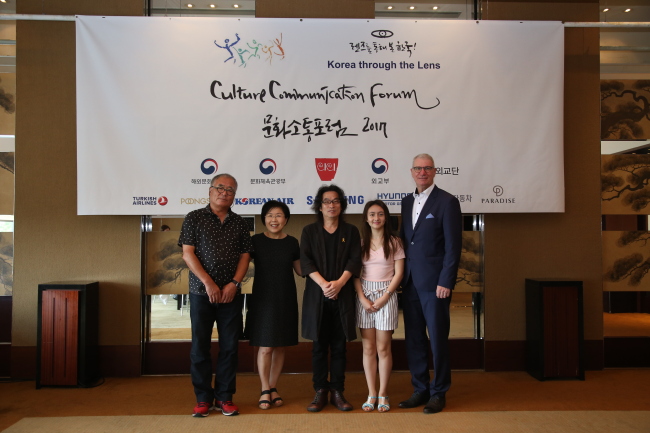 CICI organized the video and photography contest from May 15 to July 16, where foreigners living in Korea and Koreans who wanted to promote Korea‘s image abroad were invited to submit pictures or videos on the themes of “Truly Korean identity” and “Aspects of Korea I Want to Show Foreigners.”

A panel of experts headed by internationally acclaimed Korean photographer Bae Bien-U served as the contest’s jury. The winning works will be exhibited at Gallery Mun at Dongdaemun Design Plaza in Seoul during the month of December. The reception will be attended by more than 300 people, including diplomats, politicians, entrepreneurs and journalists.

The official awards ceremony will be held during the Culture Communications Forum to be held Aug. 29 at the Grand Hyatt Seoul, which will invite influential figures from the media, culture and arts to discuss and promote Korean culture. More than 300 people are expected to attend the gala dinner in the evening.

This year’ Culture Communications Forum is organized by CICI, Ministry of Culture, Sports and Tourism, Korean Culture and Information Service, Ministry of Foreign Affairs and the diplomatic missions accredited to the Republic of Korea.