Last month, the number of employed people hit 26.86 million. While the figure marks a 301,000 increase compared to a year earlier, it also represents the lowest monthly increase since January’s 243,000.

The country’s unemployment rate for June was 3.8 percent, an increase of 0.2 percentage point from the same month last year. 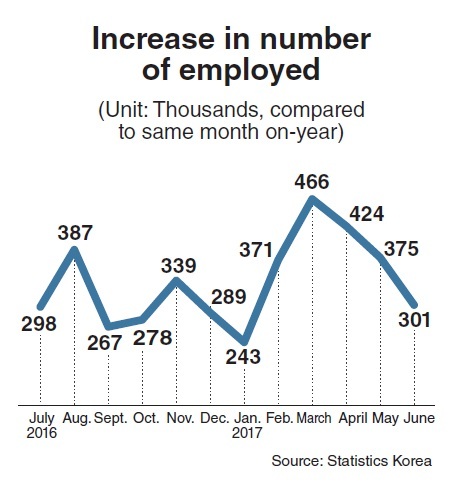 The statistics office attributes the continued increase in unemployment to lackluster hiring opportunities in the accommodation, retail and wholesale sectors.

The number of new employment opportunities listed by restaurants and hotels dropped by 38,000 to 2.26 million last month. While jobs for retailers and wholesalers increased by 8,000 to 3.73 million, the figure falls roughly 52,000 short of the previous month.

As for the younger generation, the data also showed that the youth unemployment rate jumped to its highest level for the month of June. The jobless rate for young people, aged between 15 and 29, was recorded at 10.1 percent, up from last year’s 9.4 percent and from May’s 8.6 percent.

The data suggests that unless the new government takes action on its pledges to increase the number of jobs, youth employment will likely reach 1.3 million by 2021.

The Finance Ministry, citing Statistics Korea data, said the influx of the echo boomer generation is estimated to boost the country’s youth population in the upcoming years. Data showed the population of people aged 25 to 29 was 3.2 million, of which some 95,000 are currently unemployed.

As the echo boomers -- those born between 1991 and 1996 -- enter the job market, the ministry says it expects the population of those aged 25 to 29 to increase to nearly 3.38 million this year. The statistics suggest that unless job availability sees a significant improvement, more than 1 million of these youth will struggle to find employment.

The extra budget is the largest sum requested in eight years and accounts for roughly 6 percent of Seoul’s total budget for the year. The initiative is in line with President Moon Jae-in pledge to create roughly 810,000 new jobs in the public sector during his presidential tenure.

The city government revealed it intends to allocate roughly 135 billion won of the additional budget to create 13,000 jobs for youths, as well as the elderly and those in the 50 to 60 age bracket. A portion of the funds is expected to be allocated to helping women return to the workforce after leaving work due to child care responsibilities.