In the first quarter of this year, the Korea-Housing Affordability Index rose to 59.3, a 0.4 percentage point increase compared to the previous quarter, according to data. The figure marks the highest average rate in more than four years since reaching 59.9 in the fourth quarter of 2012.

The K-HAI represents the loan repayment burden for the homebuyers’ population listed in the median income bracket who have purchased average-priced housing. The index is calculated based on the percentage of one’s income that is allocated to paying off a housing loan. The higher the number, the greater the financial burden. 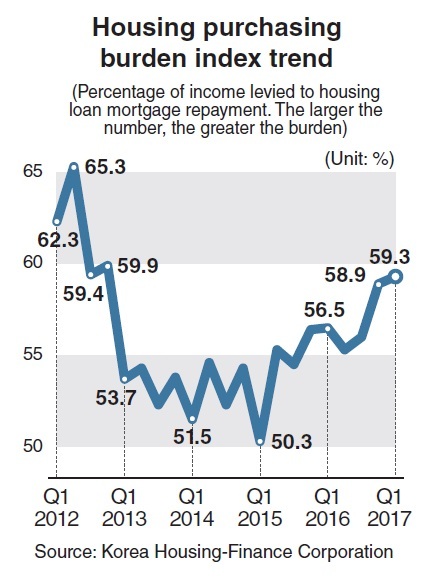 Korea Housing-Finance Corp.’s data also showed that the capital city of Seoul had the highest K-HAI of 103.6, up 1.2 percentage points compared to the previous quarter. The index marks the highest since the last quarter of 2012 when it reached 104.3.

Jeju Island’s K-HAI index rose 6.2 percentage points since the last quarter, reaching 85.1, while Busan and Daegu both surpassed the 70th percentile index at 70.8 and 72, respectively.

Meanwhile, the country’s average housing prices rose 0.21 percent on-month in June compared to the 0.14 percent jump in May, according to the Korea Appraisal Board. Seoul’s housing price rise accounted for 0.66 percent in June, while the government complex hub of Sejong saw the nation’s largest price spike last month at 1.67 percent.