According to data from the Ministry of Trade, Industry and Energy, Korean firms’ investments overseas amounted to $276.1 billion for a decade through 2016, nearly tripling $94.7 billion invested by foreign businesses in the nation over the same period. 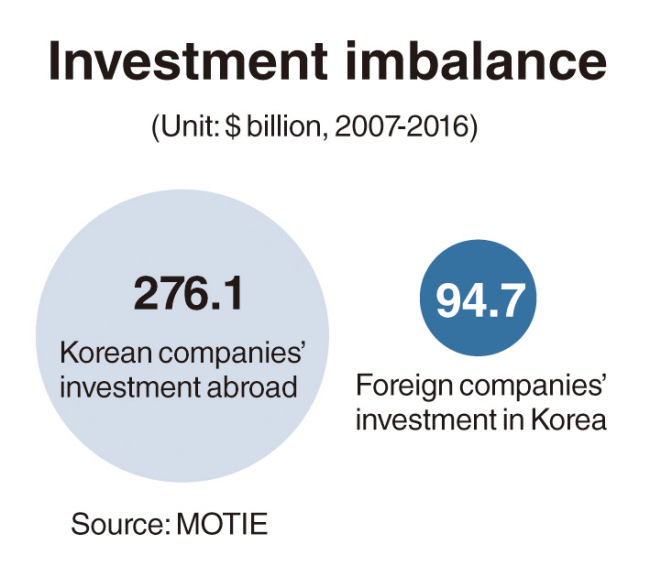 Foreign direct investments that arrived in the country in 2016 remained at $10.4 billion, down 37 percent from a year earlier. New FDI arrivals continued to contract 4.4 percent on-year to $4.96 billion in the first half of this year.

Korean companies created 1.09 million jobs abroad over the period between 2005 and 2015, more than double the number of the country’s young job seekers at 419,000 as of the end of May.

But it has taken few measures to ease regulations on corporate activities and make the labor market less rigid, failing to keep with the global trend in which governments try to create more jobs by encouraging companies to increase investment through drastic deregulation.

“Most major economies, including the US, Japan and Germany, have been pushing for strong regulatory and labor reforms to boost investment and employment,” said Lee Hang-koo, a researcher at the Korea Institute for Industrial Economics and Trade, a state-run think tank.

“Korea’s job policy needs to take this direction,” he said.

Such reform efforts need to be stepped up to reduce the country’s imbalance between outbound and inbound investments.

Experts say it would be all but impossible to settle the country’s employment problems unless the investment imbalance accompanied by a rise in the net outflow of job opportunities is tackled in a more active and persistent manner.

In recent years, Korea has seen a growing number of small and medium-sized enterprises as well as large manufacturing firms moving production abroad to avoid or lessen the burden from a continuous rise in the minimum wage, reduced working hours and the extension of retirement age.

According to the Export-Import Bank of Korea, overseas investments by the country’s SMEs surpassed $6 billion last year, the largest since related data was first compiled in 1980.

Concerns are raised that the acceleration of SMEs’ movement abroad will exacerbate Korea’s unemployment problem, as they hire nearly 90 percent of its workforce.

A law was enacted in 2013 to encourage local companies operating abroad to return home by offering a set of financial, taxation and administrative incentives.

But the number of Korean firms deciding to bring production back to the country fell from 37 in 2013 to 16 in 2014, 9 in 2015 and 5 last year, as such incentives proved ineffective and insufficient.

So far this year, no Korean firm running a factory overseas has chosen to repatriate production, reinforcing the view that the country still has a long way to go in its work to improve the business environment.

Economists note that it will also be hard for Korea to draw more foreign investment if it falls short of making a significant improvement in business conditions. Such work is all the more needed because there will be some external downside risks down the road, notably tightened monetary policies in the US and EU.

Foreign-invested firms accounted for 18 percent and 6 percent of Korea’s exports and employment, respectively. Their investments here in recent years have been mainly aimed at improving existing facilities rather than building new factories.

The country drew $46.5 billion of foreign direct investment over the period between 2011 and 2015, placing 37th in the world.

He particularly called on the Moon government to push ahead with “effective deregulation.”

According to the World Economic Forum, Korea ranked a lowly 108th out of 138 nations in terms of favorable regulatory environment last year.

It also placed 30th among 35 member states of the Organization for Economic Cooperation and Development in terms of easing regulations on foreign investors.

The anti-business tone of Moon’s economic policy has deepened concerns that foreign investment in the country would further decrease during his five-year term, which began on May 10.

The cancellation of the event co-organized by related government ministries was apparently affected by Moon’s campaign pledge to ban the establishment of for-profit clinics.

Moon tried to spotlight what he called his pro-business profile in a gathering with corporate leaders accompanying him on a trip to the US last month, promising to meet them in a more formal setting after returning home.

Attention is now being drawn to a meeting between Moon and heads of the country’s largest conglomerates, which is being planned for late this month, as an occasion to take a more accurate measure of his relations with businesses.