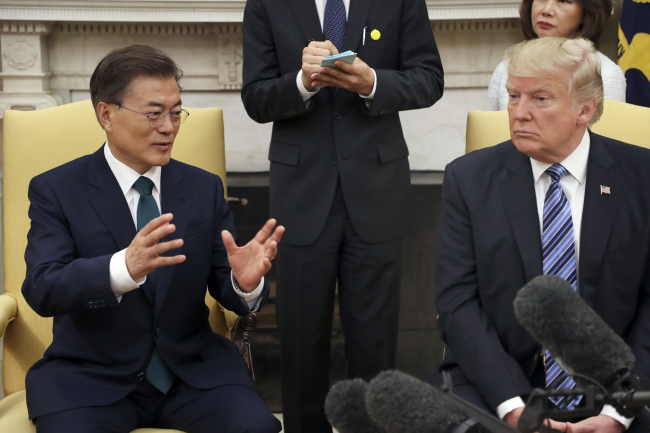 President Donald Trump has accepted an invitation to visit South Korea this year.

Moon adds that the visit will "demonstrate not only our friendship but also the intimate bond our peoples have come to foster through thick and thin.''

The U.S. has been a longtime military ally of South Korea, which faces a nuclear weapons threat from North Korea. But Trump is also concerned about the trade deficit with South Korea, which has grown since a free trade pact began between the two countries in 2012.
___

Trump adds: "Frankly, that patience is over.''

Trump railed against the North Korean government as a "reckless and brutal regime'' as he addresses the media with Moon.

He points to the death of American college student Otto Warmbier, who died shortly after being released from North Korean custody.

Trump says his goal is "peace, stability and prosperity'' for the region, but warns the United States will "always'' defend itself and its allies.

Trump also praises the alliance between the U.S. and South Korea as "a cornerstone of peace and security in a very, very dangerous part of the world.''

President Donald Trump says that he will start to reduce the U.S. trade deficit by renegotiating a trade deal with South Korea.

The United States recorded a $27.6 billion trade deficit with South Korea last year. The deficit began to increase from $13.2 billion in 2011 after a free trade agreement between the two countries took effect in 2012.

Trump said: "We cannot allow that to continue.'' The president is meeting Friday at the White House with South Korean President Moon Jae-in.

Trump made the remarks while in the cabinet room with advisers. Commerce Secretary Wilbur Ross says that U.S. autos, steel and other companies still face trade barriers in South Korea.

While welcoming South Korean President Moon Jae-in to the White House on Friday, Trump said: "We want something that will be very good for the American worker.''

The president says they discussed North Korea and trade over dinner Thursday night.

Trump said: "We are renegotiating a trade deal right now as we speak with South Korea and hopefully it will be an equitable deal, it will be a fair deal for both parties.'' He has called the existing trade deal bad for U.S. workers.

Moon says his presidential election in South Korea was to reconfirm a strong trade alliance with the U.S.

South Korean President Moon Jae-in is back at the White House for his second day of meetings with President Donald Trump.

Moon arrived at the White House for an Oval Office meeting with Trump. Trump and Moon are scheduled to make joint statements later in the morning from the Rose Garden.

The two leaders dined together on Thursday night and Trump said they discussed security issues involving North Korea and trade.

Moon is aiming to show he's serious about dealing with the North Korean threat despite calling for engagement with the North to address its nuclear weapons development.

South Korea's president has laid a wreath at the Korean War Memorial in Washington ahead of more talks with President Donald Trump.

President Moon Jae-in was accompanied by Vice President Mike Pence, whose father served in the U.S. Army during the 1950-53 Korean War.

It was the second occasion during Moon's four-day visit that he has paid tribute to American veterans of that conflict.

On Wednesday, he visited a memorial in Quantico, Virginia, honoring Marines who in 1950 enabled a mass evacuation of Korean civilians, including Moon's parents.

President Donald Trump is welcoming South Korean President Moon Jae-in back to the White House on Friday after the two leaders had dinner Thursday night.

Trump wrote on Twitter that they had a "very good meeting" with Moon and they discussed North Korea and trade.

Trump and Moon will be meeting in the Oval Office and then making statements to reporters.

The U.S. and South Korea want to show that they are on the same page over dealing with the North Korea nuclear threat.